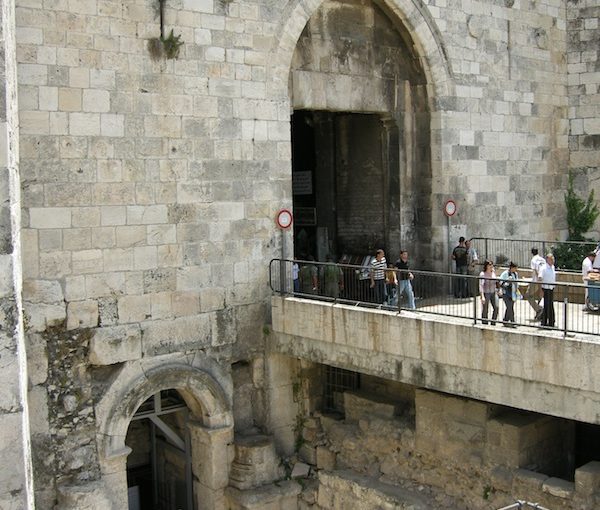 Damascus Gate today and, below it, the Aelia Capitolina arch leading to the Roman Plaza. (photo by Deborah Rubin Fields)

Revenge is sweet. Apparently, while the Roman Emperor Hadrian did not spike enemy heads on palisades, after three years of battle, he did construct an arch celebrating the suppression of the Bar Kochba revolt. This archway was quite detailed, as it marked the northern border of his Jew-less Roman colony (Jews were only allowed in on Tisha b’Av to mourn the temples they had lost) and the Aelia Capitolina, a colony built on the Jerusalem the Romans had destroyed.

Below and to the left of Damascus Gate (built by Suleiman the Magnificent in 16th century CE) are the remains of Hadrian’s Arch of Triumph and his Roman Plaza. Although the site has been explored since 1864 by numerous archeologists, only recently have the Israel Antiquities Authority, the Jerusalem Municipality and the East Jerusalem Development Company (PAMI) cooperated to open to the public the arch that Hadrian ordered built in 135 CE.

The arch seen today was actually part of a three-arched entrance way. Two shorter arches bordered a taller and wider centre one. Only the eastern entrance remains fully intact, along with the bases of what were once elaborate stone pillars. Inside this archway, one still sees the vaulted ceiling and the floor made of large stone slabs.

The thick blocks making up this flooring measure some two metres (6.6 feet) long and 1.2 metres (3.9 feet) wide. To prevent people from slipping on the stones, the Romans striated some of the pavement, which is still in place, albeit worn smooth from use.

None of Hadrian’s building machinery was motorized, of course. Even the Roman tread wheel crane was run on human or animal power. Not one to waste and not one to overlook architectural beauty, Hadrian scavenged the enormous stones of the razed Second Temple and public structures – Herodian stones from the Temple area are distinct in having narrow margins and low, flat, smooth centre bosses. Hadrian used these stones to build two massive guard towers flanking the archway on the right and left.

As the Herodian stones were not attached by mortar, it was probably relatively easy – the average weight of each is said to have been two to five tons – for Hadrian’s gate builders to dismantle the Temple-area stones. These huge limestone pieces still stand, as the remains of the guard towers, neatly stacked at an incredible height of some 11 or 12 metres.

Soldiers throughout history have faced boredom. To counter this, the Roman soldiers in these guard towers played games. One such “board game,” is still scratched into the flooring near the towers.

The gate with its three arches was typical of its period. Just above the remaining arch, one can still decipher the “C” in the Latin inscription bearing the city’s Roman name, Aelia Capitolina. In Jerusalem, a similar example of this kind of gate is the Ecce Homo Arch. It served as an entrance to the eastern forum of Aelia Capitolina. Part of it may be seen today, along the Via Dolorosa.

As further evidence of how well-planned Hadrian’s city was, the gate opened into a plaza, a circular space that was the junction or crossing point of the eastern and western cardines (plural of cardo; literally, heart) or main roads. According to Simon Sebag Montefiore’s book Jerusalem: The Biography, this plaza led to two forums, one close to the destroyed Antonia Fortress and one close to today’s Church of the Holy Sepulchre. There, Hadrian reportedly built a temple to Jupiter.

This gate appears on Jordan’s mosaic Madaba Map. On the sixth-century map – a model of which appears inside the discovered Roman Plaza – one sees an open square with a column just beyond the gate. To prevent anyone from forgetting who was victorious over the Jewish rebels, the column was topped with Hadrian’s figure. On site, there is a model of the column to give current-day visitors an idea of how the column looked. From this column, distances to different parts of the country were measured. Moreover, the column is the source of Damascus Gate’s Arabic name, Bab al-Amud.

To the left of the arch entrance are the large millstone remains from the later Byzantine period. Most likely, an olive oil factory existed there in ancient times.

To the east of the Roman Plaza, there are three other sites worth visiting when such things become possible again, once the COVID-19 pandemic is contained:

Zedekiah’s Cave (also known as Solomon’s Quarry) has visiting hours like those of the Roman Plaza. As the cave has very good acoustics, over the past few years, it has been used to host concerts. The entrance fee is currently 18 shekels. The local telephone is the same as that of the Roman Plaza, 02-6277550. There is partial wheelchair accessibility.

Rockefeller Archeology Museum, on the northern side of the street, recently had a small, but fascinating, exhibit dealing with the 100-year history of Jerusalem Armenian Ceramics. (imj.org.il/en/exhibitions/glimpse-paradise). The museum is free of charge, with hours Sunday, Monday, Wednesday and Thursday, and even on Saturdays. There is a short flight of stairs at the entrance, so contact the curator, Fawzi Ibrahim, about visiting in a wheelchair. The local number is 02-628-2251.

The Northern Promenade route of the Old City’s ramparts allows you to visit these areas from “above,” but is not designed for wheelchairs or strollers. Buy tickets at the tourist office just inside Jaffa Gate.

From the Romans onward, rulers have built special arches marking the defeat of their enemies. Hadrian’s Arch might also have served as a reminder to potential rebels not to try again. What does seem clear is Hadrian has left us with a 1,885-year-old reminder of the many changes of hands Jerusalem has undergone.