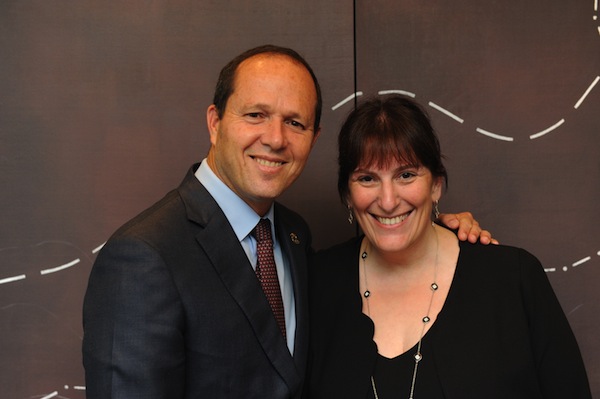 This article is the first in an occasional series about people with British Columbian roots having positive impacts in Israel and elsewhere.

When Nomi Levin Yeshua went to Israel in 1990, she wasn’t committed to staying there. Almost three decades later, the Vancouver-born and -raised woman can look back on a career that has impacted the face of Jerusalem and Israel.

Thanks to a chance meeting over Shabbat lunch with her grandmother’s former neighbour’s sister – “You know Israel,” she said, laughing – Yeshua had barely arrived in Israel when she got a job as assistant to the assistant to Teddy Kollek, Jerusalem’s mayor – but the job was more than that.

Shula Eisner, Yeshua’s new boss, had been working for Kollek since 1965, just before he began his 28-year run as mayor. Kollek was chairman of the Israel Museum and, before that, had served 11 years as director general of the prime minister’s office under David Ben-Gurion. In that role, Kollek effectively created almost all of the government agencies in the new state.

“One of the things he believed was that there had to be a national museum,” Yeshua told the Independent recently while in Vancouver for a milestone birthday of her mother, Shanie Levin. “He went around raising money to start the Israel Museum. He had an office there and [Eisner] was originally hired there to work with him with all the foreign donors. Then he was elected mayor and he kept to the Israel Museum office.”

In 1966, Kollek founded the Jerusalem Foundation, where Yeshua now works.

“That was his way of creating a forum for supporters of Jerusalem around the world, to be part of creating a new vision for Jerusalem. Then, a year after that, with the Six Day War and the reunification of the city, suddenly everything was just multiplied,” she said.

Yeshua acknowledged that Kollek’s multiple roles as mayor, head of the national museum and leader of a major foundation would probably not be sustainable today, but that was a different time.

To accommodate his different hats in the era before email or even fax machines, there was a driver who shuffled between offices, taking papers back and forth.

When Eisner moved over to another foundation, she handed her baton to Yeshua, who worked with Kollek through his last years as mayor and continued until a few months before he passed away, in 2007. She continues to run all donor relations for the Jerusalem Foundation and she personally handles Canadian fundraising for the organization.

The Jerusalem Foundation was started by Kollek because he saw that Jerusalem was a very poor city.

Kollek pioneered a fundraising model that is now almost universal across Israeli and Jewish philanthropy.

“He connected every donor to a specific project and they knew that their money went to that project and they could come – and now their grandchildren come – and see those projects. To this day, they can still track the money. The Jerusalem Foundation was really at the forefront of that movement of changing the way people were giving to Israel. Now, it’s taken for granted, but it wasn’t back in the late ’60s and early ’70s at all. That was Teddy,” she said. “He wanted people to feel personally connected to the city, to the project, to the place.”

The foundation emphasizes “shared living” and is now focused on a vision for 2030.

“This is a city that is completely about how to exist together in this space that we share. It’s not just Arabs and Jews. It’s also secular and religious, it’s poor and rich, it’s all kinds of divisions that exist in the city,” she said. “But how do we share and how do we understand each other better?”

One major project is Hand-in-Hand School for Bilingual Education.

“Bilingual education is something that Canadians completely understand but Israelis less so. This is a school that teaches in Arabic and in Hebrew, in mixed classrooms. The rest of the Israeli education system is – we don’t like to use this word but it’s the truth – segregated,” she said. “There are Jewish schools, there are Arab schools and then, even within the Jewish schools, there are religious and nonreligious. This school brings together all of the different population groups and at all times there is an Arabic-speaking and a Hebrew-speaking teacher in the classroom.” There are now six such schools around the country.

Another area of the foundation’s work is helping the most vulnerable populations in the city, through projects such as Springboard, which develops programs primarily through the education system to push gifted kids into opportunities their financial situation might not otherwise permit.

The Jerusalem Foundation is also the city’s second-largest funder to the arts, after the municipality.

“We really believe that a modern and thriving city should have a good cultural scene. Culture is not just for one population group. All members of the community should be cultural consumers. But you have to create culture that is appropriate for those people,” she said. “For example, there is a dance troupe for ultra-Orthodox women. They only perform for women, of course, because otherwise that wouldn’t work for them. But they’re really doing amazing stuff and giving these ultra-Orthodox women who want to dance an opportunity to have a really high-level, professional dance troupe within the system that works for them.”

The foundation is also building a new Hassadna Conservatory of Music.

Yeshua credits her Vancouver upbringing as foundational to her worldview and accomplishments. She grew up in the Habonim Dror Zionist youth movement and was a camper, counselor and camp director at Camp Miriam. At home, her Jewishness was nurtured in a pluralistic way.

“In terms of how my mother brought us up, Jewish identity wasn’t limited to our religious identity,” she recalled. “National identity was something that was acceptable, cultural identity was very much encouraged. I think growing up in the very open community of Vancouver – to me it always seems that way, at least – it allowed me to be Jewish in a way that I felt good with and it wasn’t only one way to be Jewish.”

“I want people to understand that there is a way to engage with Israel, to support Israel, and not contradict your own value system or what you think is acceptable,” she said. “What we do with the Jerusalem Foundation is something that people can respond to, relate to, understand – to protect Jerusalem as a city that is for everyone.”