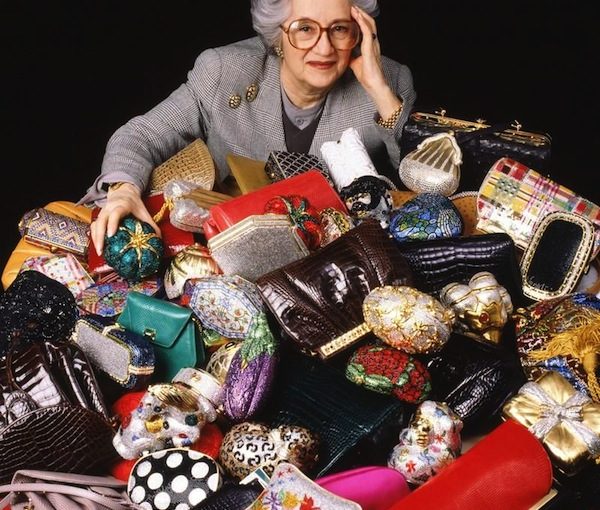 Many of us gravitate towards objects that are bright and sparkly. Creating this magic in one handbag is what Judith Leiber, née Peto, accomplished.

Judith Peto was born in Budapest, Hungary, in 1921. Her mother, Helene, from Vienna, was a homemaker and her father, Emil, from Hungary, was a commodities broker. Together with her sister, Eva, the family had a bourgeois lifestyle.

Discovering that their teenaged daughter had a good head for numbers and academics, they sent Judith to London to study chemistry, with the hope that she would acquire a university degree and work in the cosmetics industry. Part of the reason they sent her away to school was a concern about her safety in case of a war. However, the distance from her family proved too difficult for Judith and she soon returned home.

She landed a job at a handbag company and, over the years, her father would bring her an assortment of unique handbags from his many travels around the world, thereby initiating Judith’s collection.

Learning the art of handbag-making from start to finish allowed Judith to become the first woman to join the Hungarian handbag guild; she gained the title of a true craftsman.

Judith and her family escaped and survived the Holocaust due to her father’s large circle of connections. He was fortunate to obtain a Schutzpass, a document that secured the bearer safe passage, giving the family, together with 26 others, access to a house set aside for Swiss citizens, where they could live. They ate what they could, slept on the floor and never left the security of the house.

“People in Budapest and my parents, especially my father, did one thing and then another to keep us safe, or as safe as we could be when everyone wanted to kill us,” Judith told the Jewish Exponent in a 2013 interview.

When Hungary was liberated, the family moved into a basement that was home to 60 survivors. Rebuilding the life they once knew was their goal. During this time, Judith met and fell in love with an American soldier, Gerson Leiber. Against her parents’ wishes, she married him in 1946 and the couple moved to the United States.

The young new immigrant had no intention of staying home and becoming a traditional housewife. With her knowledge and skill in making handbags, she got her first job at Nettie Rosenstein, a fashion designer. Working her way up in the company, she was commissioned to make a handbag to match the inauguration dress of the first lady, Mamie Eisenhower. The bag received high regard and this milestone, after 12 years of hard work, gave her the impetus to start her own brand.

In 1963, she launched her company with her husband and partner by her side, overseeing the business and operational duties. An avid artist himself, a painter, they were an unstoppable duo. In the 7,000-square-foot loft that became their studio, countless creations were brought to life, handbags that epitomized glamour, every piece an original, made with crystals and beads in shapes of animals, fruit and other objects.

A Judith Leiber handbag became a first lady tradition for the inauguration ball. Some A-list Hollywood stars put more thought into their Leiber handbag than their dresses, knowing it would be the focal point of any attire. One handbag could cost anywhere from $3,000 US to $20,000 US.

“That is what people pay for – quality,” Judith told the Exponent.

And quality was what she prided herself on, each bag being made by specialist craftsmen under Judith’s watchful eye in New York.

Her label brought in millions of dollars in sales each year and there was a waiting list for her creations, with women around the world wanting a timeless bag to wear and/or display as part of their home décor.

The company was sold in 1993, with Judith staying on as the head creator. She enjoyed her new life, moving out of New York and settling in East Hampton, N.Y., with her husband, “Gus.”

Over her career, Judith received numerous design awards and had her work exhibited in some of the world’s most renowned museums, including the Smithsonian, the Museum of Modern Art and the Metropolitan Museum, to name only a few.

In addition to being displayed elsewhere, there is the Leiber Collection museum in East Hampton, a project set in motion by Gus.

The Leibers were married for more than 70 years. Their earthly love story endured until 2018, when they died within hours of each other, both of heart attacks.