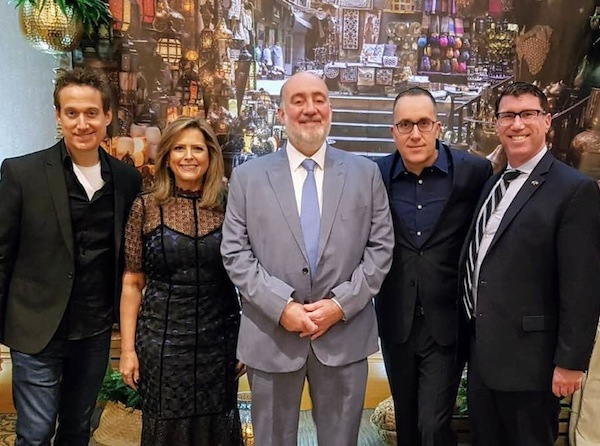 The diplomatic cold shoulder Israel has received from African, Asian and Arab countries has been thawing in recent years, and a former Israeli ambassador to the United Nations says the situation is even more encouraging under the radar screen.

Ambassador Ron Prosor, who was the Jewish state’s representative at the world body from 2011 to 2015, spoke at the Jewish National Fund of Canada’s Negev Gala Sunday night.

The UN General Assembly is a den of hypocrisy, Prosor said, citing the presence of the most oppressive countries on committees dealing with human rights. The UN Human Rights Council has been dominated by states with the world’s worst human rights records. Moreover, the council, which is supposed to be concerned with human rights abuses all over the world, has a specific article that singles out only one country for routine, ritual denunciation.

“Surprise, surprise – Israel,” Prosor said. “The structural and institutional bias against Israel is unbelievable. There is stuff that I can’t even invent. The Saudis chairing the conference on the status of women. The Iranians … they’re deputy chairs on nonproliferation and arms control.

“What is amazing is not the bad guys,” he continued. “The bad guys are easy to explain. What is really difficult to explain is the so-called like-minded countries.”

European nations and some of the other democracies that make up a minority of the countries at the General Assembly routinely side with despotic regimes against Israel. In such a situation, small victories count heavily. Prosor took heart when countries opted to abstain from votes rather than side against Israel.

He shared an anecdote about Pablo, the ambassador of Panama, an apparent reference to Pablo Antonio Thalassinós.

“‘Pablo, are you with us on this vote? Are you going to vote for us?’” Prosor recounts asking. “‘No. How can I vote? The Arabs are threatening me. What do we do?’ I look at Pablo. He looks at me. I say, ‘Pablo, I feel you’re beginning to catch the flu.’” In the story, the Panamanian begins to cough.

Prosor shared stories of similar conversations with other ambassadors, convincing them to abstain or not show up for votes, and even making him their proxy vote in these latter instances.

While a great many votes relating to Israel are still deeply lopsided, he said, ambassadors like him have helped some others understand that abstaining is better than a no vote.

Behind the scenes, Israel is not the isolated pariah it appears, he contended.

“In essence, Israel talks with everyone,” Prosor told the audience at Schara Tzedeck Synagogue. “The only ones we do not talk to, or I didn’t talk to, are the Syrian ambassador and the Iranian ambassador. We talk to countries that you guys would be amazed. First of all, most of the Arab countries, countries that we don’t have diplomatic ties with. As the Germans would say, we don’t have to kiss each other on the main road.”

“The ambassador of India loves Israel,” he noted. “India votes against Israel in every committee and every subcommittee. When we hit the atomic reactor in Syria, the ambassador came to me, ‘Ron, amazing work. It’s good that you showed them.’ Then he goes over to the Security Council [and says], ‘We absolutely condemn Israel.…’ So, there is a difference between relations and voting patterns.”

Relations between Israel and the Sunni Arab world are changing dramatically, he said, due to shared concerns over the Shiite theocracy in Iran.

“I can tell you that what you see happening now in the Arab world, the Sunni world, is something that has been prepared for many years,” he said. “What you see now is not because the Sunni world – the Saudis and the others – really give a toss about the Palestinians. They fear that the rope is tightening around their necks because of Iran and they have decided they have coinciding interests with Israel. I don’t care why – this is an amazing opportunity for us to coordinate and cooperate.”

Prosor remains defiant despite the pillorying his country continues to receive at the world body.

Of the 193 countries at the UN, he noted, only 87 are democracies. Twenty-two are members of the Arab League, 56 are part of the Organization of Islamic Cooperation and 126 countries are part of the so-called nonaligned group. By contrast, Israel is the only country at the UN that is not a part of any regional grouping. This means Israel cannot sit on any committees or subcommittee of the body.

In such a context, he said, humour and sarcasm go a long way. Elon Gold, a comedian who followed Prosor on the bimah Sunday, remarked that the ambassador was funnier than he was. Prosor shared stories of what seem like diplomatic pranks.

“There are six [official] languages at the United Nations,” he said. “One of them is Arabic. I had, on my team, Arab speakers. I decided to tell them that they have to speak and respond in the different committees in Arabic. Suddenly, someone presses the microphone and, in Arabic, bashes the Arabs. Arabs don’t know what’s happening. Europeans are surprised. They don’t know where it’s coming from.”

Overall, the ambassador said, things that are not clearly visible bode well for the future.

“Under the radar screen, there is huge support for Israel,” he said. But, he warned of evolving tactics by Israel’s enemies to weaken it.

“The battle that we are in may be the toughest battle that we’ve been in since the beginning of the state of Israel,” he said. “They tried to take us out with military means and that didn’t work out. They tried economic boycotts. Today, they are trying to put a wedge between Israel and the Jewish communities abroad, going after the mutual values that we all respect, that we all live with. It’s lies, half-truths, Chinese torture – drop, drop, drop – and we have to be out there and call it and fight it and not look away. We have to confront it and work together.

“Inside the United Nations, I saw flags of 193 countries,” he concluded. “I saw 15 flags with a crescent on them, 25 flags with a cross on them but only one flag with the Magen David, and we should all work, every day, to make sure that this flag flies strong, high and proud in the family of nations where it belongs.”

Funds from the event will support an animal-assisted therapy centre in the city of Sderot, where children and adults live with post-traumatic stress disorder due to years of rocket and mortar attacks from nearby Gaza. The project was described to the audience by Lance Davis, chief executive director of Jewish National Fund of Canada.