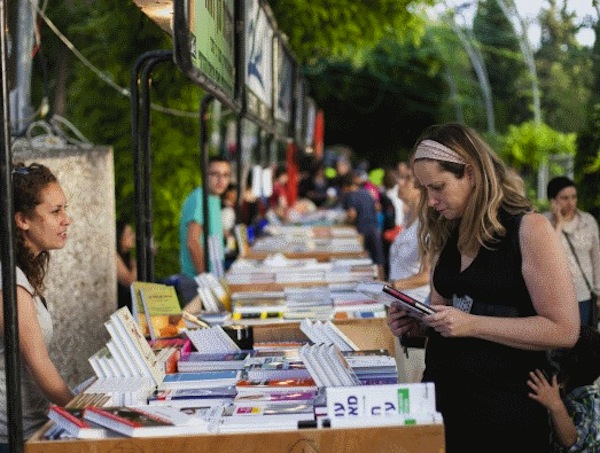 National Hebrew Book Week has taken place every year in June. Its fate for this year, in light of the COVID-19 pandemic, is unclear. (photo from gojerusalem.com)

In Israel, you know Shavuot is approaching when you see the grocery stores setting up displays of pasta and spaghetti sauce. The pandemic shouldn’t change that.

Israelis are obsessed with the thought of eating non-meat meals on Shavuot. I suspect that at the heart of this obsession is the feeling that, even today, many people still consider eating a non-meat meal equivalent to eating less than a full meal. Hence, the worry that there really will be a satisfying meal to appropriately celebrate the holiday.

While there are many lovely explanations about why we eat dairy on Shavuot, they seem to be secondary to some practical considerations. As Rabbi Prof. David Golinkin points out, in the late spring, young calves, lambs and kids are weaned. Thus, historically at this time in Europe, there was an abundance of milk. Bear in mind that refrigeration is a fairly new process and that, prior to refrigeration, farmers needed to move fast with perishable milk. They made cheese and butter, which, likewise, needed to be consumed relatively fast. This dairy excess may have motivated some Jews to eat dairy on Shavuot. (See the article “Why do Jews Eat Milk and Dairy Products on Shavuot?” on the Schechter Institutes’ website, schechter.edu.)

But, eating a non-meat meal on Shavuot is not restricted to the customs of European Jewry. As Jewish food expert Claudia Roden notes in The Book of Jewish Food: An Odyssey from Samarkand to New York, Sephardi Jews in Syria made cheese pies called sambousak bi jibn, Tunisian Jews had a special dairy couscous recipe and, in places like Turkey and the Balkans, Jews prepared a milk pudding called sutlage for Shavuot. (If you don’t want to eat animal-based foods, you don’t need to feel left out. The United Kingdom’s Jewish Vegetarian Society helps you enjoy a variety of traditional, but vegan, cheesecake recipes.)

So from where did all this dairy focus originate? One appealing explanation reminds us of what was supposed to have happened on Shavuot, namely that the Jewish people received the Torah. In Gematria, the Hebrew word for milk (chalav) adds up to 40, the number of days on which Moses stayed on Mount Sinai in order to receive the Torah.

Significantly, studying the Torah and other Jewish texts on Shavuot eve has become a major trend in Israel, as well as in the Diaspora. The big Israeli cities offer any number of options for participating in a tikkun leil Shavuot. These free learning sessions welcome the participation of all of Israeli society, from the religious to the secular, and everyone in between. Those living in smaller towns and on kibbutzim and moshavim likewise hold study sessions on the night of the holiday.

The idea of all-night studying originates with the kabbalists. The earliest members of this group apparently studied with Rabbi Shimon bar Yochai, the author of the Zohar, who lived in the second-century CE. It was this scholar (also known by his initials, as Rashbi) who stated: “G-d forbid that the Torah shall ever be forgotten!” (See the Babylonian Talmud Tractate Shabbat 138b.) By the Middle Ages, the kabbalistic all-night Shavuot study had really picked up steam in places such as Safed.

Some claim the reason for studying during the night is found in the midrash stating that it was a way to correct for the Children of Israel’s mistake of oversleeping on the morning they were meant to receive the Torah. Others claim, however, that the Hebrew word tikkun should not be translated as correction, but rather as adorning or decorating the bride. The bride in this instance is the people of Israel and the groom is either G-d and/or the Torah.

According to a late 17th-century Libyan tradition, Shavuot symbolizes the wedding day between the people of Israel and the Torah. According to this tradition, the Torah is the bride, which explains the title of the Libyan Shavuot text entitled Tikkun Kallah. Accordingly, those who read this tikkun are likened to bridal attendants.

The importance of studying on Shavuot is bolstered by the fact that Israel’s Hebrew Book Week (or, in some places, Book Month) begins right after Shavuot. I do not believe this occurrence is coincidental, but rather links us to the idea that we are still the People of the Book and a people of books.

The Israeli book fair has been running for many years. This year, 2020, would mark the 59th annual celebration of Hebrew Book Week and the fair’s age is all the more impressive when you recall how shaky was the Israeli state’s start as an independent entity. Recent years’ events have included Israeli authors appearing in coffee houses, story hours and plays for children, guided walks in Israel’s National Library, the more traditional book signings and, of course, the possibility of thumbing through thousands of Hebrew books.

In brief, our spring holiday offers opportunities for both spiritual and physical nourishment.