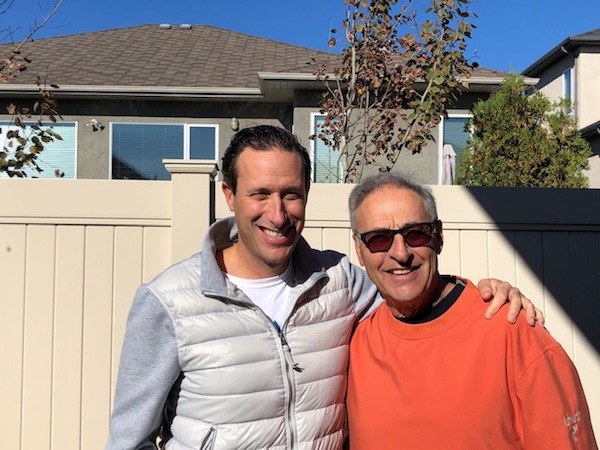 Father and son, Peter Leipsic and Jonathon Leipsic, are chairing the Jewish Federation annual campaigns in their respective hometowns. Peter is co-chair, with Neil Duboff, of the Winnipeg fundraising effort, while Jonathon is in his third consecutive year of leading the fundraising here in Vancouver.

For Peter, “growing up, helping others was something that just got ingrained in you. You see somebody in trouble, you reach down and help them. My father served in Europe and following in his steps I went to Israel as a volunteer, in the ’67 war. It was just an automatic.

“I remember being at our synagogue and … on the cover of Time Magazine, I guess May of ’67 … there was a picture of 800 Syrian tanks, 600 Egyptian and Iraqi…. It made Israel look like they were going to be toast. At the synagogue, they were asking for money from all the members and I remember the cheques being torn up and being returned to people … saying, that, ‘No, we’re not interested in this. We’re interested in a cheque that hurts. Don’t give us your $1,000…. We want $10,000.’

“When I saw that,” said Peter, “I was probably 21. I think that just sort of instilled in me how to look out for the underdog. People would make fun of me for handing out money to people on the street and I’d say to them, ‘Where are you sleeping tonight? Are you having a shower or not?’”

Peter has been raising money for the Combined Jewish Appeal (CJA) for more than 50 years now, and he has learned that, with some people, giving is automatic, one doesn’t even need to ask. “In the end, we all end up in the same place. Eventually, I don’t know where the cemeteries are in Vancouver, but, in Winnipeg, they’re in the North End – we’re all going to end up there, and you ain’t taking it with you!”

The Leipsics do their best to help out beyond the Jewish community, as well. Peter established a scholarship program at Winnipeg’s Gordon Bell High School, where applicants are judged, not according to scholastic achievements, but on how much of a mensch they are. This past year, there were nine recipients – the highest number yet. “They sent the bios on these people, and, they were just gut-wrenching,” said Peter. “After reading the bios, I said, ‘OK. Can I add another $1,000?’ And, of course, I sent [the list] to Jonathon, too. Well, I raised it to $6,000 and Jonathon doubled it, up to, I think, $11,000. So, instead of them getting $400 per person, they each were given $1,018. And Jonathon, of course, explained to them the significance of 18 in Jewish life. To me, I’m tickled … to actually be able to see somebody’s face, and how I changed that face – taking a massive weight off of them.”

While both Peter and Jonathon are calling on people to help, they each have their own unique styles, with Peter being more direct and Jonathon having a more diplomatic approach.

“I probably burned a couple of bridges,” said Peter of his method. “When you know that somebody has the ability and you tried to explain to them the need, yet they back off and they back off … and, at some point, they say, ‘Do you want me to hang up on you now?’ Some people just don’t get it.”

Even in times such as these, some people, like the Leipsics, are downplaying the negative aspects and focusing on the needed work at hand.

“I mentioned in my campaign opening address that we, the Jewish people, certainly have known challenges greater than COVID,” said Jonathon. “While the challenges are profound, I always like to remind people that, even though, in the last 1,000 years, the challenges were seemingly insurmountable, we overcame and moved from strength to strength by never forgetting our call from Sinai and the centrality of community and Klal Yisroel. I think that COVID has been an eye-opener for people of my generation and younger. It has to start at home, I think.”

Jonathon said that he has really learned from his father’s commitment and that it has set the tone. “We’re taught in our homes and taught through Torah … we have to make community a priority, and my father has always done that,” said Jonathon. “Whether he does it by giving more, giving his time and whatever we were in the position to be able to do, he made those decisions up front – not after all our spending was done, rather at the beginning. ‘First things first,’ as they say. He showed me the way to a life of tzedakah, commitment and meaning…. To be in the same position with him, I think, is actually really, really special.”

Having had the benefit of helping fundraise in Winnipeg, Jonathon understands the different challenges that exist in Vancouver. “We have a bigger community, but it’s spread out,” he noted. “And, as a result, the binding of the community is less tight than it was when our community was more closely tied to Oak Street [in the past, and in] the North End of Winnipeg.”

Learning from both campaigns, Jonathon said, “We work together and do what we can. At the end of the day, food security and access to safe housing is becoming more and more challenging. And then, the isolation with COVID, obviously, is really profound with the elderly and those who can’t get out…. I can imagine, when it’s raining all winter or cold, the social isolation will become even more profound … the potential [effects] it can have on them, but also, their sense of community. I think, more than ever, these sorts of community initiatives are essential.”

“If you want Jewish life to continue,” Peter added, “you must reach down and support the people that are in need. You never know who the next leaders of your community are going to be. A lot of people that have received help had nowhere else to turn, and they may turn out to be your future leaders.”

As far as both Leipsics are concerned, Judaism is defined by the talmudic words, Klal Yisroel areivim zeh bah zeh (all of Israel is a guarantor for one another).