At risk of universalizing a book with a particular theme, The Aging of Aquarius: Igniting Passion and Purpose as an Elder is valuable not just for those who are retired or pondering it – though it has plenty of age-specific content for that demographic. At root, it is a book about living well, and that makes it a valuable volume for people of any age.

Author Helen Wilkes, a Vancouverite and member of the Or Shalom community, has penned an optimistic, uplifting book. But let that not deceive the reader, she warns early on, into misjudging who she is.

“Lest you think I was born with a silver spoon in my mouth or that I am one of those insufferably cheerful people,” she writes in the preface, “permit me to introduce myself.”

She talks about being born to Jewish shopkeepers in a village in the Sudetenland, part of Czechoslovakia that was among the first places occupied by the Nazis in advance of the Second World War.

“Our village fell to Hitler when I was still in diapers and, as a consequence, I have spent a lifetime with fear and negativity as my constant companions,” she writes.

Her childhood was lonely and her parents uncommunicative. Her marriage ended when her daughters were 3 and 4 years old.

“Divorce at the time was still so shameful that it took my mother several years to accept what she and her friends labeled as my ‘failure as a woman.’”

Yet Wilkes pivots to optimism.

“If, despite a childhood in the shadow of the Holocaust, and if, despite a lifetime of experiencing myself as an outsider with little sense of self-worth, I have found cause to hold my head high and to face the future with optimism in my retirement years, there is reason for others to hope,” she writes.

This is not a handbook on aging so much as an illustration by example of how to do it right. She does acknowledge, though, that a person has to make the effort to age well. Each section of her book ends with ideas and actions that might help on the path to success.

“Everywhere, there are opportunities to meet new people, yet surveys indicate that social isolation is a major problem despite the fact that simply joining a club is as good for your health as quitting smoking, exercising or losing weight,” writes Wilkes, who has a PhD in French literature. “The Vancouver Foundation reports ‘a precipitous decline’ in how many people made use of libraries, community or recreation centres in 2017, that only about one in four people took part in any kind of community or neighbourhood project.… And that, in a city as diverse as ours, only about one in four people attended an ethnic or cultural event put on by an ethnic or cultural group different than their own.” 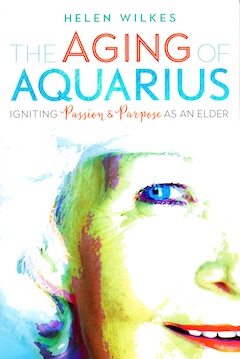 Finding joy in the simple things – again, good advice for people of any age – is one of her key findings.

“Aging has made me a connoisseur of life,” she writes. “It has taught me to savour not what is rare or high-priced, but what is ordinary. The small moments that sometimes overwhelm me with heart-stopping joy. An incredible blue-sky day. The first sip of my morning coffee. The laughter of family and friends. Whenever I am walking in the woods with a boisterous dog, whenever I sit on a log at the beach while the sun dips slowly below the horizon and paints the sky with hues no artist could capture, whenever I stroll through a harvest market where farm-fresh produce overwhelms with its rich ripeness, whenever my grandchildren burst through the doorway to give me a hug, or whenever I am engaged in any number of absorbing activities, I so often have an overwhelming sense of not wanting to be anywhere in the world except exactly where I am at this moment.”

While she challenges the conceptions some people have of retirement as a time to sit in a hammock with a fancy drink, she does also acknowledge that, as Danny Kaye said, “to travel is to take a journey into yourself.”

She talks about an eye-opening trip to China, where she went as a chaperone to her 10-year-old twin grandsons. Having heard of the panoply of human rights abuses in China, she was shocked to see an English-language newspaper with a headline asking “How dare they?” above an article cataloguing racism and human rights abuses in the United States and other “free world” countries. Having heard about China’s reputation as a major contributor to global warming, she was pleased to see solar panels and wind turbines throughout the country. The rapid transit system they used to get everywhere contrasted with what she is familiar with in Vancouver.

“China held up a mirror that led me to reexamine the history I had been taught in high school and university,” she writes. “Day by day, it became more difficult to view the West as having brought enlightenment to backward Asians.”

Wilkes acknowledges that not everyone can travel to foreign countries and says there are ways to experience some of that diversity without getting on a plane.

“Next week, I anticipate attending a Hindu baby-naming ceremony to which I’ve been invited. Last week, I was invited for dinner at the home of a Muslim family from Pakistan. Being at their table, sharing our limited knowledge of one another’s culture, these to me are opportunities for much more than just personal enjoyment or emotional enrichment. They are occasions where it is possible to create a gram of kindness in a world where political and regional and religious differences tend to divide rather than link. I never fail to feel uplifted by experiencing our common humanity writ large. When I can no longer travel, I hope I will still reach out to people from other lands as graciously as people elsewhere have reached out to me,” she writes.

She speaks about another trip – this one to Berlin, for the launch of the German translation of her previous book, Letters from the Lost: A Memoir of Discovery, which explored her survivor’s guilt as she discovered, in adulthood, a cache of letters from family left behind in Czechoslovakia after she and her parents fled just after Nazi occupation of the Sudetenland.

“In Berlin, forgetting is impossible,” she reflects. “Over the years, Germany has made remembering an art as well as an official policy. Germany tells the world that it is only by remembering the past that we have any likelihood of avoiding similar mistakes in the future. The reminders are unavoidable. In Berlin, history is omnipresent. Even the sidewalks are studded with Stolpersteine, raised stumbling blocks inscribed with the names of Jews who once lived in the adjacent buildings.”

Since so many people’s identities are entwined with their profession, she writes, moving into retirement, for many people, can demand a complete reinvention of self. She proceeds to ask a litany of questions about what identity means, and even, as a member of a particular culture, what culture means.

“Such questions and many more continue to haunt me as I age,” she writes.

And, while she turns to books for answers, the process of asking questions may be an end in itself when addressing the existential issues the book confronts.

Among everything else it is, The Aging of Aquarius is also a very Jewish memoir. Both in her personal history and in the theological exploration she discusses near the end of it, her Jewish identity and experiences play central roles in the story.

At a book launch at Or Shalom on Nov. 4, Wilkes said she approaches the later years of life with many unanswered questions. But, as difficult as finding answers may be, she suggested responding affirmatively.

“I know it’s not easy, but if the answer to how is yes,” she said in conclusion, “let us all say yes to life. Yes to aging. L’chaim.”