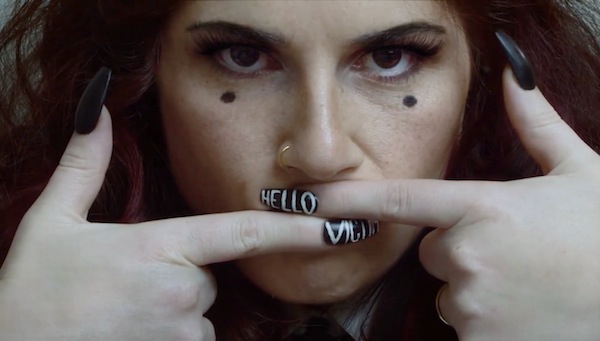 Megan Emanuel of the band Hello Victim. She and bandmates Adam Wilson and Spencer Daley released the single “Out of It Alive” on April 2. (photo from Megan Emanuel)

“The concerts benefit local artists who have lost their income due to COVID-19 gathering restrictions,” Emanuel wrote in an email to the Independent. “Our weekly goal is $1,000 to split amongst the artists … to cover things like groceries and basic bills. Anything over $1,000 is donated to the Greater Vancouver Food Bank.”

The next concert will be live on Instagram (@parksoundbc) on May 2.

“Of course, the money isn’t the only important thing,” Emanuel noted, “and some of our favourite feedback from audience members has been their appreciation of the ability to feel somewhat ‘normal’ for a couple of hours, like there’s still a vibrant arts culture in Vancouver.”

“When the pandemic hit, it was immediately apparent that musicians were going to be hit extremely hard,” Emanuel told the Independent. “Many artists work service industry jobs in order to maintain a lifestyle that allows for gig work and touring, and the rug was just pulled right out from under them and there seemed to be a need for relief. I contacted Andy because he is an organizational phenom and pretty familiar with putting shows together since Park Sound was hosting monthly showcases prior to all of this. We pulled the first virtual concert off days after chatting about it and were able to raise $1,200 overnight. Things have taken off immensely since.”

In addition to helping others, Emanuel is working on her own musical career. Hello Victim – comprised of Emanuel, Adam Wilson and Spencer Daley – released the single “Out of It Alive” on April 2. Produced and mixed by Ben Kaplan of Fader Mountain Sound (Mother Mother, Five Alarm Funk, Ninjaspy), the song is described as “a dramatic anthem for survivors of abuse.”

“We’ve all met the person this song is about,” Emanuel says in the press release, “That person who gives you a creepy ‘something about this is very wrong’ feeling in your gut.”

Ultimately, the song has a positive message. She explains in the release: “For those of us who are unlucky enough to become entangled with these types of people, times can get pretty scary and that toxicity stays with you for some time, even after they’re gone from your life…. This song is kind of like the phoenix’s flight; it’s the catastrophic rebirth from that very dark place when you realize that none of us gets out of this life alive, and the only justice that is in our individual power to serve is choosing to reject toxicity, move on from these people, and stop letting them live rent-free in our heads.”

Emanuel told the Independent that she first met Wilson in February 2018, while on an early-days date with her now-fiancé. As co-owner of Park Sound Studio, Ponich had been hired to handle sound for a music event at Luppolo Brewery, she said. “He texted me at some point during the night because my place was about a 10-minute walk away and, when I got there, I was introduced to a couple of his friends, one of whom was Adam (who he was playing in a band with at the time). Serendipitously, I’d made a Facebook post a matter of days prior along the lines of ‘girl seeks guitar player to write tell-all album with.’ I had just gotten out of a less-than-ideal relationship and I was at this point where I was ready to pull an Adele and sing about it where everyone could hear…. It took about five months for us to start working on music together.”

Emanuel liked the electronic compositions Wilson was creating for his Instagram stories, so she asked him if she could write a vocal melody and some lyrics for his music and, she said, “it took off from there and we went on writing remotely for awhile, sending each other voice notes of ideas over WhatsApp. When we started writing our song ‘Feel Slow,’ which we released back in July of 2019, Adam suggested we talk to his other bandmate Spencer about helping us out with writing a bass line. After working with him on that one tune, it was pretty clear he belonged in the band.”

Soon after the trio had finished a few songs, they were offered a spot at the Railway Club, which they accepted. “That ended up being my first live performance in eight years!” said Emanuel of that early 2018 gig.

“I learned a little while ago that I suffer from severe generalized anxiety disorder, so jumping back into live shows was a massive hurdle I had to figure out how to jump quite quickly,” she said. She attributed some of her ability to overcome that hurdle to Wilson and Daley, who, she said, “are not only incredible musicians, but amazing human beings who consistently make me feel safe and confident on stage.”

Emanuel has been in music since she was a kid, “with piano and voice lessons beginning at around 9. Pat Covernton taught me piano and Wendy Stuart was my voice teacher – both taught me for about 10 years. I also spent many, many summers in Gotta Sing! Gotta Dance! at the JCC and participated in the Jewish Federation’s events for Yom Ha’atzmaut, Yom Hazikaron and Yom Hashoah.

“Since I can remember,” she said, “being a musician is literally the only thing I’ve ever been able to identify as my ‘dream.’… I started writing music when I was 14 and went on to play small venues throughout Vancouver. In my last year of high school, I participated in the JCC’s Battle of the Bands and became the first and only solo, non-rock artist to win first place.

“After high school, I began traveling – first to Israel, then New York, then Melbourne – which meant that I put performing my music on hold, but continued to write in the absence of an audience.”

“I think my Jewish day school upbringing shaped the questions I’m looking to answer when I write music,” she said. “I wouldn’t say that my music is religious in any sense, but there’s such a distinct method of thinking within the Jewish community that I think is probably the product of generations of Talmud study, and I often find myself hearing it most when I’m writing. What’s the truth? What’s the point? Why are we here? How can I connect?”

For more information on the band and to watch the video for “Out of It Alive,” visit facebook.com/hellovictimofficial. To find out about the next virtual Park Sound Studio concert, visit parksoundstudio.com.