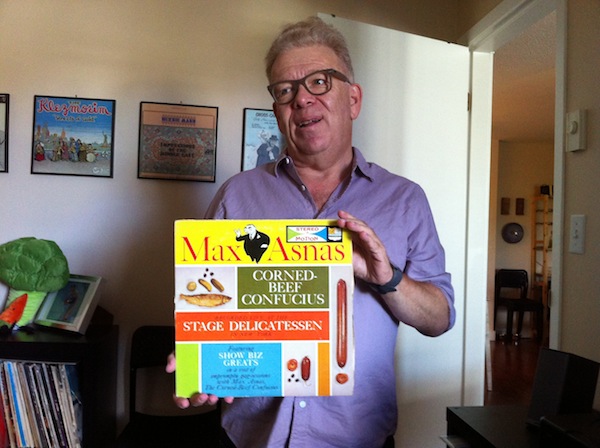 Andy Muchin with a record from his collection. (photo from Sounds Jewish)

The American South may not be the first place you would consider tuning the dial for an hour-long radio program that runs the gamut of Jewish music and many other audio facets of Yiddishkeit. That the show is assembled half the year on Vancouver Island might add another element of unexpectedness to the equation.

“I realize it might appear a bit incongruous,” Andrew Muchin told the Independent, from his Victoria home. “But, thanks to the internet age, things like this are no longer that difficult to do.”

Fifty weeks a year, Muchin goes through his collection of more than 1,000 vinyl records, scores of CDs and hour upon hour of digitized music to produce Sounds Jewish, a weekly radio program for Mississippi Public Broadcasting, based in Jackson, Miss. The show is broadcast on Sunday afternoons there and heard anytime online.

Having celebrated its ninth anniversary at the end of last September, Sounds Jewish focuses on a relevant theme, often within the Jewish and secular calendars. Avid listeners soon realize the problem for Muchin is not finding material but sifting through all the material that is out there. It takes several hours to select music for, record and produce each show, and programs often contain a range of offerings, anything from a 1960s comedy routine to Israeli hip-hop.

For American Thanksgiving in late November, Muchin spun a number of discs, including a Ladino number, “These Beautiful Tables” by the Ruth Yaakov Ensemble, and “Tish Niggun” (“Table Melody”) from the band Klezmer Plus! The show then mixed in songs of gratitude, such as a melodic rendition of Psalm 118 with Israeli singer/keyboardist Idan Raichel and Malian singer/guitarist Vieux Farka Touré and a counting of blessings from British singer Daniel Cainer – who opened the 2019 Chutzpah! Festival – in “How We’re Blessed,” from his album Jewish Chronicles.

In October, Muchin prepared a World Series show dedicated to Jews and baseball, and particularly to the home cities of the two teams involved in this year’s Fall Classic, the Houston Astros and the Washington Nationals. This show featured a country version of the prayer Modeh Ani from Houston-born country singer-songwriter Joe Buchanan; a cut from Kramer’s The Greenberg Variations, an instrumental tribute to Detroit slugger Hank Greenberg; and ballpark favourites “Take Me Out to the Ballgame” and “God Bless America” belted out in Yiddish by Mandy Patinkin.

In marking recent holidays and occasions, Muchin has taken his listeners on a musical tour of Jewish labour songs ahead of Labour Day, rhythmically reminded them of many sins to avoid during the month of Elul, leading up to the High Holidays, and melodically explored the ongoing desire for self-improvement ahead of Yom Kippur, the Day of Atonement.

“I try never to be preachy, but I like to inform my listeners of various Jewish or Jewy practices they can incorporate in their lives – or not. Mostly, though, Sounds Jewish presents the diversity of Jewish music across time and space. To my ear, Jewish music is the ultimate world music, since Jews have lived almost everywhere on earth, blending the native music with Jewish themes,” he said.

A native of Manitowoc, Wis., Muchin was raised in a traditional Jewish home, growing up versed in Hebrew and liturgical melodies. He later learned Israeli songs at a Zionist summer camp, but said he didn’t become steeped in Jewish music until long after the klezmer revival of the 1970s.

Muchin has been active in Jewish media and Jewish life since 1986, when he started as an assistant editor for the Jewish Telegraphic Agency. He moved back to his home state to serve as editor for the Wisconsin Jewish Chronicle in Milwaukee and edited and co-published (with Marge Eiseman) Jewish Heartland magazine. He also has written for the Forward, Moment, Jewish Week and numerous other publications.

In 2009, Muchin landed in Jackson, as the cultural program director of the Goldring/Woldenberg Institute of Southern Jewish Life, a nonprofit that provides a variety of educational, cultural and religious services to underserved Jewish communities throughout the South. There, he met the director of Mississippi Public Broadcasting’s radio division, Jason Klein, who also happened to be Jewish, and Sounds Jewish took flight.

In Victoria, Muchin served as director of the 2019 Victoria International Jewish Film Festival and has written and presented two Purim shpiels (plays).

As for the future of Sounds Jewish, Muchin hopes to continue adding to his Jewish music collection – he said he accepts donations of LPs – and to broaden and deepen the content of the show.

“I expect the show to have an increasingly Canadian feel as I learn more about the very creative Canadian Jewish music scene and its history,” he said.