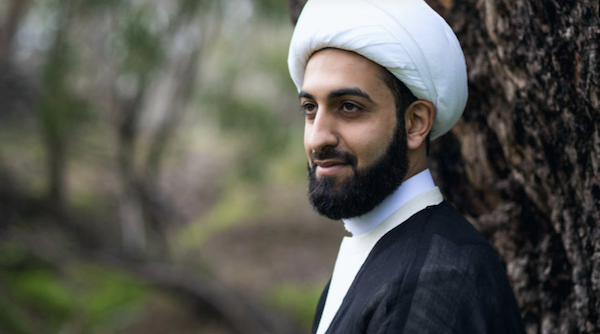 Imam Mohammed Tawhidi once preached hatred, but now is known as “the Imam of Peace.” (photo from imamtawhidi.com)

Imam Mohammad Tawhidi once preached hate towards Jews from the pulpit, and believed the very worst stereotypes about the Jewish people. He was indoctrinated by the Ayatollah’s preachers in Iran. But, today, Tawhidi is known as “the Imam of Peace” for a reason. He’s preaching coexistence and common ground for Jews and Muslims.

In late May, Tawhidi spoke at a United Grassroots Movement event at Beth Emeth Bais Yehuda, a Toronto synagogue, on how people of all backgrounds can – and should – unite against antisemitism and extremism.

An Iranian Muslim of Iraqi origin, Tawhidi sees his former peers actively engaging in hate-filled rhetoric. For example, as in years past, the politics of division and derision were widespread at the Al Quds march in Toronto earlier this year – chants included slurs against Israel and Jews.

Government officials are either incapable of preventing hatred on city streets and property, or unwilling to do so, he said. To answer problems such as these, he encouraged talk attendees to find, and bring together, as many allies as possible, to speak out and even take legal action wherever warranted.

Tawhidi’s change from preaching hatred, to becoming a friend of Israel and the Jews, did not come overnight.

First, he spoke out against ISIS war crimes in the Middle East and Africa. When he was met with condemnation from his peers, he said it opened his eyes to the radical elements that existed within his circle.

“I was still a fundamentalist, an extremist and antisemite,” he said of his views until then. “I thought I was doing this on behalf of God.”

And yet, he began thinking of how he could reconcile the slaughter of innocents in the name of Islam.

The next significant moment for the imam was when he met a Jew. Needing roadside assistance one day in England, it was a visibly Jewish man who helped him.

Later, Tawhidi was invited to a synagogue for an interfaith dialogue. Although he was skeptical, initially, of the people he was communicating with, he left the event feeling a special connection.

His decision to criticize ISIS and radical Islam and preach for peace with Israel and Jewish people was met with a severe backlash.

If he could turn a corner, so can others, Tawhidi maintained. But if they can’t do quite that, then it’s important, he said, to at least defend the truth in public, so that the people who are on the fence or ignorant of the issues can be exposed to all sides.

It’s hopeful for us to note, he said, that the kinds of beliefs he once held are no longer normative in many parts of the Arab world. He highlighted the signatories to the Abraham Accords with Israel, which is breathing new life into modern coexistence, he said.

Further proof of the power of allies, said Tawhidi, is that he received nearly three-quarters of the vote in favour of him winning the position of vice-president of the Global Imams Council, a transnational nongovernmental body of Muslim religious leaders.

Tawhidi stresses that Islam is not a religion that hates Jews, and anything to the contrary is a perversion of the Quran.

To defend against antisemitism, he insisted that Jews and non-Jews must call it out, take legal action when merited, and bring together many communities: “Do not underestimate the power of your allies!” he said.

A staunch supporter of Israel and what he sees as Israel’s right to Judea and Samaria (the West Bank), Tawhidi said, in response to a question from the Jewish Independent, “There can be no circumstances where the Israeli government should give away any land that belongs to the Jewish people. The holy Quran has made it very clear that God, the God of Abraham, wants Jews to live in that region and for Jerusalem to be their capital. That is the teaching of my Quran, and it is clearly stated in Chapter 5, verse 20 onwards.”

As for developing allies out of those who do not support Israel, yet will speak out against antisemitism, Tawhidi said, “You can’t hate a people and you can’t hate a whole country, but I guess they have issues with certain policies of that government, so they need to provide productive and constructive criticism, so that the problems can be solved, and that solutions can be placed forward.”

However, he continued, “a blanket hate on a nation or a people does not come from a person that is worth making a friend, I don’t believe.”

Jon Wasserlauf is a freelance writer, and a political science major and law student based in Montreal.