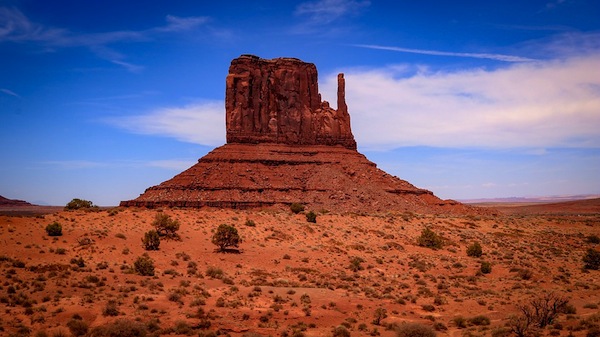 Having always lived in and around rainforest, CBC Vancouver’s Matthew Lazin-Ryder said the desert is a place he still struggles to fully understand.

“The desert has always seemed to be an imaginary place,” said Lazin-Ryder, contributing producer of the radio-documentary What Happens in the Desert. “My only contact with the desert has been in movies, storybooks, religious metaphors and things like that. The closest I have ever gotten to the real desert is having spent a little time in New Mexico, but, even then, I don’t think I was in true, scientific desert. My impression of what the desert was in my imagination was different than reality.

“One thing I wasn’t prepared for in my time in New Mexico was how cold it got at night, because it can get really cold. The imaginary desert in my mind was always hot – nights are sweltering, empty spaces, desolation.”

In the radio documentary, which is an episode of the CBC Radio show Ideas, Lazin-Ryder explores various perceptions of the desert, stemming from culture, such as movies, novels and poetry, which often only portray one aspect of the landscape.

“An example we use in the documentary is Monument Valley in Utah, which, if you’ve seen a western film, it’s in so many movies,” Lazin-Ryder, who is a member of the Jewish community, told the Independent. “So, Monument Valley is that part of Utah, with red sand and rock, with these big towers of rock jutting out of the middle of the desert. John Ford, legendary western director, shot over 10 movies there at Monument Valley and lots of other classic western movies have used the backdrop of this valley as the setting.”

However, while it may seem that many films are shot in Monument Valley, most are actually shot in less-known locations in states like Texas, California and Arizona.

“It’s never specifically that this movie or story is taking place in Monument Valley,” said Lazin-Ryder. “It just becomes a symbol of the desert, which is a stand-in for an alien place, an exotic place, a place that you’ve never been to.”

From a religious perspective, the experts Lazin-Ryder interviews often speak of duality, where the desert is both a place where God is absent and where God is felt the strongest.

“The desert, in the Old Testament, is a place of deep spirituality and is also, for the Israelites, the place where they encounter God, where God travels with them,” he explained. “In the Christian New Testament and Christian culture later on, the desert becomes a place, not of exile and separation from God, but a place you go to escape civilization and to connect with God. Simultaneously, it’s a place where there are dangers … and the devil lives there and there are poisonous creatures, and it’s a place of death, wasteland and absence of God. But, at the same time, the desert is the place, both for the Israelites and early Christians, a place to go to connect with God.

In the documentary, Lazin-Ryder talks about the way the desert is portrayed in science-related and apocalyptic movies – movies that portray the future world as a desert; that climate change, if it continues apace, will leave the whole earth a desert.

“The seas will dry up, the forests will die and everything will be desert waste … which is not particularly an ecologically valid prediction … but, it’s a helpful metaphor for people to think about the dangers of climate change,” he said.

“The other thing is that, when talking about climate change and things like switching to less carbon-intensive energy, the desert becomes a very easy thing for people to say … ‘Hey! You know what would be great? Let’s just put a whole bunch of solar panels and windmills and stuff in the desert, because that’s empty land and it gets a lot of sun.’ You can Google it – there are all kinds of plans that people have pushed, to put acres and acres of solar panels in the Mojave Desert, the Sonoran Desert or the Sahara Desert.

“It’s this kind of a science-fiction idea that, hey, we have these empty spaces on the earth – let’s absolutely fill them with solar panels and windmills. But, the problem with that is – it comes from this thinking about deserts as though they are empty, ownerless places, absent of life. And, the problem is that that’s not true. Deserts are full of life, of plants and of animals that have adapted in interesting ways. And, we also don’t quite understand the place that deserts have in the broader ecosystem, in terms of the carbon cycle.”

Desert systems are intricate and delicate and we, as humans, often only notice a change when it is already too late. Lazin-Ryder gave the example of the Joshua trees in the Mojave Desert that are dying, and the efforts to preserve them.

“Those kinds of problems are expected to increase as climate change goes on,” he said. But, talking about the desert as merely land available to fix the problems that we have created, “neglects the fact that they are not absent, marginal places. They actually have a place in the world. Deserts are a natural thing that should exist on the earth,” he said. “And there will be increasing pressures to put things in the desert, to put people in the desert, to grow food in the desert – despite the fact that they are as important and as under threat as places like the rainforests and wetlands that we’re trying to preserve. So, on one hand, we’re afraid the future might become desert, but, on the other hand, we may want to think about how to preserve the deserts we already have, as there are many threats to the desert.”

Lazin-Ryder hopes listeners of the documentary will gain a better grasp of the nuances of the desert. For most people in the West, he said, “interaction with the desert is in an imaginary sense … either in religious texts, fiction or movies.” The show tries to get people to consider “what those metaphors and symbols do to our thinking – not just about the desert, but of all the natural world; in what places are worth preserving, celebrating, and what places we think of as marginal, empty, dead or inherently bad.

“We get lots of stories told to us all the time, about what parts of the earth are good or bad,” he said. “I think, ultimately, beyond whether we’re talking about deserts, dry land or wet land, my ultimate hope is that it helps people think about the stories that we tell ourselves about the natural world, versus trying to gain an understanding about how the natural world actually works.”

To listen to What Happens in the Desert, visit cbc.ca/radio/podcasts/documentaries/the-best-of-ideas.