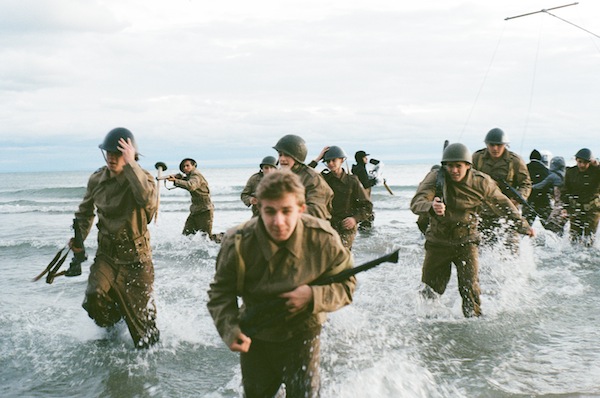 The fear, bloodshed and massive loss of life in the cause of freedom are illustrated through remarkable – and convincing – dramatic reenactments in D-Day in 14 Stories. (photo from YAP Films and the History Channel)

The horrors and heroism of D-Day took place 75 years ago June 6. A remarkable new documentary, with distinct Canadian and Jewish connections, will air on the History Channel June 1. D-Day in 14 Stories includes firsthand recollections from Allied and German soldiers and French civilians – many of them kids or teenagers at the time of the conflict.

The massive battle of the Second World War saw more than 150,000 Canadian, American, British and other Allied soldiers storm the beaches of France, marking the turning point of Nazi – and Allied – fortunes.

D-Day in 14 Stories is a social history of D-Day, a joint production of YAP Films and the History Channel. The events on that long-ago day in 1944 are illuminated by eyewitness accounts from some of the few remaining veterans of that historic battle.

On D-Day alone, 359 Canadian soldiers were killed. More than 5,000 Canadian soldiers died during the succeeding weeks of fighting in Normandy. The fear, bloodshed and massive loss of life in the cause of freedom are illustrated through remarkable – and convincing – dramatic reenactments, visual effects and historical footage, including a trove of colour film taken by a soldier using an early Bell and Howell handheld movie camera.

Many soldiers on both sides were just following orders but, as Morton Waitzman recounts in the documentary, some Jewish soldiers felt a particular motivation.

“Being of the Jewish faith myself, and so many of my comrades, we knew we had to get over there as soon as possible to do whatever we could to stop this terrible curse,” he said. As a communications specialist, he connected American and British forces with members of the French Underground to help coordinate the battle.

The Germans were anticipating an attack, but had no idea when, where or how large a force the Allies would assemble. The documentary follows a wall of soldiers parachuting through a cascade of tracers. In all, 13,000 Americans dropped inland by air to support the amphibious landing and undermine the German response.

While one Allied soldier says, “Anybody who says they weren’t afraid is not telling the truth,” a German soldier recounts, tellingly: “We had no fear. We were convinced that we would win.”

Until D-Day, the British Air Force had strafed the Normandy coast, but returned to their island redoubt. French residents of the area were familiar with the routine: take shelter when the alarms go off and come back out when they ring again.

Bernard Marie was a 5-year-old child in Normandy at the time.

“The big difference is that, on June 6th, the siren never came back,” he said.

In all, 7,000 vessels embarked from Britain to the French coast. The Allies had no illusions about the cost of the operation. Casualties were anticipated to reach 25 to 30%.

Emotionally powerful dramatizations follow 16- and 17-year-olds as they face the life-and-death moment for themselves and the free world.

“Some never got off the boat,” recalled one soldier. “They were shot, bodies laid all over, boats turned upside down, real chaos. We still kept going forward.… Soldiers.”

One survivor remembers that, despite the explosions all around him, his sole consideration when coming ashore at Normandy was that his socks were soaked through.

The average soldier was carrying 35 kilograms on his back and, for those whose vessels did not manage to make it close to shore, jumping off the ship, in many cases, led to almost instantaneous drowning.

If they survived the initial landing, the soldiers had to confront the German enemy firing down from above at Allied soldiers who were effectively sitting ducks. A German soldier recalls: “We merely had to point that machine gun and it was like cutting wheat with a scythe. For the odd miss, we had a thousand hits.”

The film admirably makes the effort to capture the particular experiences of African-American and First Nations soldiers.

Waitzman, the Jewish American soldier, went on to fight in Europe and participated in the liberation of concentration camps.

“We became eyewitnesses to the Holocaust by what we saw,” he says in the film. “We were very compelled to tell the details to young people. We had to talk, to fight this as much as possible.”

Another veteran of the battle reflects on the loss of life, but ponders the alternative: “God knows what would’ve happened if we hadn’t done it.”