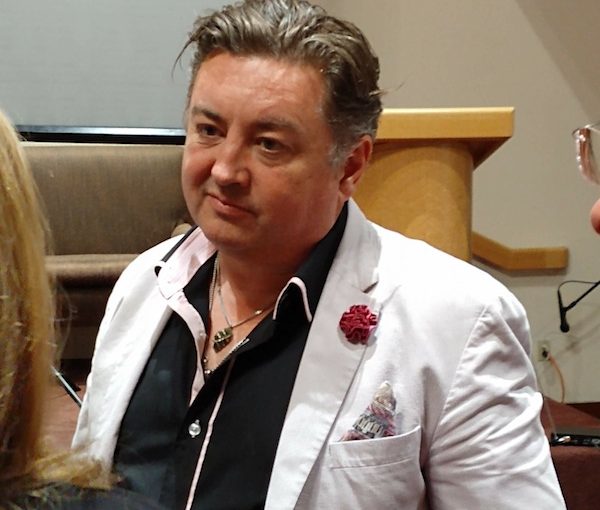 A former leader in Canada’s far-right white nationalist movements says targets of white supremacist extremism should not be expected to “hug a Nazi.” But, as difficult as it may be, seeing the humanity in everyone and finding compassion for people who lack compassion may be key to reducing the problem of racist extremism.

Tony McAleer was a member of the so-called White Aryan Resistance and his early embrace of technology and the internet helped propel that movement into the digital age. He later helped found the organization Life After Hate and now works with others who want to leave the neo-Nazi movement. He shared his personal history at Beth Tikvah synagogue, in Richmond, on Sept. 8. He has also spoken at other synagogues and venues in recent weeks.

McAleer grew up in a stable, comfortable Dunbar home, which contradicts some stereotypes, he said. He attended private Catholic school but lost respect for authority figures when he caught his father with a woman who was not McAleer’s mother.

“Can anyone remember the day when God fell off the pedestal?” he asked. His grades fell, his behaviour deteriorated and he was regularly sent to the principal’s office for canings.

Ideology is secondary, at best, as an attractant to racist groups, he said.

“What we find in the young men and women who are drawn to these movements is there’s an underlying rage, underlying vulnerability that makes the ideology so seductive,” he said. “I want to be very clear here. I’m not for a minute blaming anything I did on my childhood. Everything I did I chose to do and I take accountability for that and I always will. I work for Life After Hate, do things like this to pay back for that.”

He shares the story of his early life as an explanation, not as a justification, he said.

“What I found in the movement, what I found from being a skinhead – I found a sense of power, a sense of purpose, a sense of meaning,” McAleer said. “I got power when I felt powerless. I got attention when I felt invisible and I got brotherhood, camaraderie and acceptance when I felt unlovable.… Those are the vulnerabilities that make the ideologies so seductive. If you have those in a healthy way, the ideology doesn’t make sense to you. But, for somebody craving those things, the ideology becomes something powerful, a false seduction.”

When he was 21 years old, McAleer’s girlfriend gave birth to a baby girl.

That began the transformation. He had a son months later and was soon a single father being assisted by his mother who, he said, “never gave up on me.”

Though he was heavily involved in antisemitism, it wasn’t about Jews, he said.

“I was projecting my crap and I had a vehicle to project it onto – the Jewish people – and that’s what I did.”

The compassion Life After Hate promotes must be accompanied by healthy boundaries and consequences, he said.

“It doesn’t mean we let people off the hook. It doesn’t mean we don’t hold people accountable,” he said. “We do hold them accountable. It’s like tough love. But we need to see the humanity, even in someone whose heart is filled with hate. I don’t think we can afford to dehumanize anybody regardless of how inhuman their behaviour. I believe that nobody is irredeemable. It’s tough work.”

Brad Galloway, who is also a member of Life After Hate, joined McAleer at the event. Also a former white supremacist, Galloway is now completing a degree in the school of criminology and criminal justice at the University of the Fraser Valley. He researches extremism and participates in interventions with members of hate groups to help them leave the movements.

Galloway too came from a middle- to upper-class home. After a fairly typical adolescence and a period of struggling to find his identity, he ran into a childhood friend who was involved in the white power movement.

“I was looking for an identity,” said Galloway. “I was looking for something to belong to, something that I can call my own. He gave me the chance. We’ll give you brotherhood, we’ll back you up, we’ll be there for you … some sort of pseudo-support network which never, never came to fruition. They never provided any of those things for me.”

Like McAleer, it was fatherhood that made Galloway realize his extremism was putting his family at risk.

He also reflects on compassion he received from police and others during his time in the far-right.

“Why do these people care about me?” he wondered, adding that he began to recognize that individuals who were kindest to him were often members of the very cultural groups he demonized. After a gang brawl where Galloway was nearly killed, he saw compassion in action.

“I ended up in a hospital and I’m lying on the table and a doctor walks in and he’s an Orthodox Jew. I’m lying there with a swastika shirt on, blood all over me, thinking this guy should not help me. I do not deserve to be helped at all right now…. I felt like I was a terrible person and I didn’t feel I deserved this person’s time,” said Galloway. “He did not mention anything about me. He just did his job as a doctor and provided me exactly what I needed. That moment made me start to think about all these different times when minority communities had been good to me.”

Since the racist rally in Charlottesville, Va., in 2017, Life After Hate has been inundated with requests for help. About 300 new cases have opened, about half of which are people trying to leave the movement, the other half family seeking help to extricate their loved ones.

McAleer’s book, The Cure for Hate: A Former White Supremacist’s Journey from Violent Extremism to Radical Compassion has just been released by Arsenal Pulp Press.