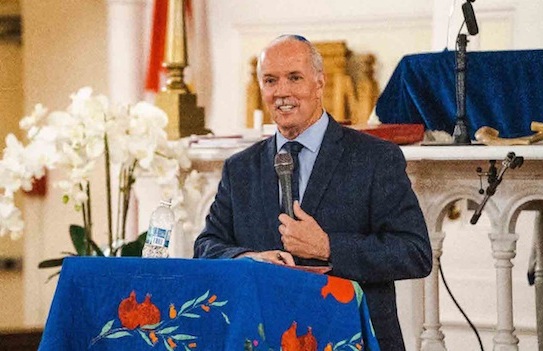 B.C. Premier John Horgan speaks at Congregation Emanu-El Synagogue in Victoria on the evening of Wednesday, Oct. 19. (photo from Jewish Federation of Victoria and Vancouver Island)

The Jewish Federation of Victoria and Vancouver Island and its partners, the Jewish Federation of Greater Vancouver and the Centre for Israel and Jewish Affairs, held a farewell reception to honour B.C. Premier John Horgan for his service. They shared their gratitude for the support, partnership and friendship of Horgan and his government. They commended the premier’s friendship with the Jewish community, and his resolve to fight racism and antisemitism, and to preserve the teachings of the Holocaust.