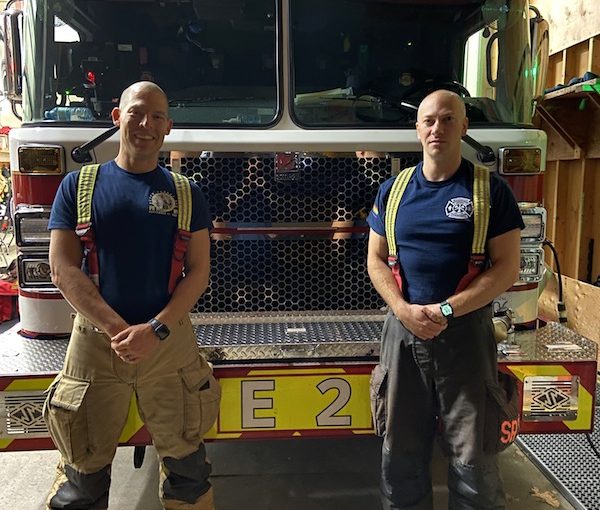 There are not many Jewish firefighters in Vancouver – but two of them serve together in Fire Hall #2 in the Downtown Eastside.

Being Jewish is not all Daniel Greenberg and Adam Bender have in common. They are also both Ontario-born men, about 40, who came to firefighting comparatively late in life after other careers. And both have young families who they get to spend quality time with because the shift work inherent in their profession offers a flexibility that the 9-to-5 grind does not.

The two met while stationed together in the Downtown Eastside, a posting unlike any other in the city. The vast majority of calls to which they respond are drug overdoses and related emergencies. The leading minds of politics, policing and healthcare have not been able to resolve the epidemic of addiction that grips the neighbourhood and, if firefighters had the solution, it would have been implemented by now, but they don’t.

“This issue is often discussed amongst the firefighters,” said Greenberg. “We obviously don’t know the solution. It’s a terrible situation. It is difficult to see. You are seeing human beings living in a state that, honestly, you don’t expect human beings to live in…. Safer places for them to go, more permanent housing situations, access to treatment programs – any and all of the above sound wonderful and ideal.”

Vancouver Fire and Rescue recognizes the toll that serving in this challenging hall can take and they have a limit of 80 shifts – or about a year – before being transferred to a more conventional hall.

When he started, Greenberg got some advice from a veteran firefighter.

“Don’t make their emergency your emergency,” he was told. This may be easier said than done, of course, and Greenberg said the fire department takes the risks seriously. During recruitment, trainees go through resiliency training to prepare them in advance for what they might encounter, and the department is sensitive to the impacts tough calls can have.

“If we witness a particularly troubling call, you are essentially taken out of service and you are provided with counseling,” said Greenberg.

This is a major advancement from the old-style approach, which Greenberg characterized as “Tough it up, shake it off, on to the next.”

“We are all made to feel really supported,” he said of the current atmosphere.

Greenberg became a firefighter in Ontario after working in construction and teaching physical education and kids with special needs. He moved west when his wife, Emily Greenberg, was hired as head of school at Vancouver Talmud Torah. They have three kids, ages 12, 10 and 6.

“I was really searching for a career path that I’d be very passionate about, that would suit my strengths and my interests. Frankly, also, a job that could support my family and my wife not only financially but also me being able to be around the family a lot more than a simple 9-to-5,” he said.

Jewish people may be overrepresented in many helping professions, but not this one. Greenberg isn’t sure why.

“I think, historically, whether I’m generalizing or not, most Jews are steered towards professions that are more of the white-collar variety: lawyers, doctors, builders, entrepreneurs,” he said. “Certainly anything that involves a level of danger, perhaps, doesn’t speak to Jewish people. Mothers are probably a key ingredient there.”

Coming to firefighting after wider experiences, Greenberg has no regrets.

“It’s really exceeded my expectations,” he said. “Every firefighter I speak to truly loves the job.”

He sees his work as an embodiment of the value of tikkun olam.

“I’m fortunate to have a job and a career where I may not be helping the world at large per se, but to an individual in that moment, in their most dire moment, it feels pretty good to be there with my crew helping them and potentially saving lives,” he said.

Greenberg also picks up some shifts as a supply teacher and he is starting a new side business involving cosmetic tattooing for hair loss. He noted that he may be the only Jewish vegan firefighter in North America.

Greenberg met Adam Bender at the hall. It was a total coincidence that two practising Jews – maybe the only ones on the job – would end up in the same station.

Bender was born in Oakville, Ont., but spent formative years in Israel. His parents moved there when he was a year old and they returned to Canada around the time of the first Gulf War, when Bender was in Grade 1.

In Hamilton, Ont., at this point, Bender admitted he was not a model student.

“To say that I was kind of a piece of crap would be an understatement,” he said. He was kicked out of school and, to avoid being kicked out of his house, he made a deal to go on a five-month ulpan on a kibbutz in Israel.

But Bender’s parents got more than they bargained for when he returned home from ulpan with a surprise.

“I did something my parents I don’t think thought was part of the deal when I signed up for ulpan,” he said. “I signed up with the Israeli army. I broke the news to them when I came home that I was going back in a month.”

He served two years (since he was joining at age 21, rather than 18, he was not required to commit to the usual three years) and made it into the paratroopers and special forces.

“Special forces unit [was] probably the biggest influence on my character in terms of understanding the ability to accomplish goals,” said Bender. He returned to Canada, intending to study at the University of Toronto but, again, school wasn’t a good fit and he joined the Canadian military. There, he also served in the special forces.

He met his now-wife and proposed shortly before a six-month deployment in Iraq. The understanding was more intuitive than explicit that, for the marriage to work, a career other than the military was required.

Like Greenberg, Bender isn’t sure why more Jews don’t choose their path, but suggests “the Jewish grandmother card” may play a role. “There’s a lot of other professions that are a lot more attractive, let’s say, and safer. Firefighting is a blue-collar job at the end of the day.”

The Greenberg and Bender families hope to get together for Shabbat dinner one of these weeks, but the pandemic has thwarted that hope so far. Meanwhile, Bender said, it’s a happy coincidence that the two tribe members ended up together.

“There obviously wasn’t any strategic implementation of putting the two Jewish kids together on one crew,” said Bender. “We’re kind of lucky that that happened.”