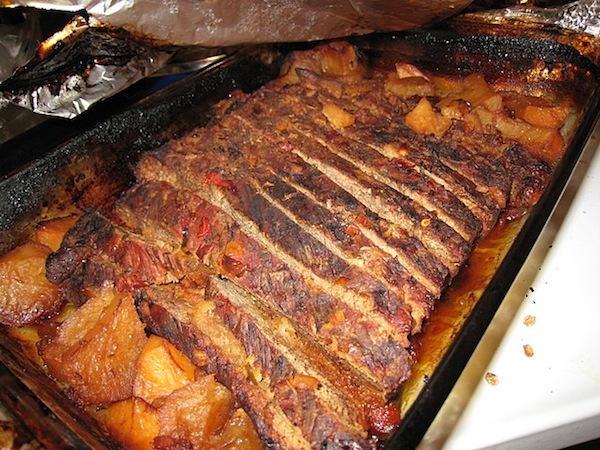 In traditional Jewish cooking, brisket is most often braised as a pot roast, especially as a holiday main course, usually served at Rosh Hashanah, Passover and on the Sabbath. For reasons of economics and kashrut, it was historically one of the more popular cuts of beef among Ashkenazi Jews. Brisket is also the most popular cut for corned beef, which can be further spiced and smoked to make pastrami. But why not try it for Chanukah? It’d make a great holiday main dish.

First, some background. Brisket is a cut of meat from the breast or lower chest of a cow. It is one of the nine primal cuts of beef, though the precise definition of the cut differs internationally. The brisket muscles include the superficial and deep pectorals. As cattle do not have collarbones, these muscles support about 60% of the body weight of standing or moving cattle. This requires a significant amount of connective tissue, so the resulting meat must be cooked correctly to tenderize the connective tissue. The term brisket is derived from the Middle English brusket, which comes from the earlier Old Norse brjósk, meaning cartilage.