Steven Rothfeld is a travel photographer with an emphasis on culinary cuisine. He has written more than 10 books of photography and lives in Napa Valley, Calif. His cookbook Israel Eats (Gibbs Smith Publishers) came out earlier this year.

In the introduction, Rothfeld describes how he met an Israeli on a train in Italy in 1984. The fellow passenger asked Rothfeld why he hadn’t been to Israel. Twenty-five years later, reading Amos Oz’s memoir, Rothfeld’s imagination started working. In 2010, he finally made the trip.

“I encountered a world I had never imagined existed in Israel,” he writes, referring in large part to the vibrant cuisine.

He had worked on three books previously with chef Nancy Silverton so, when he conceived of Israel Eats, he asked her to join him.

Silverton is a chef, baker and author of eight cookbooks. She won the James Beard Foundation’s outstanding chef award of 2014 and lives in Los Angeles. She had been intrigued by Yotam Ottolenghi and Sami Tamimi’s cookbook Jerusalem and, in Israel, she discovered that “the cuisine of Israel is an extraordinary layering of flavors.” 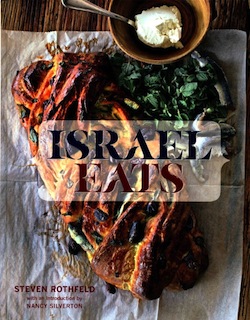 After Haaretz journalist Ronit Vered explains the history of Israel’s cuisine from the 1950s to today, Rothfeld and Silverton embark on a tour of Israel – Tel Aviv-Jaffa, the north, the centre, the south, Jerusalem and the Judean hills, concluding with the “ecosystem of Israel Eats,” meaning the people who contributed to the book.

Each “chapter” has an introduction, with accounts of places Rothfeld and Silverton visited and people they met, and is followed by the recipes, each with its own introduction, source and beautiful color photographs.

Some of the recipes are from restaurants and chefs, others are from individuals and some are by Silverton. This is not a kosher cookbook but only five recipes are strictly non-kosher and most of those could be adapted by leaving out one ingredient that would not change the tone of the recipe; only one recipe is not adaptable. There are 90 recipes in total, and here are a couple.

HALLOUMI CHEESE FLOWER
(two servings: “A single flower will only make you crave a bouquet.”)

Heat oil in a heavy eight-inch skillet over medium heat. Arrange tomato slices in the skillet in the shape of a circle. Top the tomato slices with cheese slices. Sprinkle with salt and pepper. Arrange the garlic and chili slices atop the cheese. Bunch the cilantro sprigs in the centre of the skillet. Continue cooking until cheese is soft but not totally melted. Serve immediately.

Combine the tomatoes, sugar, water and peppercorns in a medium-size heavy pot and bring to a boil. Reduce heat and simmer, stirring occasionally until the mixture is thick and syrupy and reduced by half, about one hour.

Sybil Kaplan is a journalist, foreign correspondent, lecturer, food writer and book reviewer who lives in Jerusalem. She also does the restaurant features for janglo.net and leads walks in English in Jerusalem’s market.