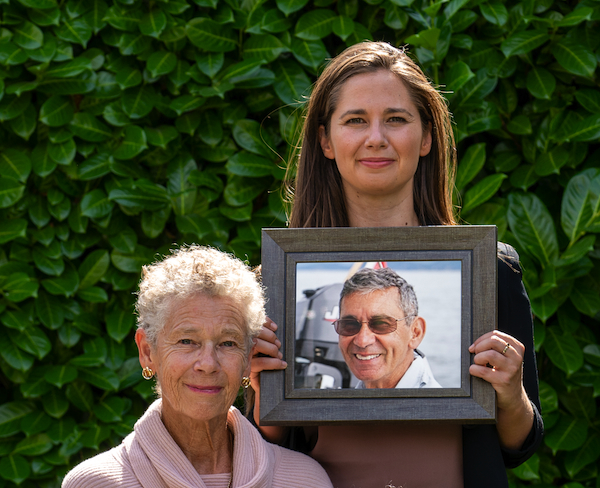 Jane Remocker and her daughter, Catriona, holding a photo of Geoff Remocker, who passed away in 2016 from pancreatic cancer. (photo from BRCAinBC Committee)

Education is a key goal of the upcoming One in 40: From Awareness to Empowerment event being held at Congregation Beth Israel on Jan. 8.

“BRCA 1 and 2 is the code for variant mutations of two genes known to increase the lifetime risk of several serious cancers, including breast and ovarian cancers and other cancers linked to reproduction in women and prostate cancers in men, as well as pancreatic cancers and melanoma in all genders,” explains the BRCAinBC Committee’s project primer. One in 40 is the probability of carrying the genes among Ashkenazi Jews – compared to a risk of 1/500 to 1/1000 in the general population.

The BRCAinBC Committee, organizer of the One in 40 event, describes itself as “a group of concerned members of the Jewish community in British Columbia, many of whom have been affected personally or in our families by the BRCA 1 or BRCA 2 genes and genetically linked cancers.”

The committee’s work is supported by Beth Israel, which is its home, as well as many other community members, organizations and institutions, including the B.C. Cancer Agency, the Centre for Israel and Jewish Affairs, the Jewish Federation of Greater Vancouver and the Diamond Family Philanthropic Fund.

“There are currently no efforts being made in British Columbia to create awareness or cover general genetic testing for people of Ashkenazi Jewish heritage – in the past, this was due to the prohibitive expense of testing,” notes the primer.

“There have been significant recent gains in the medical community around improving the affordability of testing for genetic mutations,” it continues, “however, awareness of risk is still low amongst members of the Jewish community and, currently, holding a risk profile of being of Ashkenazi Jewish descent is not sufficient to be covered for genetic testing under B.C.’s Medical Services Plan (MSP).”

The impetus for the committee and the One in 40 event was the death of Geoff Remocker of aggressive prostate cancer in 2016. After he died, his wife, Jane Remocker, and the family met with Beth Israel’s Rabbi Jonathan Infeld. She explained to the Jewish Independent in a phone interview that, as members of the congregation, there were donations being made to the synagogue in her husband’s honour, and the rabbi wanted to know where the family wanted to direct the funds. The couple’s youngest daughter, Catriona, who works in the healthcare field, suggested they do something with respect to BRCA genes. Since they weren’t quite sure what they wanted to do on the topic, the donations were held in a discretionary fund until Jane Remocker scheduled a meeting with the rabbi and her daughter two years later, in June 2018.

“By then, she and I had ideas and came up with our three basic goals,” Jane Remocker told the Independent. The three short-term goals of the committee were education and awareness within the Jewish community, and easier access to information about the BRCA genes; advocacy, which involves providing information about and access to screening options, both private and public; and fundraising to cover what has become the One in 40 community-wide education event and the BRCAinBC.ca website, which will be launched in January.

Since Geoff Remocker didn’t meet the criteria for B.C. Cancer Agency’s Hereditary Cancer Program, which offers genetic counseling and testing for “residents who may have inherited an increased risk for specific types of cancer,” he signed up for a B.C. Cancer study of drugs that treat prostate cancer, which included gene testing.

Remocker said he signed up for the study because, “as he said to me, ‘I don’t think the drugs will help me, I think it’s too late. But, if there’s a gene that’s driving this cancer to be aggressive and resistant to treatment needed, that knowledge will help other people.’” It was discovered that he was indeed a BRCA carrier.

Part of the issue, said Remocker about why her husband wasn’t eligible for the Hereditary Cancer Program, was that, while they knew some of her mother-in-law’s medical history, they knew nothing about her father-in-law’s side of the family, who came from Poland and Russia.

“And this is not uncommon,” she said. In addition to this generation not talking about health issues, in general, there wasn’t so much knowledge about health back then.

While a lack of family medical history can be one obstacle in getting genetic testing, she said, another is that many people don’t realize that men can be carriers of the BRCA mutant genes.

“They thought it was only a gene that affected women as breast cancer,” said Remocker. It is important, therefore, and a goal of the committee’s educational program, to make sure that Jewish men – especially if they have roots in Europe – know that they are possible carriers and, therefore, consider getting screening.

Confirmed panelists for the One in 40 event are Dr. Rona Cheifetz, medical lead of the Hereditary High Risk Clinic, B.C. Cancer Agency; and Dr. Intan Shrader, who, along with Dr. Sophie Sun, is co-medical director of the B.C. Cancer Hereditary Cancer Program. The panel will also feature medical oncologist Dr. Daniel Khalaf of the B.C. Cancer Agency and Jewish community member Tovah Carr, a BRCA carrier. There will be a chance for audience members to ask questions.

Keynote speaker Libby Znaimer of Zoom Media is national spokesperson for Pancreatic Cancer Canada; she is a cancer survivor and a BRCA gene carrier. Her personal fight against breast and pancreatic cancer is the subject of the 60-minute documentary Cancer Saved My Life, which discusses “the BRCA 1 and BRCA 2 gene mutations that predispose people to pancreatic cancer, and the connection between BRCA and breast and ovarian cancer,” as well as the “groundbreaking research going on in Canada and Israel, where there is a BRCA-rich population.”

The BRCAinBC.ca website will be “a one-stop place for people to go to get information about the genes and the mutations that indicate the cancer risk and where they can go for private screening if they don’t meet Hereditary Cancer’s criteria or they don’t want to wait,” said Remocker.

Hereditary Cancer has a long wait list, she said, so the website will have some options for private screening. “We’ve researched and found a number of accredited medical genetic labs that do specific inherited Jewish genes screening and we know that, [for] at least two of them, the results are accept[ed] by the Hereditary Cancer Program.”

Currently, the cost for private testing is about $250 US, said Remocker. This alternative means that, “instead of waiting six to 12 months to get your first interview with the Hereditary Cancer Program, you get a saliva test, you apply. They send the package to you, you send it back and you get your results anywhere from two to six weeks.”

A person can then take those results to their family doctor, she said, as a referral is needed for the HCP.

The website will also feature personal stories of those who have been affected by the BRCA 1 and BRCA 2 genes, as well as links to current research and resources.

Michelle Capobianco, the executive director of Pancreatic Cancer Canada, will be in attendance at One in 40, Catriona Remocker told the Independent. “[T]hey are considering working with us to roll out similar events to Jewish communities across Canada to improve awareness,” she said.

To register for the event, which runs 7-9 p.m., visit bethisraelvan.ca/ event/one-in-forty.