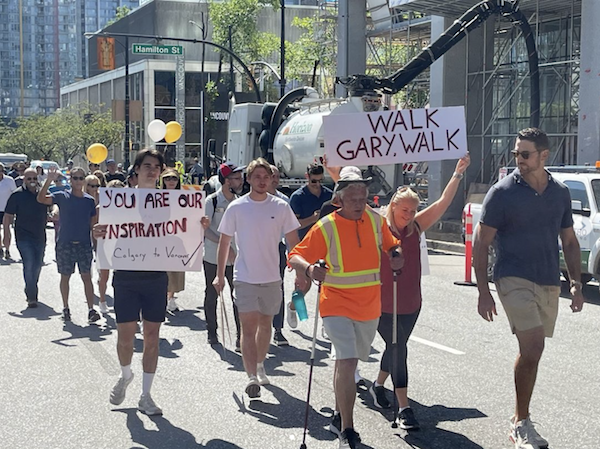 Supporters join Gary Averbach as he completes his walk from Calgary to Vancouver. (photo from Instagram @bobswalkforcancer)

When Gary Averbach told friends and family he was going to raise money for cancer research by walking from Calgary to Vancouver, they asked him if he was joking or crazy. His podiatrist urged his kids to get him to rethink his scheme. But when he strolled into Vancouver Aug. 11, he was greeted with a hero’s welcome at Jack Poole Plaza by those same people and plenty more who joined his cause.

The 79-year-old Averbach was inspired to raise at least $500,000 after he suffered the loss from cancer of four people close to him in a mere seven weeks last year. First, his cousin, business partner and friend Robert (Bob) Golden passed away. Averbach decided to do the fundraising walk in Bob’s honour. He connected with the B.C. Cancer Foundation and the planning for Bob’s Walk for Cancer was set in motion. Sadly, Averbach would soon find himself walking in memory and honour of three more people – cousins Ronnie Onkin and Darlene Spevakow, as well as his longtime and beloved housekeeper, Angelita Tica.

“At that point, I said, I can’t just do this walk for Bob,” Averbach told the Independent while taking a break from his walk in British Columbia’s Shuswap region last month. “I’ve got to include them as well because they are just as worthy of being included as Bob. Although it’s called Bob’s Walk, I made it clear that I’m walking for the four of them and everybody I’ve lost and anybody that has lost loved ones to cancer. There isn’t a family that that hasn’t happened to.”

The name of the campaign caused a little confusion on the road. As he trod along highways and byways, people yelled out encouragement to “Bob.” Averbach gave up correcting well-wishers.

“For awhile there, I was maybe correcting people but I thought, let me be Bob. It doesn’t matter, as long as they’re supporting me.”

What he didn’t get used to was the outpouring of support. All along the way, from the very first day of his trek, passersby sent shouts, honks, thumbs up and words of encouragement.

The cancer foundation helped Averbach set up a fundraising and information website, where people could follow his progress. He also blogged his journey, including interesting or thoughtful reflections on what had taken place that day or things that had popped into his head during his long, solo trek across the province.

Walking has always been a favourite pastime for the Vancouver businessman and philanthropist.

“I love sports and I wish I could be a good athlete but I was born with one eye weaker than the other,” he said. “Because I do not have good depth perception, I cannot be a good athlete. But one thing I always knew was that I had good stamina and I could walk for hours. I walked all through Israel when I was in my 20s and I’ve always enjoyed walking as a way to keep fit.”

Padding through some of North America’s most dramatic scenery was an experience, he said. Although he had been on the route many times, it was always at 100 kilometres an hour. The majesty of the Rockies, the rivers, streams, waterfalls and wildlife led him to change the theme song of his venture from “High Hopes” to “What a Wonderful World.”

“Watching closely like you do when you’re walking, it does make you realize not just how beautiful it is – you can’t do that when you’re driving – but also how amazing it is, how everything works together, like the water starts with a glacier and ends up being a river going out to the Pacific. Everything follows its path. And the flora, the way it changes here.”

He was in Banff National Park on Canada Day, but noticed that every day seems like Canada Day in some rural areas. The maple leaf flies frequently in small towns, he said.

“I think there’s a level of patriotism in the countryside that doesn’t exist in the big city,” he remarked.

He also noticed signs of the times. The pandemic and its associated labour shortages have led even the legendary 24/7 diner Denny’s to reduce its hours, and some of the motels his team stayed at along the way were short-staffed.

On foot, Averbach was also more aware than he might have been behind the wheel that the road system is not uniformly modern.

“It is so piecemeal,” he said. “There are some sections of the Trans-Canada that would not even be rated a good country road, especially going through some of the towns. It’s a disgrace in some cases.”

He had some trepidation about wildlife he might encounter – bears, obviously, were a worry – but infrastructure, more than luck, may have prevented any interactions with Smokey or Yogi. Wildlife-protecting fences have been installed along much of the country’s highway system, with overpasses for animals to safely get from one side to the other.

“I didn’t see a single bear,” Averbach said – not even from a distance. Mosquitoes, beetles and grasshoppers, on the other hand, were plentiful.

“If I was an entomologist, it would be fascinating,” he said.

Averbach was assisted by a team of two, Bart Zych and Alex Krasniak.

“Alex primarily drives the van behind me, he follows me like a puppy dog,” joked Averbach, noting that people undertaking adventures like this are required to have a vehicle adjacent for traffic safety. The usual schedule was to walk five hours, rest for a bit and then continue for another three or four hours.

“Bart is the person who does all the logistics. He arranges the hotels before we go from one place to the other. He even does my laundry much better than I do,” Averbach said. “He meets us and he brings us sandwiches.”

Averbach is a warm weather guy – he trained for the walk in Hawaii and Palm Springs – and didn’t appreciate the cold mountain weather in the early days of the walk. Even near the end, he encountered rain, despite it being the height of summer. On the other hand, he also traipsed through Canada’s desert zone.

“If I had my druthers, I’d rather be in hot temperatures than the really crappy weather we had in the mountains,” he said.

When he first spoke with the Independent, Averbach was worried about meeting his target of $500,000.

As of his arrival in Vancouver, he had surpassed his minimum goal of $500,000 and now has his sights on more.

“According to commitments and some of the cheques that are in the mail, we are probably somewhere around $570,000,” he said. The campaign will continue and the website will stay active until his 80th birthday, on Oct. 10.

He offers special thanks to friends in the Jewish community – donations in multiples of $18 are a sure sign of Jewish philanthropy.

While he is happy to be in his own bed and will continue pushing to raise more funds until his birthday, at least, he is not resting on his laurels or basking in the accolades.

He was touched, though, by the crowd of about 200 who greeted him as he completed his journey.

“It was very heartwarming,” he said.