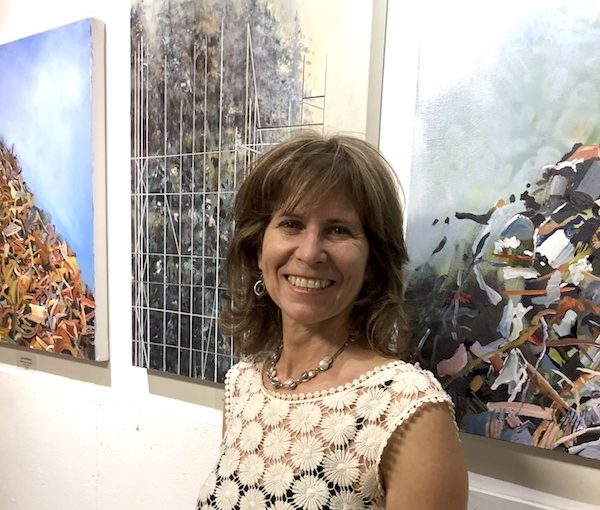 Lori Goldberg’s artwork reminds viewers that “that which we discard doesn’t disappear.” (photo from Lori Goldberg)

If you attend a performance at Queen Elizabeth Theatre, you will see the artwork of Lori Goldberg. She is one of the artists whose creations are at the theatre for another couple of weeks. The exhibit opened Oct. 29.

“Queen Elizabeth Theatre has a program for exhibiting artwork by local artists,” Goldberg told the Independent. “There was a call that was sent out a few years ago and I responded. I was accepted and the work was to be installed just when the pandemic began, so it was postponed until this year.

“It is an ideal venue,” she continued, “as thousands of people a week attend events at the Queen E.  My art has a message about climate change and it is important that it gets seen by as many people as possible. My pieces are on exhibit until Dec. 19, and people are only able to see it if they have a ticket to an event. Alternatively, I am available to take anyone interested on a private tour.”

The paintings in the exhibit come from three ongoing series: Plasticity, Poetics of the Discarded, and Reconstructing Nature.

“For many years, I have been investigating what happens when two opposing places – cities and nature – collide, connect and transform,” said Goldberg. “Through more awareness and experience firsthand, many of my works have ultimately been about the precarious relationship that we have with our natural world. Seeded in environmental advocacy, an animating factor in my practice has been reclaiming, recycling and reimagining refuse.”

In the description of Plasticity on her website, Goldberg mentions her discovery that ink can be transferred from, say, a plastic bag, to canvas. Her creative process invites such discoveries.

“I am a diverse artist and my ideas dictate my art,” she explained. “My practice has primarily focused on painting, but I have had to explore other mediums to adequately express my concept.  Besides paint, I have explored photography, assemblage and sewing.  I have worked with clay, glass, so-called ‘trash’ from my studio, single-use plastic bags that I fuse on canvas, and I have stuffed lost socks with fabric remnants given to me by tailors.”

For Goldberg, the camera is her “sketchbook” and a photo is generally the starting point for her painting.

“My work references the physical world at one point in my creative process,” she said. “When I research and gather information, I look for source material that is usually filtered through my own photo documentation. Other photo images can come from friends, the internet or by random discovery. I also use memory, dreams – and always my imagination. I take parts of photos that resonate for me and incorporate that visual language – usually recontextualizing and altering it – in my work.”

As an example, Goldberg spoke about the series Reconstructing Nature, which references nature/urban tensions found in Vancouver. “There is no lack of trees here and our city is in constant state of flux, with the demolishing of buildings and the construction of new ones, so I take photos of the nature that is all around me, but also of the scaffolding and cranes that are so prominent in the city as well,” she said. “In the Poetics of the Discarded series, I started by visiting a number of refuse sites, with an interest in memory and objects. Within the refuse, there were mounds and mounds of history: the detritus of days spent, life and death, business, conveniences used, sentimental things and so much more. I would photo-document these toppling heaps of refuse and re-contextualize and resurrect them as a visual reminder of the ongoing narrative between humans and their environment, reminding us quietly: that which we discard doesn’t disappear.”

While Goldberg does not paint on location often, she said, “My creative process is to go out into nature or the city, experience it, document it and return to my studio. Having said that, making work outdoors is becoming more interesting to me and it is a future direction that I plan to spend more time doing.”

With her art, Goldberg said, “I would like to think that I am creating work that is impactful to the viewer and especially the younger generation, that they will be empowered to take action towards making a difference as they engage with the world.

“The works are meant to be educational and I hope that they impart to the viewer a sense of personal responsibility – that they put to action what they feel and be one small ripple of change to create a better future for themselves.”

An educator for more than 30 years, Goldberg has taken her classroom outside and into the public arena, where, she said, “I create hands-on workshops using materials that address repairing the planet and healing ourselves. I created a project titled Lost Socks, where the public stuffed and sewed lost socks together to create a long tubular form that stood for connection, diversity and difference. Recently, I have used single-use plastic packaging to create wearable art. What I enjoy about these workshops is that they attract all ages and so it is intergenerational and accessible to all.

“Artists are essential in our communities,” she stressed. “Some of us choose to create work that challenges topics that are highly charged and sensitive, but, without venues in which to work and to exhibit, the messages cannot be passed on. I appreciate the exhibits I have had over my life at the JCC – I cannot imagine what would happen if we lost such a significant public space as the Sidney and Gertrude Zack Gallery. It is a venue for Jewish artists and Jewish content. It reinforces Jewish identity, conversations and connections. It is a gallery that has assisted me in my journey as an exhibiting artist and has given me opportunities to work with preschoolers, seniors and poets.”

Goldberg believes in giving back and donates her work frequently to different organizations, such as Big Brothers. “My recent donation was to Tikva Housing,” she said. “I gave them three paintings from my Judaica series. There is a satisfaction that is hard to explain, but it is a joy to be able to offer something of value to make others feel uplifted.”

Goldberg is currently applying for artist residencies in different parts of the world.

“I am interested in responding to the environment that I would be in and allowing it to dictate the direction of my work,” she said. “I want to contextualize my work in such a way that I am creating awareness about our healing of our planet but indirectly, through healing ourselves. Artist residencies offer opportunities for new perspectives and fewer distractions, so you can shed the restraints and discover what is there, but has been hidden.”