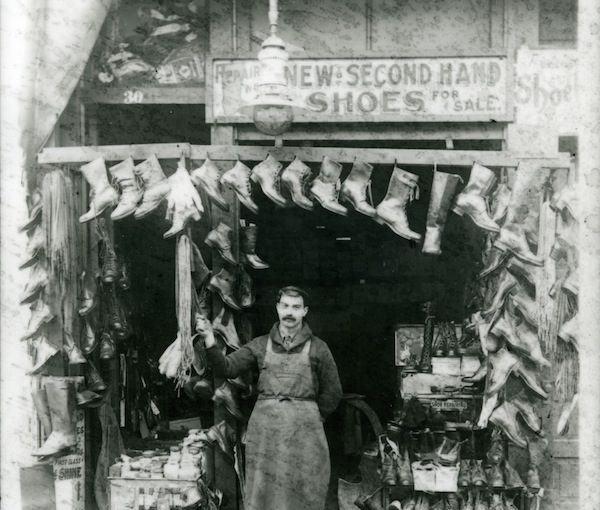 Nessim Menashe, born on the Isle of Rhodes in 1887, came to Portland in 1909. By 1914, he had established a shoe repair shop in northwest Portland, which he operated until 1921. (photo from Oregon Jewish Museum and Centre for Holocaust Education, OJM 03274)

Reading the history of the Oregon Jewish community can feel like reading B.C. Jewish history in a carnival mirror. Everything is familiar but just a little out of place.

Since the sister communities of Vancouver and Portland share both common history and common concerns about the future, there is much we can learn from each other. This is one reason why the Jewish Museum and Archives of British Columbia is excited to be hosting a trip to Portland in late May.

As in British Columbia, it was the gold rush that attracted the first Jews to Oregon. German-born Jacob Goldsmith and Lewis May opened a general store in Portland in 1849 and helped found the Masonic Temple the following year. The community’s growth kept pace with the rapidly growing city and, in 1858, the Reform congregation Beth Israel was established. Jews had a disproportionate presence among the merchant class, with one-third of the 146 merchants on record in 1860 being Jewish. They worked in the industries of clothing, tobacco, furniture and wholesale.

Just 328 kilometres north, the Jewish population of Victoria followed a similar trajectory. The earliest arrivals stepped off boats arriving from San Francisco in 1858. They, too, established careers primarily as merchants and, in 1863, opened Congregation Emanu-El, which continues to operate today. In the 1870s, Jewish merchants began placing their bets on the future of a small encampment on the Fraser River, going by the name of Granville. These bets paid off when Granville became Vancouver in 1886, the terminus of the intercontinental railway.

The Jewish populations of Portland and Vancouver have grown dramatically over the decades since, with new arrivals from all corners of the world making their contributions. In both locations, community organizations blossomed early on, providing essential social and cultural services. Today, the Jewish population of Portland, at 50,000, is roughly double that of Metro Vancouver, thanks largely to a wave of young American Jews who were drawn to Portland in the wake of the 2008 market crash.

To learn more about the Oregon Jewish community and to experience it firsthand, join the JMABC-led trip, which departs by chartered bus on Monday, May 27, and returns Wednesday, May 29. For more information and registration, visit jewishmuseum.ca/program/portland-jewish-history-tour. The deadline to register is March 31.