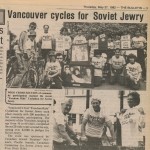 Growing up, the writer was involved in community campaigns to help free Soviet and other Jews suffering state-sponsored, organized persecution. These campaigns were international and Vancouver youth also participated in them. Here are but two of the many items in the JWB about these causes: top one is from 1982; below, from 1976.

I was recently reminded of a fashion-activist item many Jewish teens of my generation wore: the stainless-steel Soviet Jewry bracelet. Etched with the name and date of arrest of a single Jewish dissident in the Soviet Union, each bracelet transmitted to the wearer a deep and penetrating sense of social justice and tribal consciousness. I wore mine proudly, and recall being equally pleased to be selected from my seventh grade class to present handmade cards of encouragement to Avital Sharansky, the wife of jailed activist Anatoly Sharansky (later Israeli politician Natan Sharansky), when she visited Vancouver in the mid-1980s on her global campaign to secure his release. 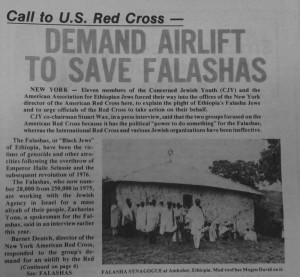 With the last of the Jewish communities having been freed from state-sponsored, organized persecution (other campaigns as my generation was growing up included the freeing of Ethiopian and Syrian Jews), there is little in the way of that Soviet Jewry bracelet campaign to bind today’s Jewish teens together in such a single, uncontroversial way. The modern state of Israel represents an ongoing cause, of course, but that issue is much more fraught: should a Jewish teen wear a bracelet etched with the name of a fallen Jewish soldier, or the name of one of the 182 Palestinian children currently (as of February 2015) being held in Israel detention – according to data provided by Defence for Children International? When it comes to social justice and activist solidarity, the issue of Israel is clearly complex.

I decided to poke around to see what Jewish teens these days are concerned with when it comes to issues and activism. What I found was a dizzying array of causes. From the website of the Orthodox NCSY (National Conference of Synagogue Youth), I found reports of teens volunteering with Habitat for Humanity and with Oklahoma tornado victims. Both USY (Conservative Judaism’s United Synagogue Youth) and NFTY (the Reform movement’s North American Federation of Temple Youth) select an annual theme to guide their social action and tikkun olam efforts: for 2014, USY chose “a focus on acceptance and tolerance including but not specific to gender, special needs, LGBTQ and racial equality,” according to its website. NFTY chose a similar theme for 2014-15: sexuality and gender equality. Habonim-Dror, which has various active local chapters, or kenim (nests), included a Maryland referendum initiative, for example, to campaign for undocumented high school graduates to become eligible to pay in-state university tuition fees.

A report from the Jewish Teen Funders network attempts to aggregate data from 71 Jewish teen foundations in the United States and Canada during 2013-14, showing where the total of nearly $1 million in philanthropic dollars went. Across 362 grants awarded, the top five issue-areas in descending order were: youth, education, special needs, chronic illness and poverty.

And none of this even begins to capture the array of charitable and social awareness efforts represented in today’s mitzvah projects popular among 12- and 13-year-olds marking their bat and bar mitzvahs, a trend that was absent in my generation, as I recall, anyway. As a complement to that, here in Ottawa, my own shul has been running a monthly b’nai bitzvah class by Cantor Jeremy Burko, which has been including discussion of Jewish-history-informed social justice topics, such as labor conditions in the fashion industry.

What’s the takeaway from this big picture? On one hand, there is no longer a single cause (if there ever was one) that unifies Jewish teens. And that means that tribalism is likely being replaced by a sense of universalism: the sense that social justice must necessarily cross ethnic and religious boundaries. On the other hand, today’s Jewish teens are no doubt indeed being united in the very belief that through Jewish social action, they can repair the world in a global, nuanced and holistic sense. So, while I admit to feeling some nostalgia for the simplicity of the worldview embodied in the Soviet Jewry bracelet I wore with pride and even some excitement, I think we should feel buoyed by the youthful energy and optimism in our midst that the world is ours – and theirs – for the repairing.