You won’t have to travel to the centre of the earth to meet award-winning, bestselling American author Nathan Englander. On the afternoon of Sunday, Oct. 22, he will be in Vancouver for a writers salon hosted by the Cherie Smith JCC Jewish Book Festival.

The Jewish Independent spoke to Englander by phone last week. He had just arrived in Seattle by train, his flight there having been canceled. In the midst of a tour for his latest novel, Dinner at the Center of the Earth (Alfred A. Knopf, 2017), he spoke to the JI between back-to-back events.

Englander’s novel is a compelling read in which he explores the Israeli-Palestinian conflict via five characters. To simply quote from the publishers, who sum it up succinctly: “A prisoner in a secret cell. The guard who has watched over him a dozen years. An American waitress in Paris. A young Palestinian man in Berlin who strikes up an odd friendship with a wealthy Canadian businessman. And the General, Israel’s most controversial leader, who lies dying in a hospital, the only man who knows of the prisoner’s existence.”

Each of these characters is fascinating, and Englander displays a remarkable talent for being able to put himself inside people’s heads, to clearly and realistically explain their feelings, their motivations. The characters both set events in motion and are carried along by events out of their control. One of the main characters, “the General,” lies in a coma and yet Englander fully develops him as a living, breathing human being.

The General is obviously based on former Israeli prime minister Ariel Sharon, who died in 2014 after having been in a coma since 2006. Englander’s character is a large man, he has been in a coma for years, he once ruled the country and was a tough, controversial military figure (“an unrelenting warrior”), his wife was named Lily, one of his sons was shot and killed, etc., etc. Nonetheless, Englander was adamant that the character not be seen as Sharon, but as “inspired” by him.

Englander said he knew people would come “locked and loaded with [their] politics to this story…. I thought it was really important that, wherever the parallels are [from] one reality to my fictional reality, that my general be his own character … so that I could fully empathize and fully get into his head. Even for me, I needed to build my own person, whatever the warring personal parallels are.” 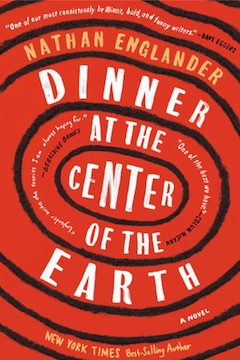 Reading Dinner at the Center of the Earth, one does get the impression that Englander was trying to sort out his own views about the conflict, rather than make any pronouncements or come down on any particular side.

“It was imperative to me that this not be didactic and not be a big lecture,” he said. “I have a 500-page version of the book that I cut in half. I just wanted it to be story-driven and character-driven, for people to be able to enter into the discussion or to reflect on where they entered the book and where they left it, on their own positions.”

For his part, he said he’s learned a lot about the book from being on the road. One of his first tour events was with fellow writer Jonathan Safran Foer, who commented on the parallels between the dinner of the book’s title and a dinner that takes place between the guard and the prisoner; an aspect that Englander hadn’t considered. “I wish I had been smart enough to consciously think of it,” he said, “but the subconscious takes care of that for you.”

While Englander insists that “there’s no position in this book,” one woman, after a tour event, argued that it takes “a position on peace,” that it’s hopeful about the prospect. From this and other exchanges, Englander admitted, “I really do believe that the more it [peace] seems impossible, the more I believe we have to make it possible.” But, he said, about writing any messages into the book, “I can’t tell you how much of it was conscious intent versus subconscious work. For me, all my conscious intent was this idea of it to land on no side, for us to explore.”

For Englander, two lessons learned from being a reader himself helped shape this novel. One is that a well-functioning book represents a shared experience between an author and a reader. “I used my brain to write it and then there’s this physical thing that you can pick up and read,” he said, and so, in writing Dinner, he fought “against all punditry and ‘mansplaining’ and lecturing and … didactic” inclinations.

The other aspect he keeps in mind while writing, he said, is all the unanswered questions he had as a boy growing up in a religious environment. “It’s the books where people were brave enough to wrestle with the questions that changed me. All of the books that changed my life, that saved me, none of them had answers, they just were by authors who truly were willing to wrestle with terrifying questions. So, for me, I really wanted to structure this [novel] to swing back and forth and back and forth…. I wanted to mirror the circles of the conflict, these unending cycles.”

The story of Dinner at the Center of the Earth had been percolating since Sharon became prime minister of Israel in 2001. About the Second Intifada and Sharon’s election win, Englander said, “That was my first adult political heartbreak of that size…. All those years of work [on peace], it was right there.”

The more distant we get from peace, he said, the more “you may think it’s impossible, but it was really right there for the taking. I just couldn’t shake it. I was desperate to explore this unending conflict. So, yes, it may be just the tiniest glimmer of optimism [in the novel] but I do think it’s optimistic in the end, however dark some of the turns are.”

He hasn’t been writing the novel for 16 years, of course. He had the idea and needed a structure for it, which he found on his last book tour, while in Israel. The front page of the newspaper he was reading had a story on “Prisoner X, this Australian guy [who had a life] so similar to my life in a lot of ways – maybe he got more Zionism and I got more Bible but [he was] a religious, Anglo Jew who ends up moving to Israel.” This man not only “adopted an ideology” but joined Mossad, did “scary deep undercover stuff and then becomes a traitor.” His situation made Englander wonder, “What would it take to flip someone for empathy, out of feeling for the other side? That’s what would interest me,” so Prisoner X became Dinner’s Prisoner Z.

Englander’s imagination seems to know no bounds. His stories and novels are set in various countries (Russia, Israel, United States, Argentina, to name a handful) and his characters range from an Orthodox rabbi who supplements his income by being a mall Santa Claus – one of the many people readers meet in Englander’s first book, the collection of short stories For the Relief of Unbearable Urges (Alfred A. Knopf, 1999) – to the General of Dinner, his fourth book. Englander is also working on a second play because, he joked, with 10 years between his first and second book, he had to tell people he “wrote book” for a living and, since his first play in 2012, he’s been writing “books and play.”

One theme that runs through all his work, regardless of form, topic or setting, he said, is that they explore “grey space, or Schrödinger’s cats, multiple realities.”

“As the books go by, I see that I’m clearly … obsessed with this grey space, which I think is probably from having a black-and-white education and growing up in a black-and-white reality,” he said. “Especially now, I can’t understand people who can’t see the other side.”

By way of example, he said, “I learned that in Israel, where I was a Jew living in Jerusalem, whose holy site was the Temple Mount … it became clear to me this wasn’t a disagreement, or something on a spectrum, that my Palestinian neighbour, she is living in Al-Quds and Haram al-Sharif is her holy site. We were living in the same physical space but in literally separate realities.”

This is also the case in the United States now, he added. “There are regular citizens that, because of the dual realities we now have here … you could show them two pictures of an inauguration, one with more people and one with less, and you’d have regular folks say, yes, the picture with less people has more people in it. That’s not an opinion, that’s inhabiting a different reality.”

Human beings can make anything happen, said Englander. “We’ve sent people to the moon and brought them back,” he said, and our cellphones have far more power than did any Apollo mission. So, you want to make peace? “Everyone knows the math there. Don’t anybody pretend they don’t know who’s going to trade what. There are some very minor, tweakable things. Don’t tell me everybody doesn’t know what they need to do to make that peace happen tomorrow, if they wanted it to happen.”

Englander immerses himself in his work. For The Ministry of Special Cases (Alfred A. Knopf, 2007), a novel about Argentina’s Dirty War, he did years of research. “You need to own that world,” he said, in order “to drop my own ministry on top of that city [Buenos Aires].” He said it is akin to being an artist in, say, Cubism: “You need to know how to paint before you can put both eyes on one side of the face.”

With Dinner at the Center of the Earth, Englander said he was returning to familiar ground, which required much less research.

“I’ve had so many different sides of the experience, from the Jerusalem of the Bible that I had my whole life, to living in Israel in the First Intifada to getting a degree in Judaic studies to living in Israel for another five years, to watching the news a million hours a day to reading the papers.” He’s also on the faculty of New York University, which has taken him to cities like Paris and Berlin, both of which are integral places in his latest novel. “I was very interested in exploring territories that felt like ‘my territories,’ including historical [ones],” he said.

For things he didn’t know, he sought advice, such as speaking to a doctor friend about what it means to be in a coma and learning about boats and the mechanics of sailing from people who knew about those things.

As for the writing of the book and how it came out, he said that he reworked the rough draft of the novel for almost a year, while he and his family were in Zomba, Malawi, where his wife, Rachel, was doing research for her PhD. “It was an extraordinary place for me to be, somewhere so far and so radically different from my own realities and where I’d lived…. It was a very special place from which to imagine these places and draw off memory.”

The pre-book festival salon will take place Oct. 22, 2-4 p.m., at a private residence (address will be given to ticket buyers). Tickets are $72, which includes copy of Dinner at the Center of the Earth and a reception. Visit jewishbookfestival.ca to reserve your place at the salon and for more information about this year’s festival, which takes place Nov. 25-30.