A powerful family saga, The Beauty Queen of Jerusalem (Thomas Dunne Books, 2016) by Sarit Yishai-Levi is brutally honest. It starts with the narrator, Gabriela, talking about her childhood in 1950s Jerusalem. Her relationship with her mother, Luna, is strained at best; more accurately, a mutual aversion. Luna is a dismal mother and a horrid wife, a cold, spiteful woman. Disliking her immensely, I wanted to know what happened to Gabriela, but the book didn’t go in that direction. 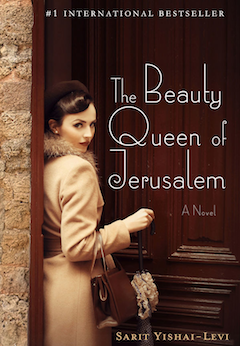 Instead of moving the action forward, the author goes back in time, almost to the banishment of the Jews from Spain. From there, she follows several generations of the Ermosas, a family of merchants in Jerusalem. The story that emerges is an anatomy of animus, a fictional dissertation on the topic of what happens to people who deny love – because they all deny it.

Rafael doesn’t love his wife Mercada. He married her at the behest of his mother, an obedient Jewish son doing his duty, while his heart belonged to another for all of his life. He doesn’t allow himself even to acknowledge his torn soul, but his unloving marriage poisons the family for generations to come. Some describe it as a curse, and Mercada becomes a bitter, hateful woman.

When Mercada and Rafael’s sunny-natured son Gabriel falls in love with a woman not approved by his family, his mother punishes him by marrying him off to the worst bride she can find. She ruthlessly ruins her son’s life and never regrets it.

The curse passes on to Rosa, Gabriel’s wife and one of the few nice characters in the book. Rosa is not beautiful or educated. Poor and orphaned when she was young, she took care of her younger brother from the age of 10. She is kind, with a heart full of emotions she doesn’t know how to express. She would have loved Gabriel, if he were even a little bit willing, a tad more tolerant of her faults, but instead, Gabriel despises her. No matter how hard Rosa tries, Gabriel doesn’t accept her, and his antipathy fills his life with venom and sadness.

Of course, their daughter Luna, born of such a union, doesn’t know how to love at all. The most beautiful woman in Jerusalem, the beauty queen of the title, Luna is frigid and uncaring. She adores clothing and makeup but the only person she truly loves is herself. Repulsed by her husband’s touch, she hates his sexual advances. She doesn’t even try to understand his pains or his interests, and her treatment of their young daughter is cruel. She is a horrible character but, for some reason, the author dedicates most of the book to her. Perhaps she was exploring Luna as the embodiment of self-absorption, but there is little or no pleasure in reading these ruminations.

Only in the last fifth of the book does the story return to Gabriela, showing how hard it was for her to break the curse, to learn to love. Forgiveness, like love, is something the Ermosa family lacked, too, and it takes Gabriela years of self-hatred to even grasp the concept.

Overall, none of the major players in the tale is likable, and it’s difficult to understand their stubborn resistance to love. This difficulty colored my perception of the novel as a whole, and I didn’t enjoy the jumps back and forth in time either. They made the story feel like a jigsaw puzzle, and even when I assembled the entire picture, the squiggly lines between the tiles were blurry.

Fortunately, the Ermosa family drama unfolded on the background of Israeli history, and the historical aspect of this book was fascinating. The Turkish rule of Palestine and the British Mandate, the Zionist movement and the Declaration of Independence, the war of 1948 and the siege of Jerusalem by the Arabs – the Ermosa family lived through it all.

They lived through the Holocaust, never even noticing it. While Jews died by the millions in Europe, the Ermosas’ petty concerns focused on their small shop and their unloving spouses. While the Etzel (aka the Irgun) unleashed bloody terror on the British, with constant bombings and shootings, the Ermosas only cared about their personal safety and their neighbors’ approval.

Some of the younger generation, Luna’s sisters in particular, try to participate, but never Luna or her parents. Gabriel forbids his daughters anything nontraditional, and filial obedience was mandatory in this family of narrow-minded people who didn’t know how to love.

The Beauty Queen of Jerusalem was originally published in 2013 in Hebrew. The English version was translated by Anthony Berris.