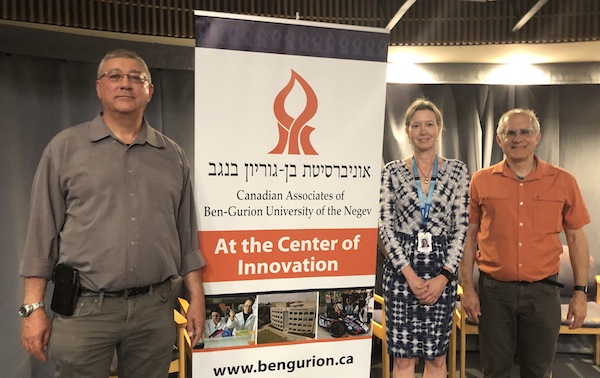 The use of artificial intelligence is intended “to harness the power of computers with math and statistics theory to improve the diagnosis and care of patients,” according to Dr. Yuval Shahar, professor of Ben-Gurion University of the Negev’s software and information systems engineering department.

Between May 23 and 30, Canadian Associates of BGU, B.C. and Alberta Region, hosted a visit from Shahar, whose research explores how information technologies can be used to improve numerous aspects of healthcare.

Shahar has spent 30 years working in digital medicine, gained his bachelor and medical degrees from the Hebrew University, and a master’s in computer science from Yale University. He did his doctorate at Stanford University, where he also spent 10 years as a faculty member in the computer science and medicine department. He founded BGU’s Medical Informatics Research Centre in 2000 and, in 2017, was elected as a founding member of the International Academy of Health Sciences Informatics.

During his time in Vancouver, Shahar presented his work to full lecture halls across town, including at Simon Fraser University, University of British Columbia, various government offices, Vancouver General Hospital, Pacific Blue Cross and some start-ups.

The program with which Shahar works requires patients to wear an ECG (echocardiographic) belt around their chest to monitor their heart, as well as a blood pressure cuff. This allows a patient to receive care 24 hours a day. Using Bluetooth, the data collected from these devices are sent to the patient’s cellphone and then to the program’s server in Israel.

MobiGuide was developed with 13 partners in Europe, including Italy, Spain, the Netherlands and Austria. Even with 63 other projects competing for funding – including teams at Oxford and Cambridge universities – the MobiGuide team received seven million euros. “Ben-Gurion already had the necessary technology working,” said Shahar.

The program is led by an Israeli team in the main technology centre at BGU, with the partners from across Europe. Shahar explained how the system works, using the analogy of today’s mapping software. “It’s like a medical version of GPS,” he said. Right now, the program’s focus is on diabetes and hypertension.

One advantage of MobiGuide is the way the server handles massive amounts of clinical research, explained Shahar. For instance, when international guidelines for treating hypertension change, you can update that information in one place and it will be reflected throughout the entire system. That information is then immediately available to all patients and their physicians on the MobiGuide system.

“There are millions of patients on the system now,” said Shahar. “Each cellphone has a customized version of the guidelines in the program so the phone alerts the ‘mothership’ and the server examines the data for anomalies. The mothership knows the full patient history and clinical guidelines.”

The server in Israel also reminds patients to make adjustments, such as to their diet. A phone can contact the mothership to ask for advice, and recommendations are customized for each individual. Personal preferences can be adjusted depending on the patient – for example, when they prefer to be alerted to take their medications. If they are on vacation, they can ask the system not to alert them as frequently.

The system can also be notified to anticipate spikes in blood glucose. For instance, if a patient is attending a wedding and expects to eat rich food, she can tell the system first that it need not be concerned about this. Likewise, if a patient lives alone and has nobody to rely on for support with their health, the system can issue different instructions than for someone with a companion.

Humans are, however, still essential to the smooth running of the system. Shahar relies on “medical-knowledge engineers, graduate students,” who digitize clinical knowledge so that it can be applied on the system. But, he said, “It’s a sign of the future. Chronic patients won’t need to be in clinics all of the time. You want to be there only if there’s no other way.” It is cheaper to offer care in the community, especially in remote areas, even while offering round-the-clock observation.

To date, feedback from patients and the professional community has been consistently good. Compliance with clinical guidelines by physicians has improved, preventing a great deal of human error and possibly fatal mistakes, said Shahar. Likewise, he said, “Compliance was very high, we saw real patient empowerment.”

Patients “said that their quality of life had improved, they felt more secure and safe,” said Shahar. This is important, he explained, because AI in healthcare is not just about technology – human psychology has a huge impact on both patient treatment and outcomes.

As an example of the program’s success, Shahar said, in Barcelona, pregnant women with gestational diabetes were studied. The blood pressure of the research patients was significantly lower than in the control group, who attended in-person clinics. Shahar explained that these data were accompanied by a sense that a “benevolent big brother was monitoring them, and someone was sending alerts and recommendations every few days.”

After a four-year evaluation hosted by a veterans hospital in Palo Alto, Calif., there is evidence that the software developed by Shahar’s team has helped physicians manage oncology data better than before. With only seven to 10 minutes to give to each patient, physicians simply do not have the time to review all the material they need to, while considering its application and significance to individual patients.

In his talk at the Eye Care Centre at VGH, Shahar recalled asking a patient if she minded getting numerous texts from MobiGuide every day. “She laughed, I get 50 texts from my friends, what’s another 20?” he said. But, in reality, she clarified, “How could I mind? This is about the health of my baby.” Shahar added, “They feel that someone knows them deeply.”

According to David Berson, regional executive director of CABGU, Shahar’s visit was a success. He said BGU will examine how Shahar’s research in medical informatics can dovetail with local efforts to revolutionize healthcare, exploring the potential for “patient empowerment, remote monitoring, decision-making support and beyond.”

BGU board member and innovation expert Jonathan Miodowski said there was a need to balance between “blue-sky research and practical solutions” to real-world problems. “Multidisciplinary approach is a hot topic for universities these days – it is critical to bring different perspectives to the research,” he said.

Miodowski described Israel as a world leader in innovation. Last year, Canada raised $4.7 billion in start-up capital, he said, noting that Israeli start-ups, by contrast, raised $10 billion. “For a country that is two-thirds the size of Vancouver Island, that’s pretty significant,” he said. “In a sense, the size of the territory is very convenient. Cross-pollination of ideas is inevitable.”

Miodowski also spoke well of the Vancouver visit. “We planted some seeds on both sides,” he said. “It was very positive. There was real interest in Yuval’s research, real appreciation for what Israel has done in terms of its innovation ecosystem.”