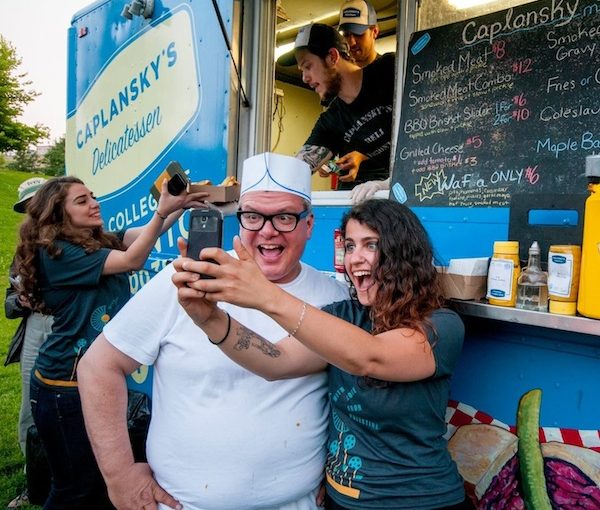 As Zane Caplansky describes it, his journey in the world of deli, which ultimately led him from Toronto to Tofino, began on a hot summer night in 2007.

Sitting in a bar on Toronto’s Dupont Street, Caplansky was “hangry” (hungry and angry). He thought to himself, “Why can’t you get a decent smoked meat sandwich in this city? I am going to have to do it myself.” Toronto offered nothing that, to his tastes, compared to Schwartz’s Deli in Montreal.

As a child, whenever grownups would ask what he wanted to do when he was older, he said he wanted to own a restaurant. As an adult, he had worked in restaurants in every capacity, from dishwasher to manager, but not as an owner.

“That night, in a fit of hanger, I had a deli epiphany. Deli is so me. Deli has shtick, deli has chutzpah, deli has flavour. I am not a fine dining or fast food person. I am a deli guy,” he told the Independent. “That night, I resolved that this is what I was going to do.”

He opened Caplansky’s in 2008 in a dive bar in the Little Italy neighbourhood – it began as what many regard as Toronto’s first “pop-up restaurant.”

Shortly thereafter, David Sax, author of the book Save the Deli, wrote a piece for the Globe and Mail about the return of Jewish food to downtown Toronto.

“Every Jew in the city saw that headline and we got slaughtered. Everyone showed up and wanted a sandwich,” said Caplansky.

Following that success, he started what was to be his flagship location, not far from Kensington Market. There is also a Caplansky’s Deli at Toronto’s Pearson Airport in Terminal 3.

After a few years, the stresses of running the downtown business and continued complications with his landlord led him to consider a change.

In December 2017, he had a conversation with his wife, who hails from Tofino. “We were in the guest room of my in-laws when we decided to close the downtown Toronto restaurant and move here,” he said. “Now we are living our dream. The restaurant at the airport has afforded us the financial freedom to do what we have done.”

From 2011 to 2016, Caplansky had a line of mustards. From its earliest days, the restaurant used the mustard on all the food items it sold, and people would send him emails, asking how they could get some for home.

When considering what to do after settling in Tofino in early 2019, Caplansky returned to the idea of mustard. Later in 2019, when he was asked by the Toronto Blue Jays to open a kiosk at Rogers Centre, he saw it as an opportunity to relaunch the product. 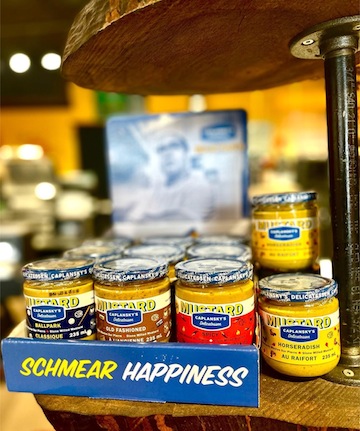 “The aura of Major League Baseball is a very special thing. And the mustards were a hit,” he said. “As a Blue Jays fan, it was such a big deal to see fans eating my food in the stands.”

When the pandemic struck in March 2020, Caplansky was prepared. People started ordering products online and, as Caplansky recounts, business boomed. Retailers and distributors, too, were receptive to working with him and his products are now sold in nearly 500 retailers across Canada and the United States. His biggest problem, he said, is keeping up with demand.

“It’s going at a pace I never would have imagined,” he said.

“To me, deli is the food you celebrate with. Our mustard connects with people to a degree that I never truly appreciated or anticipated. The secret ingredient of our product is resilience. I think people really identify and connect with it,” he explained.

Caplansky takes pride in creating what he calls a “unique quirk” around his deli. Oftentimes, people would come into the restaurant and tell him that, despite its mere 15-year history, they remember coming into Caplansky’s with their parents and grandparents. Despite this chronological impossibility, he would never correct them.

“It was amazing to us that people thought that it had been around forever. The idea of a deli holds a place in people’s minds,” he mused. “It’s truly a blessing.”

The entrepreneur has appeared on CBC’s Dragons’ Den several times and been a regular on Food Network Canada.