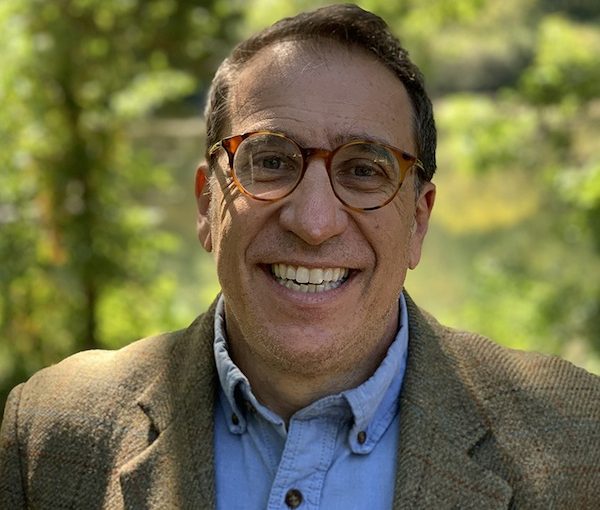 Nigel Savage, president and chief executive officer of Hazon, is one of the keynote speakers for Jewish Federation of Greater Vancouver’s annual campaign opening on Sept. 8. (photo from JFGV)

Nigel Savage, president and chief executive officer of Hazon, is looking forward to addressing the Vancouver Jewish community Sept. 8 as one of the keynote speakers for Jewish Federation of Greater Vancouver’s annual campaign opening. “The pandemic is a reminder of why we have and why we need central institutions like federations for the Jewish community,” he said.

“Hazon is working to turn the Jewish community outwards, address environmental sustainability and to use that process to strengthen Jewish life,” explained Savage in an interview with the Independent. “I think of the Vancouver Jewish community as one made of people who choose to live in the Pacific Northwest and have a sensibility of caring for the world and its natural resources, so I want to sketch out what may be possible for all of us in the long term.”

Savage was a professional fund manager in London, England, where he worked for NM Rothschild and was co-head of UK equities at Govett. After nine years in the financial world, he opted to take a sabbatical year and study at Pardes in Jerusalem. “I had an amazing time and stayed on in Israel as I tried to figure out what I wanted to do with my life,” he recalled.

A friend invited him to join a hike from the Mediterranean Sea to the Sea of Galilee, and Savage, who described himself as “a chubby, nerdy, intellectual English kid who grew up in Manchester and never really set foot outdoors,” agreed. He loved the hike and, as he began doing more physical activities outdoors, recognized it as a great way to bring Jewish tradition to life and connect with others. “We didn’t enter Jewish history in a synagogue or JCC. We entered it in relationship to the land of Israel, with a relationship to food, land, climate, language. That’s what the Torah is a record of,” he said.

Savage’s time in Israel was the impetus for the creation of what is today one of the largest faith-based environmental organizations in the United States. Hazon’s goal is to strengthen Jewish life and contribute to a more environmentally sustainable world. It calls itself the “Jewish lab for sustainability” and strives to effect change through immersive experiences and by inspiring individuals and communities to commit to change – particularly with respect to food systems.

Hazon is focused on Jewish outdoor, food, farming and environmental education (JOFFE) and, since its inception in 2000, has been dedicated to helping establish and inspire change. “In the Bay Area, there’s Urban Adama and Wilderness Torah, and, in north San Diego, there’s Coastal Roots Farm. In Boulder, there’s the Milk and Honey Farm and, in Toronto, we have Shoresh,” he said.

Savage’s list of accolades suggests that he is achieving his goal at Hazon. In 2015, he was awarded an honourary doctorate by the Jewish Theological Seminary and he’s been named a member of the Forward 50, the annual list of the 50 most influential Jewish people in the United States, on two occasions.

Savage suggested that every Jewish institution in the city could begin a process to establish a coherent food plan over the next seven years. It might include policies regarding use of plastic bottles, whether to serve meat and soda, carbon neutrality goals for community buildings, and other actions in relation to food and land use.

“At Hazon, we want to treat these questions as real questions and involve people in the Jewish community, from teenagers to rabbis. We want to start a real conversation which draws on Jewish tradition, the best of what’s happening in Vancouver and Canada, and use that process so that, by 2029, the Vancouver Jewish community has integrated food polices in all its institutions that reflect our values.”

Hazon’s goal is to invite communities to unpack questions like these and to act as a resource on matters of sustainability and Jewish efforts to promote it.

“If we think about the nature of obesity, diabetes and heart disease, these are chronic illnesses,” Savage noted. “The world needs us to slowly and steadily change how we’re living so that all these people can live sustainably on this planet. Right now, we have a 10- or 15-year window to change the trajectory of Jewish civilization. We can’t complete this task by ourselves, but neither are we free to desist from it.”

Savage will be joined at the Federation campaign launch by fellow keynote speaker Sarah Hurwitz, author of Here All Along: Finding Meaning, Spirituality and a Deeper Connection to Life – in Judaism (After Finally Choosing to Look There) and former speech writer for the Obamas. To register for the event, which starts at 5 p.m., go to jewishvancouver.com/faco2020.