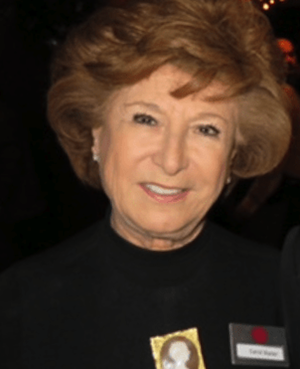 Carol Slater, a former vice-president of National Council of Jewish Women of Canada, was presented with the first-ever Trailblazers Award for helping bring to Canada an innovative Israeli-founded education program that empowers mothers of preschool children.

The award, presented by the Mothers Matter Centre, was part of a virtual event May 5. (See jewishindependent.ca/mothers-importance.)

Slater was one of a small group of people who brought the program Home Instruction for Parents of Preschool Youngsters (HIPPY) to Canada two decades ago. The initiative, which has taken off in countries worldwide, began out of the Britannia Community Centre and Britannia Community Secondary School, in East Vancouver. The national headquarters of the program remains in Vancouver, under the auspices of the Mothers Matter Centre. HIPPY Canada changed its name in 2017 to the Mothers Matter Centre to reflect the fact that they deliver a range of programs, although HIPPY remains the core of the organization.

Slater spoke with the Independent recently, along with Wazi Dlamini-Kapenda, a Vancouverite who was the first HIPPY director in Canada and remains head of the national program.

HIPPY was started in 1969 at the Hebrew University of Jerusalem by the late Dr. Avima Lombard.

“When the first wave of African immigrants came to Israel and spoke no Hebrew, [Lombard] realized the disconnect between the children and the parents,” Slater said. “The parents didn’t know what was expected of the children, or of the parents.”

Slater and Dlamini-Kapenda take pride in the relative simplicity of the HIPPY structure. A new program is developed when a community identifies HIPPY as a program that would be of benefit to mothers and children. The community then approaches the Mothers Matter Centre to help with starting it up. In other cases, MMC approaches the community to let them know about the program and support them in implementing it, providing seed funding to get it off the ground, said Dlamini-Kapenda. The community can start with a minimum of two to four home visitors, depending on the size of the community, then each visitor recruits 10 to 12 families. The home visitor drops in on each family every week for at least an hour during the school year, and teaches the mother the week’s activities using the HIPPY curriculum. The lessons are taught using role-play, in which the home visitor and the mother take turns being the teacher (mother) and the student (child), practising the lesson before the mother teaches the week’s lessons to their preschooler.

“One of the very critical things,” Slater said, “is giving the parent the confidence that she can go to [her child’s] school because what has very often happened in immigrant situations is that the mother may not speak the language very well and, if she doesn’t go to school, she doesn’t follow her child and if she doesn’t follow her child, her child can fall behind and she doesn’t know about it. One of the most important things is the empowerment of the parent to understand that she is the first teacher of her children. It’s a fantastic concept when you think of it. So simple.”

The program is offered free to mothers and all supplies are provided, although almost everything that the mother will need to do activities can be found in the home. The families targeted for the HIPPY program are those with low literacy or deemed “at risk.” Special emphasis is given to immigrant and refugee communities and Indigenous populations. HIPPY has separate streams for multicultural and Indigenous families, recognizing different approaches to learning. Home visitors will usually be recruited from within the linguistic communities they serve.

Slater’s award recognizes her work in getting HIPPY off the ground in 2001.

“Carol was very instrumental in getting the funding and knocking on doors and talking to every person in a position to be able to get us the first funding to run the first four or five years of the program here in Canada,” said Dlamini-Kapenda. “I don’t know, without Carol, how far we would have gone.”

Dr. Debbie Bell, founding director of Simon Fraser University’s community education program, was working on developing strategies to create access to education for low-literacy communities. Slater and Bell connected after Slater happened upon a brochure about the nascent program. Slater, who has lived in Israel, Vancouver and, now, Montreal, saw it as an ideal fit for National Council of Jewish Women.

Seizing the moment, Slater beat the bushes for financing. Bell was emphatic that they should not launch HIPPY without a budget for several years of programming because that would be unfair to participating families. Slater went to Ottawa and, with the help of several key figures, obtained funding from the federal health ministry to get HIPPY up and running.

She credits Dr. Hedy Fry, member of Parliament for Vancouver-Centre, as an early supporter.

“She was so excited about the program,” Slater recalled. “She met Debbie and myself and we used to meet in her office. She sat me at a desk, she gave me a list of all the cabinet ministers and their secretaries and their private phone numbers. I just sat there and I phoned.”

An assistant to Allan Rock, who was then minister of health, was equally supportive. Slater left the meeting with a commitment for $250,000, which jumpstarted HIPPY Canada.

Slater also credits late Vancouver philanthropist Jack Diamond and the Diamond Foundation for crucial support that got the program started. The Vancouver Foundation also committed to four years of funding, something they had never done before, said Dlamini-Kapenda, who was then hired as the first HIPPY coordinator in Canada.

At the awards ceremony earlier this month, Canada’s chief public health officer, Dr. Theresa Tam, and Dr. Cindy Blackstock, a Gitxsan activist for child welfare and a professor in McGill University’s School of Social Work, received the Because Mothers Matter Award for their noteworthy professional accomplishments while giving back to their community. Two HIPPY mothers with extraordinary stories, Nusrat Awan and Jessica Seegerts, were also honoured.