While it might be hard to contemplate cooking on these hot summer days, there are a few recent cookbooks enticing enough to draw you into the kitchen – with savory results. 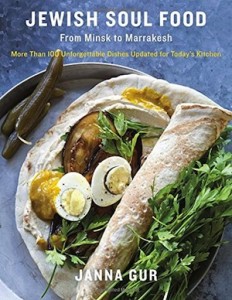 Gur’s family immigrated to Israel from Riga, Latvia, in 1974. She completed a bachelor’s degree in English literature and art history and a master’s degree in translation and literary theory. In 1991, she and her husband founded Al Hashulchan, a Hebrew food magazine.

In an interview with thekitchn.com, Gur explains that she wrote this new cookbook “to give the North American audience a taste of what Jewish foods could be – how diverse and wonderful they are, and how possible it is to make them a part of our modern cooking.”

Gur’s aim was to make a focused, edited and approachable collection of 100 recipes from as many Jewish communities as possible. She wanted them to be authentic, to fit the modern kitchen and to answer the question, What is the soul of the dish “that makes us relish it and want to make it ours?”

There are 94 color illustrations, which are beautiful and mouth-watering.

For me, as a cook, the three most useful aspects of a cookbook are all here: every recipe has its country of origin, a brief story and numbered instructions.

And what wonderful countries of origin for these recipes – Morocco, Hungary, Bulgaria, Romania, Algeria, Libya, North Africa, Georgia, Kurdistan, Russia, Persia, Syria, Turkey, Bulgaria, Iraq, India, Yemen and America. As the book’s promotional material notes, the cuisines from most of these countries may be “on the verge of extinction … because almost none of the Jewish communities in which they developed and thrived still exist. But they continue to be viable in Israel, where there are still cooks from the immigrant generations who know and love these dishes. Israel has become a living laboratory for this beloved and endangered Jewish food.” And the hope for Jewish Soul Food is that it will help “preserve traditional cuisine for future generations” by encouraging people to cook it.

For more about Gur, visit jannagur.com. 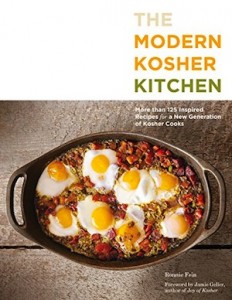 She writes on her website (ronniefein.com): “They are, like this website, my efforts to bring the world of kosher cooking into 21st-century America. Just as our kosher ancestors cooked the same foods as their neighbors in Eastern Europe or the Middle East or wherever they happened to live, and adapted it to the dietary laws, why shouldn’t we, right here in America?”

Fein says she wrote The Modern Kosher Kitchen “to try to inspire all home cooks who keep kosher and would like to prepare the kinds of foods that informed, sophisticated – hip – folks want to cook today.”

And the focus is, indeed, on modern American recipes – “multicultural, innovative and interesting.” Every recipe is marked meat, dairy or pareve, and every recipe has some introductory remarks, which I think make the recipe so much more personal and interesting. As well, every recipe has a “Did you know?” or serving suggestions and substitutions. Most recipes also have a boxed tip, piece of advice. When a recipe runs to a second page, it is always opposite, so the cook does not have to turn the page while working.

Although there are 127 recipes, there are only 39 beautiful, mouth-watering color photographs – but that is certainly not a reason to pass up this book. My only criticism about the cookbook is that the instructions are in paragraphs and not numbered, which I find easier to follow.

Rounding out these reviews is not a kosher cookbook per se, however, by eliminating the cheese or using pareve chicken stock, some of the recipes could be adapted. 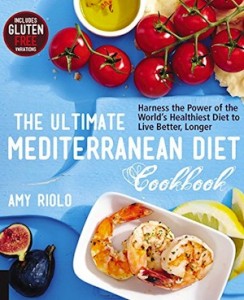 Amy Riolo (amyriolo.com) is an Italian American whose ancestors came from Calabria. She is the author of many cookbooks, a chef and a TV personality, so I felt that her most recent publication – The Ultimate Mediterranean Diet Cookbook (Fair Winds Press, 2015) – was worth noting.

The 101 recipes in this book were included because of their taste, authenticity and nutritional value. They are low in fat, cholesterol and sodium, and packed with vitamins, minerals and healthful properties. There are also seven recipes specifically listed as alternatively gluten free.

The recipes are organized according to the Mediterranean diet pyramid with fruits, vegetables, grains, olive oil, beans, nuts, legumes and seeds, herbs and spices at the bottom, for every meal to be based on these foods. Above them are fish and seafood to be served twice a week. Above them are poultry, eggs, cheese and yogurt to be served in moderate portions daily or weekly. At the top of the pyramid are the least-served foods – meats and sweets.

Each recipe has a little story, the list of ingredients opposite the instructions (regrettably, not numbered) and a boxed Mediterranean lifestyle tip to “enhance the daily living aspects of the eating plan,” along with meal plans and serving suggestions.

At the end are a glossary with pantry foods defined, a bibliography and a selection of websites, magazine/newspaper articles and journals for further reading.

The 69 color illustrations are so tempting cooks will be motivated to rush to the kitchen to start making these dishes.