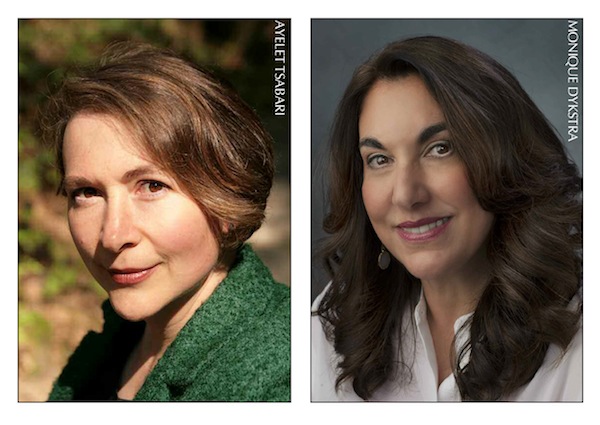 None of us knows what lies ahead. We might think we do, but a lack of awareness one moment can have tragic impacts, mental or physical illness can overtake us, and our actions and reactions can hurt ourselves and others, whether harm is intended or not. Control is a fiction. And two recently published short story collections that will be featured at the Cherie Smith JCC Jewish Book Festival on Feb. 8 explore that fact with tales that should make most of us feel grateful for the relative boringness of our lives.

Poet Rachel Rose’s debut novel, The Octopus Has Three Hearts, presents a series of unconventional characters in life-challenging situations difficult to imagine oneself in and yet portraying familiar emotions. The characters in Ami Sands Brodoff’s The Sleep of Apples will be easier for many readers to recognize in themselves, but they are also a diverse group of people for whom living is more of a task than a pleasure. In both collections, instances of uncomplicated joy, love and connection are rare. Nevertheless, they leave one feeling melancholically appreciative of the incomparable value of life, and acutely mindful of its fragile nature.

Rose’s stories are explicitly linked by the animals with whom her people interact, from dogs to rats to pigs to parrots and others, including, of course, an octopus. The title story centres around a polyamorous relationship, the narrator husband, his wife (who is a biologist at an aquarium) and one of his wife’s partners trying to find an octopus who’s escaped their tank under the biologist’s watch. The animal’s attributes – intelligence, fluidity, ambiguity, etc. – have obvious symbolic meaning not only within this particular chapter but the collection as a whole; similarly with the other animals that figure into Rose’s narratives.

The Octopus Has Three Hearts was longlisted for the Scotiabank Giller Prize, and Rose is no stranger to awards and recognition for her writing. She is the poet laureate emerita of Vancouver for good reason. She writes with succinct and oft-times detailed brutality, with touches of dark humour, and with much insight into humanity. Elements of her characters – whether they be ex-cons, cheating spouses, or people who just made a terrible mistake – are within all of us to some degree and our world would probably be a better place if we confronted these aspects of ourselves, instead of burying them or pretending they don’t exist.

Similar themes appear in The Sleep of Apples, a more overtly Jewish compilation. Rather than animals linking the chapters, the people are related or connected in some way to one another. Miri’s Bubbe Zelda dies in the first story and, right away, loss, guilt, love, identity, tradition – throughout the book, no matter the characters’ gender, sexuality, age, upbringing, relationship and friendship choices, career path, they must deal with these and other basic elements of existence. Death is always present. But so, too, is the will to live, to forgive, and to care for oneself and for others.

It is interesting to think of the creative process and how people come up with stories that are out of the ordinary yet resonate. Some of the language and situations in these short stories will shock and discomfort readers. Many of the characters will not resemble people most of us regularly encounter. But, ideally, if we’re willing, they will open our minds in a way that will help us navigate the real world more thoughtfully and with more compassion.

The Cherie Smith JCC Jewish Book Festival is online only this year. For the full lineup of authors, visit jccgv.com/jewish-book-festival.

“We look forward to welcoming our live audiences to the joyful experience of a shared literary event,” said festival director Dana Camil Hewitt. “The Jewish Book Festival strives to reflect and showcase recent literature that revels in the lively and pivotal ideas stemming from the modern world and, in the process, expose our city and community to meaningful and captivating conversations about the written word in every shape and form.

“And, while the nucleus of our festival is Jewish-themed, our speakers, events and audience happily represent a diversity of experiences and cultures that defy narrow categorization. We are attuned to timely and universal themes and we thrive on the interdisciplinary, always inviting visual arts and performance art into our events.”

Opening the festival are American novelist and journalist Dara Horn, with her book People Love Dead Jews: Reports from a Haunted Present, and British comedian and writer David Baddiel, with his book Jews Don’t Count. On the closing night, Daniel Sokatch, an expert who understands both sides of the Israeli-Palestianian conflict, will present his book Can We Talk About Israel? A Guide for the Curious, Confused and Conflicted.

Winner of the Canadian Jewish Literary Award for fiction Gary Barwin joins the festival with Nothing the Same, Everything Haunted: The Ballad of Motl the Cowboy, together with U.S. author Jai Chakrabarti, who brings A Play for the End of the World.

Short stories will be celebrated in an event with Vancouver’s Rachel Rose and her collection The Octopus Has Three Hearts, long-listed for the Scotiabank Giller Prize, together with Montreal’s Ami Sands Brodoff presenting her intricately linked stories in The Sleep of Apples. From Toronto, novelist and cultural critic Hal Niedzviecki discusses his latest novel, The Lost Expert.

Stories of artists in the Second World War era are presented by two U.S. writers: Meg Waite Clayton (The Postmistress of Paris) and painter/writer Michaela Carter (Leonora in the Morning Light). History also has an important place in the work of Leah Garrett, who presents X-Troop: The Secret Jewish Commandos of World War II (who were the inspiration for Quentin Tarantino’s Inglourious Basterds), and Menachem Kaiser, whose Plunder: A Memoir of Family Property and Nazi Treasure won the Canadian Jewish Literary Award for non-fiction.

The annual Book Clubs event features Australian author Heather Morris, with her novel Three Sisters, the last in the Tattooist of Auschwitz trilogy.

Among the B.C. authors represented are Isa Milman, with her memoir Afterlight: In Search of Poetry, History and Home, and Rachel Mines, with her translation of Jonah Rosenfeld’s The Rivals and Other Stories. An epilogue event (i.e. after the festival run) moderated by Yosef Wosk features Robert Krell and his memoir Sounds from Silence and Alan Twigg’s Out Of Hiding: Holocaust Literature of British Columbia.

Regular updates can be found at jccgv.com/jewish-book-festival, where the digital program guide will be available after Dec. 28.