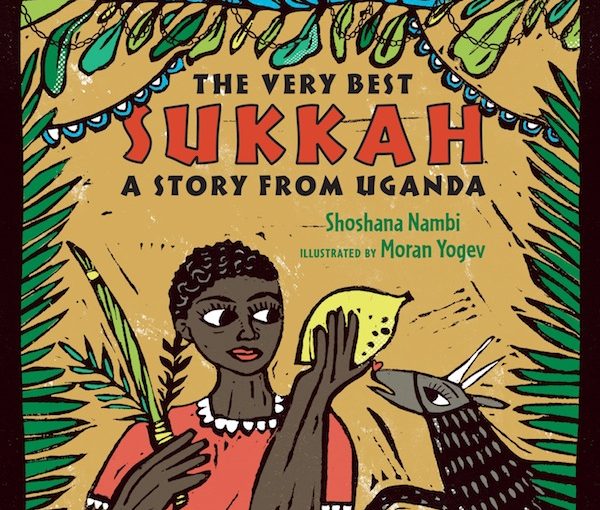 On the face of it, The Very Best Sukkah: A Story From Uganda by Shoshana Nambi and illustrator Moran Yogev may not seem to have much in common with Mendel’s Hanukkah Mess Up by Chana and Larry Stiefel and illustrator Daphna Awadish. But both charming publications explore the themes of inclusion via the experiences of their youthful protagonists.

The Very Best Sukkah centres around Shoshi, who likes to win any challenge, even when there’s none put forward. For example, despite her brother Avram’s plea for her to wait up, she makes sure to beat the other children to school – again. Shoshi shares, “My grandmother is always reminding me that life is not a competition. ‘Jajja,’ I tell her, ‘it’s not like I always have to win the race. I just like being at the front. The view is better there!’”

Shoshi and her brothers live with their “grandparents in a little house surrounded by coffee trees in the Abayudaya Jewish community of Uganda.” Shoshi races home on Friday nights to help her jajja make the holiday meal, in particular the kalo bread – it’s her job to mix the cassava and millet flour for the dough. The family then walks to synagogue, where the rabbi reminds the kids that their favourite holiday is coming up: Sukkot. The siblings start planning how they will make the best sukkah in the village.

Every family’s sukkah is different, “and each one reflects its builder’s special skills and talents.” For the most part, the differences are respected, but there is jealousy that Daudi, who sells samosas in the village, has enough money saved to buy “fancy battery-operated lights and elegant crochet trim in the big town of Mbale to decorate his sukkah.”

Life has a way of making playing fields level, however, and unfortunate weather one night causes mayhem, even for Daudi and his daughter, especially for Daudi, whose sukkah is destroyed. But the villagers rally around him and, in the end, the most beautiful sukkah is the one to which everyone contributes. A wonderful message, well delivered and boldly and colourfully drawn.

The Very Best Sukkah has a page about the Abayudaya, a glossary of terms and the lyrics of “Hinei Ma Tov” in Hebrew, Luganda and English: “See how good and pleasant it is for brothers and sisters to sit down together.” 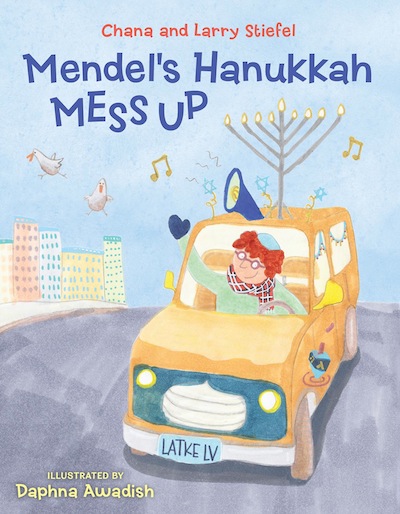 Mendel’s Hanukkah Mess Up also features something getting wrecked. In this story, it’s a crashed-up Mitzvah Mobile rather than windblown sukkot. And, whereas it’s nature that destroys Daudi’s sukkah, it’s Mendel who doesn’t notice the bridge that’s so low as to crumple the large chanukiyah on the Mitzvah Mobile’s roof.

Anyone who knew Mendel could have predicted such an outcome when the rabbi asked him to drive the vehicle, as Mendel has a long history of mishaps, including having accidentally left a tray of jelly doughnuts on the rabbi’s chair. “Splat! ‘Oy, Mendel.’”

The unique nature of the vehicle and the accident draw a TV news team to the scene.

“‘Um, well…’ Mendel’s words mushed like applesauce. ‘I blew it again,’ he sighed.

“Then Mendel thought of the lessons Rabbi Klein taught him. He stood up taller, like the shamash – the special Hanukkah candle that lights all of the others.

“As Mendel faced the camera, his words began to flow like silky sour cream.

“‘Hanukkah shows us the power of every person to make a difference. To rise up like the Jewish soldier Judah Maccabee fighting the mighty Greeks,’” he told Rachel. ‘If a tiny flask of oil can light up a menorah for eight days, we each have a spark to light up the world.’”

Mendel manages to turn his mistake into a win – spreading the story and joy of Hanukkah. It’s a fun story, with illustrations that are imaginative, engaging and detailed.

Mendel’s Hanukkah Mess Up ends with the story of Hanukkah and a glossary, instructions on how to play dreidel, the words to “Oh, Hanukkah” and a recipe for potato latkes, meant to be used by the young readers and their chosen adult.

For more information on these and other books, visit kalaniotbooks.com. 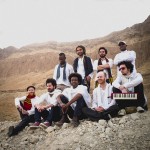 Zvuloon Dub System is at the Imperial on Feb. 20, the first of several world-class musicians taking part in this year’s Chutzpah! festival. (photo by Naom Chojnowski)

“Come prepared to dance!” advises the Chutzpah! promotional material about Zvuloon Dub System’s upcoming show at the Imperial. Wise words, indeed. Just listen to a few bars of any song and you will find yourself moving to the beat.

Founded in 2006 by brothers Asaf and Ilan Smilan, the Tel Aviv-based band is part of an impressive world music lineup at this year’s Chutzpah! As part of its series on the festival this month, the Jewish Independent spoke with Asaf Smilan about ZDS’s evolution into an internationally known reggae group.

JI: How did you come together as the current incarnation of the band, and who will be coming to Vancouver?

AS: ZDS is a little bit like a sports team. We have an extended lineup with sub musicians, and when we go on tour, we need to do some personnel changes in some of the positions from time to time.

The core lineup of ZDS has included eight musicians since 2010. When we recorded our latest album, Anbessa Dub, we brought more musicians to the studio to achieve a certain sound. When we released the album, we wanted to credit all the musicians that took part in the production of the album – the sub musicians that play with us – so we credit all of them on our website.

We’ll come to Vancouver with eight members: Gili Yalo on vocals, Inon Peretz on trumpet, Idan Salomon on saxophone, Ilan Smilan and Simon Nahum on guitars, Lior Romano on organ, Tal Markus on bass and me on drums. This is the same lineup that will play tonight [Jan. 22] in Tel-Aviv.

JI: Is there something about the tribe of Zvuloon that inspired you to choose the name for your band?

AS: Back in 2006 when we start to play together, I used to live on Zvuloon Street in Tel Aviv. We used to rehearse in my apartment and we were surprised to see that many neighbors really liked what they heard. One couple from the other side of the street used to go out to the balcony to listen, another neighbor from our building used to come down to our apartment and sit with us, the man from the grocery shop on the corner brought us Arabic coffee and cookies. We felt strong vibes from that place. So, when we thought about a name for the band, we wanted to capture that special vibe in the name of the band and, because we’re playing roots reggae that relates to Rasta (that relates to the 12 tribes of Israel), we felt that Zvuloon was the right name for us.

JI: Have the reactions to your music differed between Jewish and mainstream audiences? Have you played in the Caribbean and/or in Ethiopia? If so, what was the experience like? If not, any plans to do so?

AS: There are small differences, but basically it’s the same reaction. Sometimes we’re playing in front of a mixed audience of Jewish people, Caribbean people, Ethiopians and mainstream audiences and our music can speak to all of them. This is the beauty of music, the power to touch the hearts of many people no matter where they’re coming from.

When we played last summer in Jamaica, we sang mostly in Amharic. The Jamaican people were really curious to hear how reggae mixed with Ethiopian music, so after we played at Reggae Sumfest in Montego Bay, we got an invitation to come to play in Kingston at the Haile Selassie birthday celebrations organized by the Rasta people.

In Israel, we’re playing many times in front of Ethiopian and non-Ethiopian audiences and we can feel how the music brings people together and how people from different backgrounds can enjoy and dance together to our music.

When people who were not familiar with Ethiopian culture come to me after the show and ask me where they can hear more Ethiopian music, I get the feeling that we’re really doing something important that opens the minds and the hearts of the people.

JI: On Anbessa Dub, there are Ethiopian songs done in ZDS style. Can you talk about adapting them for this album?

AS: I started to listen to Ethiopian music in the early 2000s, a long time before we started to work on Anbessa Dub. After Gili joined the band in 2010, we started to know each other and, one day, we were sitting together and listening to music. I asked Gili if he knew a song in Amharic that I really liked. From that conversation, we started to think maybe we could play this song in the band in our version. A week later, I brought the arrangement to the band rehearsal and everybody really liked the new song, [as did] our audiences. Slowly, we added more Ethiopian songs to our set until we came up with the Anbessa Dub album.

During the work on the album, we developed a unique way to translate the Ethiopian music, which is based on 6/8 rhythms, into a reggae beat in 4/4, so the tempo of the song isn’t changing but the whole feeling is extremely different. When we worked on some of the songs with Ethiopian artists who knew the original versions, it took them some time to understand what we’d done to the songs.

JI: Freedom Time features English lyrics and Anbessa Dub songs in Ethiopian languages. Any plans to do a Hebrew album?

AS: Lately, I have found myself exploring the influences of biblical text on Jamaican reggae so maybe we’ll do something with that in the future. Last year, we released “Manginah,” our first single in Hebrew, so I believe that some day in the future we’ll come up with a Hebrew album.

JI: Who did the cover art of King Solomon and the Queen of Sheba for Anbessa Dub?

AS: The beautiful artwork featuring King Solomon and the Queen of Sheba was done by Moran Yogev, a very talented young Israeli artist.

I saw some of Moran’s works that combined elements of Ethiopian art in the newspaper and I felt that she could bring the right appearance to the album. I was very happy when she told me that she loves our music and would be happy to design our album.

JI: What’s the Tel Aviv music scene like these days? In what kinds of venues do you usually play?

AS: Tel Aviv is a small city but the music scene is quite big. You’ll find many talented musicians playing all kinds of musical genres, from Middle Eastern to jazz, from Ethiopian music to rock and roll and electronic music.

We’re playing in many venues, like the Barbie Club, Hangar 11, Levontin 7, the Zone and many other venues in the city.

JI: Are there any musicians, Israeli or not, with whom you would like to work?

JI: What’s next for ZDS?

AS: I hope we’ll continue to move forward, to create more music, to tour as much as possible and to collaborate with more musicians and, by doing so, to develop our unique sound.

AS: I invite each one of you personally to come to our show in Vancouver and to discover something new, music that unites people and cultures into a groovy soundtrack.