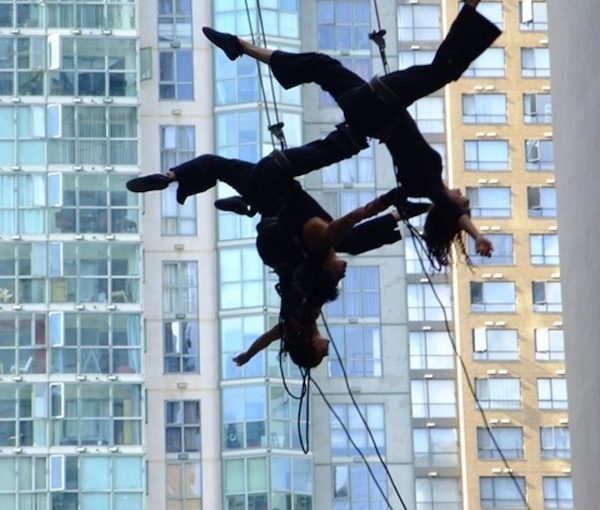 Highlights of the Scotiabank Dance Centre’s 20th anniversary celebration include a performance on the outside wall of the building by aerial dance company Aeriosa. (photo by Louise Cecil)

Scotiabank Dance Centre celebrates its 20th anniversary on Oct. 2 with a special edition of its annual open house. Highlights include a performance on the outside wall of the building by dance company Aeriosa; a creative activation of the Granville Street frontage by Company 605 and guests; free classes, events and exhibits; and the online première of a short film by Milos Jakovic and Hossein Fani.

“The Scotiabank Dance Centre is an important and colourful feather in Vancouver’s cultural cap,” said Jewish community member Linda Blankstein, a former Dance Centre board chair and current Dance Foundation board chair. The facility was built “specifically for dance in all its creative forms, from hip hop to ballet and flamenco to contemporary and everything in between,” she said. “Pre-COVID, the building would see approximately 87,000 people pass through its front door every year. It is extremely important for people of all ages, from toddlers to seniors, and amateur to professional dancers, to have a facility where creativity is shared while nurturing a sense of belonging for individuals seeking activity and connection.”

One of the centre’s studios is named after another Jewish community member, Judith Marcuse, who has had her offices and rehearsal space in the building since its inception.

Some of the highlights of the open house – for which all recommended COVID-19 protocols will be in place – include Aeriosa’s Home/Domicile, choreographed by Julia Taffe in collaboration with visual artists Sarah E. Fuller and Stuart Ward. This new aerial dance work is inspired by moths, and the dancers, wearing “moth” cloaks designed by Fuller, will perform on the north wall.

Company 605’s SPLAY comprises a special program of artists who will animate various spaces of the Scotiabank Dance Centre building. Each artist will create encounters for viewers inside and outside, making their process and practice visible, culminating in a sharing of intimate performance experiences across a variety of formats.

There will also be a performance of excerpts of new works in progress from artists Sujit Vaidya, an exponent of Bharatanatyam (a form of Indian classical dance), and Dumb Instrument Dance. Classes include tap and footwork with Danny Nielsen and Shay Kuebler; flamenco with Kasandra “La China” of Al Mozaico Flamenco Dance Academy; hip hop, breaking, waacking and contemporary with Cristina Bucci of OURO Collective; and AfroBeats with AKS Bison.

The documentary by Jakovic and Fani – which has the working title of Our Dance – will also be screened. It captures the impact Scotiabank Dance Centre has had on the dance community over the 20 years of its existence.

“It has been immensely rewarding to see how Scotiabank Dance Centre, which began as a dream so many years ago, has contributed to the arts scene in our city and the growth of B.C.’s dance community,” said Mirna Zagar, executive director of the Dance Centre, which operates the building and runs programming. “As hub for dance, it provides high-quality studio space, but it is much more than just a building: we have nurtured a stimulating environment that is supportive of the creative potential of dance artists, contributing to a thriving synergy within the arts sector in Canada.”