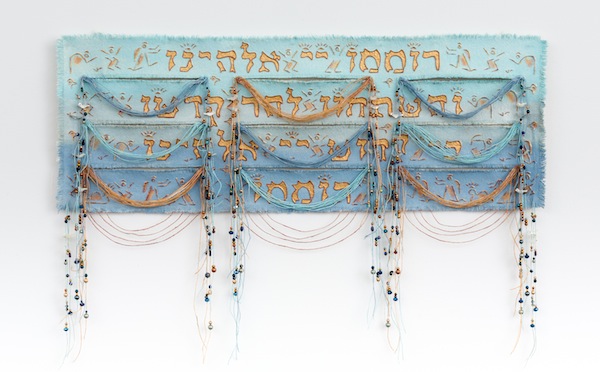 Laurie Wohl’s “unweavings” are currently on display at the Zack Gallery, until Nov. 8. The exhibit, Journeys, features two of the New York artist’s collections: the Shabbat Project and the Meditation Project.

“By unweaving the fabric, I make manifest what is hidden within the material – liberating the threads to create shape, then ‘reweaving’ through colour, texture and text,” says Wohl in her artist’s statement.

“My unweavings process came out of my concern with narrative and storytelling,” she told the Independent. “I began as a painter on stretched canvas over 30 years ago, but I came to feel that painting on a flat, rigid surface felt static – distancing me from my materials and my stories. So, I began experimenting, cautiously making slits into the canvas, then unweaving, thread by thread – engaging with the material, exploring it. My work became completely ‘unstrung’ by 1989.

“Unweaving became a meditative process that allows me to feel my way into the material at the same time that I am feeling my way into the spiritual texts that have caught my attention,” she said. “Liberating the threads – creating different forms physically – has given specific resonance to the biblical, spiritual and poetic texts that fascinate me. Both the words within each piece and the unwoven form suggesting these words serve as a visual commentary, a visual midrash. This process of unweaving, then reweaving with text, paint, texture and beads, becomes a modern interpretation of the narrative and ritual function of textiles.”

Wohl’s maternal grandfather was an Orthodox rabbi – “I was very close to him, going to Shabbat morning services with him, sitting with him in the intense quiet of a Saturday afternoon twilight, at the waning of Shabbat,” she said.

“I was raised in the questioning tradition of Reform Judaism and I have read widely in the faith traditions of Christian and Eastern religions,” she continued. “My work has grown out of my own search for meaning – what is important to me as an artist in our complex world – and from my exploration of a medium that’s congenial to this meaning. The events of our time and my own life experiences have captured my imagination, and led me to be concerned with possibilities for reconciliation, both political and religious – in post-apartheid South Africa, in Christian-Jewish relations and, after Sept. 11, 2001, in possibilities for interfaith conversations among Jews, Christians and Muslims.”

Wohl uses a heavy cotton canvas for her works. She describes her creative process on her website: “I first release either the warp or weft threads to create the desired shape. Various textures may be collaged onto the surface, such as fibrous papers, sand and pumice. My images and calligraphy are applied with modeling paste. I then apply acrylic paints to the surface, and a final thin layer of gold wash. Where gauze is used, the fabric is dipped in diluted paint, then hand-painted and embellished with fibrous papers. In the last part of the process, beads – prayers and marking points – are affixed with acrylic gel.”

Wohl’s textiles are held in numerous public and private collections, including the Museum of Arts and Design, and some of her pieces have been on long-term loan to U.S. embassies in several countries. Her works are recognized by the American Institute of Architects’ Interfaith Forum on Religion, Art and Architecture, and by the Surface Design Association, and she has exhibited in widely differing venues, from Jewish community centre galleries to university galleries to galleries in theological seminaries.

“One of the exhibits in a Christian theological seminary led to a feature on my work in a magazine, Christianity and the Arts, which led to my work being exhibited in a major church in Chicago – Fourth Presbyterian Church,” she said. “This led to a commissioning by the church of 12 pieces for their sanctuary. And that led to another commission in New York City by Madison Avenue Presbyterian Church.

“The pieces I made for these sanctuaries are my responses to the particular interfaith work of those communities and their Old Testament roots. The Psalms Project for Fourth Presbyterian’s main sanctuary consists of 12 large pieces…. The church asked me to use Hebrew as well as English calligraphy to underscore the congregation’s immersion in its Old Testament roots, and the psalmic motif emphasizes the Christian-Jewish dialogue to which that church is committed. The project for Madison Avenue Presbyterian Church uses texts from both Old and New Testaments, and Hebrew, English and Greek calligraphy.

“Between 2001 and 2010, as I was working on projects exploring the relationship of Christianity and Judaism, the necessity of expanding my work into the realm of Islam was percolating beneath the surface,” she said. “I had just moved to New York City when the events of Sept. 11, 2001, occurred. Experiencing the trauma and aftermath, and especially the demonizing of many Muslims, I began to think about how I, as an artist, could contribute to a better understanding among Jews, Christians and Muslims – to suggest a way that art can be used to mediate at the intersection of faith and politics. After extensive reading in medieval and contemporary spiritual texts and poetry in 2009, I began my 18-piece project – Birds of Longing: Exile and Memory – in which I explore the relationships among the three Abrahamic religions, using text, texture, colour and form. I relate spiritual and poetic texts from the Convivencia (the Spanish medieval period) to contemporary Middle Eastern poetry, particularly Israeli, Palestinian and Syrian. The pieces explore common themes of spiritual love, exile, nostalgia for Andalusia, poetry referencing Old and New Testament texts and the Qu’ran, and poetry speaking of mistrust of enemies, yearning for reconciliation.”

Wohl began the Shabbat Project after Birds of Longing, which had been an intense process. “I was somewhat exhausted spiritually – there seemed to be no end in sight to the fighting and misunderstanding in the Middle East, and xenophobia was heating up against immigrants and refugees coming to our borders,” she said. “I felt a need for spiritual renewal and turned to our tradition. The Kabbalat Shabbat service at my own synagogue – Stephen Wise Free Synagogue [SWFS] in New York City – is a wonderful blend of reflective and joyous music. Through wordless music – the niggunim – and through prayerful words set to music, we are invited to enter into the spiritual, the transcendent, both individually and in community.

“Music has long been an important part of my art practice. The pieces in the Shabbat Project embody prayers and psalms of the Kabbalat Shabbat and Shabbat morning services, both in terms of the texts inscribed and the form of each piece, which evokes – hopefully – the spiritual texts. I was fortunate to collaborate with Cantor Dan Singer at SWFS for a soundscape that is integral to and accompanies the project.”

Wohl shared the meaning behind a few of the works from the Shabbat Project. “The piece ‘Kabbalat Shabbat’ is a circular piece suspended from the ceiling,” she explained. “With this form, and using semi-transparent materials, I try to evoke the mystery and beauty of the Shabbat bridge. There are references to many prayers and melodies embedded in the piece: Y’did Nefesh, Ahavat Olam, V’al Kulam, L’chu N’ran’na.”

Another example she gave was “Hashkiveinu: Evening Prayer,” which, she said, “suggests a tallit or prayer shawl and embodies words from an ancient prayer. ‘Cause us to lie down in peace and raise us up, our Sovereign, to life renewed’: ‘Hashkiveinu, Adonai Eloheinu, l’shalom. V’haamideinu shomreinu l’chayim.’

“‘Romemu’ also echoes the form of a tallit or prayer shawl, and incorporates the praise text from Psalm 99:9: ‘Let us exalt Adonai our God  / and worship at His holy hill / for holy is Adonai, let us exalt.’ (‘Romemu Adonai Eloheinu / V’hishtachavu l’har kodsho / Ki kadosh Adonai Eloheinu, romemu.’)”

In total, 12 pieces comprise the Shabbat Project and the Meditation Project encompasses 11 pieces.

“For many years, the process of unweaving and working with spiritual texts has been a form of meditation for me,” said Wohl of the latter project. “Living in New York City at the beginning of the COVID pandemic, the incomprehensible numbers of those dying daily caused me to search for a way to find solace in a world turned upside down. Rabbi Angela Buchdahl, the senior rabbi at Central Synagogue in Manhattan, started a daily meditation practice on Zoom just then. I found comfort in her teachings and in the communal aspect of the meditation. Rabbi Buchdahl has continued the communal meditation once a week, and I have continued my meditation practice. The pieces in the Meditation Project draw on the teachings from her sessions and my responses to them. My hope is that the thoughts I held as I created the work will project a sense of mindfulness and serenity that viewers can carry with them.”