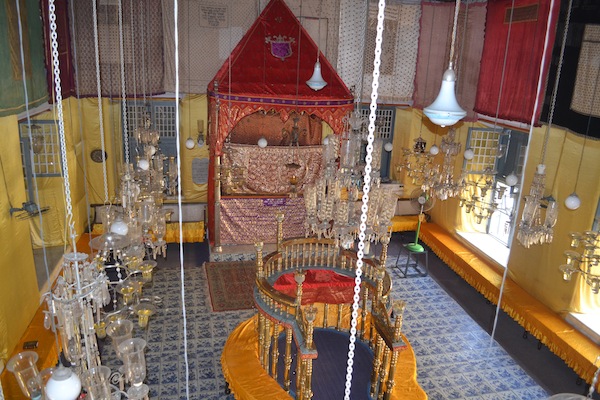 The interior of Paradesi Synagogue in Kochi, India. (photo by Lauren Kramer)

Dec. 6 marked an emotional homecoming for Canadian siblings Linda Hertzman and Kenny Salem. The pair were among some 180 Jews who returned to their birthplace in Kochi, India, to mark the 450th anniversary of the Paradesi Synagogue in the neighbourhood known as Jew Town. Three generations of families gathered from Israel, Australia, Canada and England to celebrate the milestone. They walked the ancient stone pathway of Synagogue Lane, spoke their native tongue of Malayalam and congregated in the synagogue for a festive celebration of the Jewish life that once flourished in this corner of southern India.

The festivities were tinged with sadness, however. For many, it would be their final visit to the beautiful Paradesi Synagogue. The shul is unique for its colourful oil lamps and a Torah scroll decked in a gold crown that was gifted to the community in 1802 by the maharaj of Cochin. (Kochi is the preferred term for the city formerly called Cochin.) The handpainted Chinese tiles on the synagogue floor have long since emptied of worshippers and the Jewish community of Jew Town now numbers just five – the oldest of them age 96. It’s tourists that stand beneath the oil lamps these days, visiting from dawn to dusk to marvel at the ancient Jewish history and try to comprehend its relevance. Opportunities for congregational prayer have been rare since most of the community left for other parts of the world from 1948 onwards.

On the Shabbat following the 450th anniversary, however, tourists were turned away from the Paradesi Synagogue and the sanctuary again echoed with Jewish prayer. The pews were filled with women in colourful dresses, reaching out to touch the ancient Torah scrolls as they were lifted joyfully from the aron hakodesh (holy ark) for morning prayers. Tears streamed down the faces of Jews for whom the synagogue was filled with rich memories. There were children who were seeing their families’ history for the first time and elders who were stepping into the synagogue for the last time. Adults in their 60s recalled their childhood memories of watching their parents pray in the synagogue, of riding their bicycles around the narrow roads of Mattancherry and of the warm, deeply religious and meaningful Jewish life that existed in Jew Town.

The vibrant hub of Jewish life in Kochi, Jew Town was home to three synagogues, each serving different segments of the community. The “synagogue in the middle,” with a star of David still etched in its concrete, is now a repurposed building, while the southernmost shul is a ramshackle 900-year-old structure, its rafters occupied by nesting pigeons. Indentations on the side of many of the doors of homes and businesses in Jew Town mark the spot where mezuzot used to announce a Jewish home and the large Jewish cemetery a few minutes’ walk from the shul is unlikely to be filled with many more graves as the years roll by. The Jewish life that flourished here has become a lucrative business for antique dealers and souvenir shops selling scarves and trinkets, retailers loitering outside and using all their powers of persuasion to bring shoppers in.

Hertzman, who lives in Richmond, B.C., and Salem, from Richmond Hill, Ont., were the first guests to check into what was their family home, recently transformed into a boutique hotel called A.B. Salem House. It was named for their late grandfather, Abraham Barak Salem, an attorney known as the “Jewish Gandhi” for his negotiations with Israel that enabled the Jews of Kochi to make aliyah.

Kenny Salem left Kochi at age 25 in 1987 and returns to the city annually to see his childhood friends. “It was good to have everyone back here in Jew Town,” he said. “Friends and family were walking in and out of our house all day long, just like old times, when my mother had her door open to everyone. But the sad part is that, in the aftermath of the celebrations, Jew Town is silent once again.”

There are plans to fill that silence in the near future. David Hallegua, a spokesperson for the Cochin Synagogue Trust, announced plans to build a museum dedicated to the history of the Kochi Jews in the hall above the synagogue.

“It’s a dwindling community,” admitted Salem. “So, when there are no longer any Jews living here, we will hand the management of the synagogue and cemetery over to the Archeological Department of India. We need to tell the story of the Jewish community that once lived here and pass on this message to future generations.”