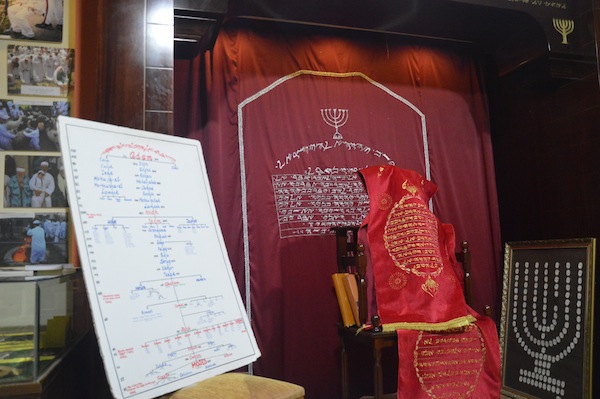 Inside the Samaritan Museum. (photo by Barry Kaplan)

It was one of the worst winter days I could remember – freezing temperatures, high winds and streets turned into rivers from the rain. Our friend, the pastor of the Jerusalem Baptist Church, had invited us to come on their church trip to Judea-Samaria.

Judea-Samaria is the area on the west bank of the Jordan River, approximately 30 miles wide, 70 miles long, not quite 2,000 square miles in area. Judea was the southern kingdom of the country with Jerusalem as its capital, and Samaria was the capital of the northern kingdom. To call this area Judea-Samaria makes clear the Jewish biblical and historical connection, but it is contentious. However, the other term for this area, the West Bank, is also a matter of contention, as that description negates the Jewish connection.

In 1922, 80% of the area of Palestine, as defined by the League of Nations (predecessor to the United Nations), was removed and became Transjordan, which was occupied then by Bedouin. During the British Mandate (1922-1948), Judea-Samaria was an integral part of the Jewish homeland and described by the British as Judea-Samaria.

In 1946, the British granted independence to Transjordan and Abdullah bin Al-Hussein was crowned king.

Jordan occupied the west bank of the river until 1950, when it annexed it to the Hashemite Kingdom. King Abdullah named it the West Bank and ruled over the area from 1950 to 1967.

Our first stop was Jacob’s Well, which is in St. Photini Church in Nablus, or Shechem. Jewish, Samaritan, Christian and Muslim traditions all associate Jacob with a well, which lies within the monastery complex of the Greek Orthodox Church. The well is not specifically mentioned in the Hebrew Bible, but Genesis 33:18-20 states that, when Jacob returned to Shechem from Paddan Aram, he camped “before” the city, bought the land on which he pitched his tent and erected an altar. Biblical scholars contend that the plot of land is where the well was constructed.

Today, Jacob’s Well is about 250 feet from the archeological ruins of ancient Shechem, which has a long history in Jewish tradition and was the first capital of the northern kingdom of Israel.

The well has been venerated by Christian pilgrims since the early fourth century CE. In the Greek Orthodox tradition, a Samaritan woman’s story at Jacob’s Well with Jesus was so powerful that many listeners became followers of Jesus, including her five sisters and two sons. The disciples heard of her experience with Jesus and came to baptize her, giving her the name Photini, meaning, “Enlightened One.” Thus, the name of the church in Nablus.

Abuna Ioustinos, a Greek Orthodox priest in Nablus, spearheaded the reconstruction project that saw Jacob’s Well restored and a new church built within the grounds of the Bir Ya’qub monastery, modeled on the designs of the Crusader-era church. Visitors access the well by entering the church and descending the stairs to the crypt.

Joseph’s Tomb is located just north of Jacob’s Well in an Ottoman-era building marked by a white dome. We could go inside the gate but no further. The tomb lies inside Area A of the West Bank, which is officially under Palestinian Authority control and the Israel Defence Forces bars Israeli citizens from entering the area without prior authorization. The site is venerated by Jews, Christians and Muslims, and has often been a flashpoint for violence. Jewish pilgrims are usually only allowed to visit the tomb once a month under heavy armed guard.

There is one synagogue in downtown Nablus, two on Mount Gerizim and two in Holon.

Arriving on Mount Gerizim, our bus drove around Kiryat Luza, a village on the mountain ridge where Samaritans live. Mount Gerizim forms the southern side of the valley in which Shechem is located. On the northern side is Mount Ebal.

We stopped at the Samaritan Museum, where the grandson of the high priest and another young woman explained their history before the current high priest – the 137th generation – came to talk to us.

In 721 BCE, the Assyrians invaded, destroyed and exiled the population of the Northern Kingdom. Samaritans believe that those who remained are descendants of the original Israelites. However, when the Jews returned from exile in Babylon, they did not accept the Samaritans, so the Samaritans separated and settled near Mount Gerizim, which they believe G-d chose as his only holy place.

Samaritans say they are descendants of the Northern Kingdom’s tribes, while rabbinical sources regard them as descendants of the Assyrian colonizers who converted to Judaism. Either way, their name, Shomronim, comes from the Hebrew word shomrim, “keepers of the law.”

Today, Samaritans number about 800, half living in Kiryat Luza, half in the Neveh Marque neighbourhood of Holon, a suburb of Tel Aviv. All Samaritans are citizens of the state of Israel, and those in Holon serve in the IDF and speak Hebrew as their main language.

Shechem is mentioned in the Book of Genesis after Abraham arrives and offers a sacrifice to G-d at Alon Moreh. Jacob then came, pitched his tent and bought the land here, and Joshua made it a city of refuge. The bones of Joseph were brought here from Egypt for burial.

The three holiest places to Samaritans are where Abraham took Isaac to be sacrificed, where Joshua placed 12 stones when the Israelites entered Canaan and where the Israelites re-erected the Tabernacle. According to the Samaritans, these events all took place on Mount Gerizim.

Samaritans believe in G-d, Moses and the Torah, and base their traditions on the Torah. They speak ancient Hebrew; however, their mother tongue is Arabic. They practise ritual circumcision. They observe dietary laws. They can marry non-Samaritan women who convert, provided they are virgins when they marry. They observe biblical holidays but not post-biblical holidays, such as Purim or Chanukah. They await the Messiah.

Our trip winds up

Our adventure ended in a church in Taybeh for lunch, where we arrived cold and wet. Due to a power outage, caused by the rain, a long grill with burning charcoal was brought out so that we could warm our hands. Taybeh is the last all-Christian community in the West Bank and the home of Taybeh Brewery, one of the few breweries in Palestine.

We returned to Jerusalem around 6 p.m.

Hopefully, another trip to Shechem will take place in the spring, after the rains end.

Sybil Kaplan is a journalist, lecturer, book reviewer and food writer. She created and leads the weekly English-language Shuk Walks in Machane Yehuda, she has compiled and edited nine kosher cookbooks, and is the author of Witness to History: Ten Years as a Woman Journalist in Israel. She also writes stories about kosher restaurants on janglo.net for which her husband, Barry Kaplan photographs. 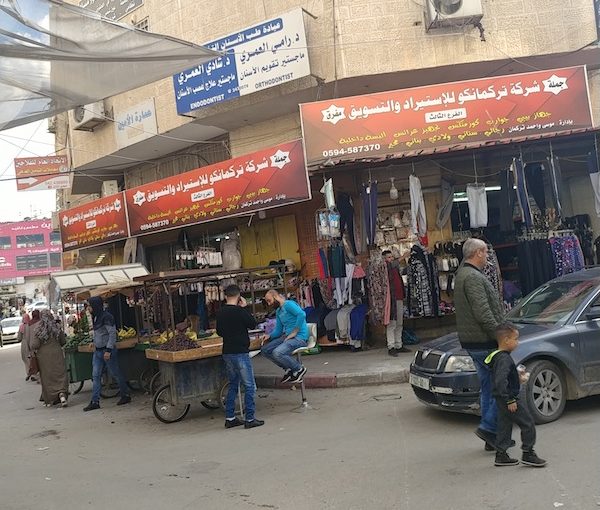