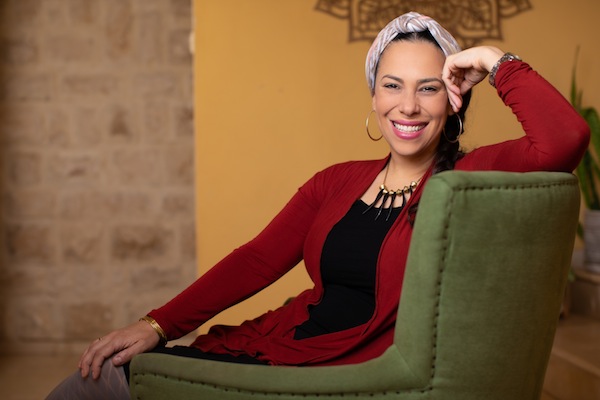 Yael Eckstein, president and chief executive officer of the International Fellowship of Christians and Jews. (photo from IFCJ)

Twice a year, the president and chief executive officer of the International Fellowship of Christians and Jews, Yael Eckstein, heads into Ukraine’s rural districts to visit elderly Holocaust survivors. Eckstein says she prefers to make the three-hour flight to Kyiv from her office in Jerusalem in the winter, when the temperatures in Ukraine have often plummeted, and country roads to small, out-of-the-way villages are overgrown with ice and snow and almost impassable. She knows that’s when these Jews, most of whom are in their 80s and 90s now, will need help most: when the summer’s vegetable harvest is almost gone and there’s no money by which to purchase food, when “it’s freezing, so freezing you can’t feel your fingers and there’s no heat” because there’s also no electricity.

For 18 years, Eckstein has been making this trek to connect with Ukraine’s most vulnerable Jews, those who survived the pogroms and Nazi exterminations in the 1930s and ’40s and are distrustful of their neighbours, so have lived self-sufficiently for decades. For many of these residents, Eckstein said, maintaining formal connections with local Jewish communities is viewed as a risk. “They don’t want to be on any lists of the Jewish community or of the synagogue, because they were the lists that Ukrainians used in order to find the Jews and kill them [during the Holocaust].” And so, for decades, they have done their best to live on what they can grow and preserve themselves.

“That’s a lot of hard, physical labour and work. When they get to 80 or 90 years old, suddenly they can’t do that any more. They can’t go chop wood [for their wood-burning stoves]. They can’t grow the vegetables,” said Eckstein. And they can’t haul enough water from the well ahead of winter to store in their kitchens when it’s icy, “so it leaves them literally starving, without heat and water.”

This past winter, those needs became even more pressing. The IFCJ was already networking with the country’s many small Jewish communities when Russia began amassing its forces at the Ukrainian border. About 200,000 Jews in the former Soviet Union were receiving humanitarian aid, including life-saving aliyah to Israel. A war could further jeopardize Ukraine’s most vulnerable residents.

“Around four days before the war broke out in Ukraine, I flew into Kyiv and assessed the needs on the ground,” said Eckstein. “When I got back [to Israel] the first thing I did was [give] a $1 million emergency preparedness grant to Jewish communities across Ukraine.” She urged them to use the money to buy canned food, mattresses and other emergency supplies in case war broke out. Eckstein said they also connected with major charities in Ukraine, to formulate a broader plan for helping Jewish refugees displaced by the conflict.

As a Jewish philanthropy organization whose success is largely driven by Christian donors, the IFCJ holds a unique role in garnering support for Israel and Jewish causes. It remains one of the largest pro-Israel charities in the world and its data show that it has raised more than $2.6 billion US for Israeli and Jewish causes since its inception in 1983. Since this February, the organization has contributed more than $6 million in aid to Ukrainian Jewish communities, with $1.5 million coming through its Canadian affiliate, the IFCJ Canada.

When it comes to raising funds and support for aliyah, the IFCJ is a powerhouse. In 2021, it brought more than 5,500 olim (immigrants) to Israel. Another 4,000 were resettled this year, including 38 Holocaust survivors who got to Moldova on stretchers. The cost of the transportation to Israel and medical treatment were paid for by the IFCJ, “but the second they landed in Israel, the Israeli government took full responsibility,” said Eckstein.

But, as stated, aliyah isn’t the only way that the IFCJ has provided aid to Ukrainian Jews. In February, the Moldovan government opened its airspace so that the IFCJ could land a plane carrying 15 tons of supplies for Ukrainian refugees displaced by the conflict.

“We off-loaded the 15 tons of humanitarian aid to our partners on the ground to drive it to [refugees] inside of Ukraine and then we loaded the plane with 180 Jewish refugees who were making aliyah and flew them to Israel. When we had enough olim to fill two flights, we immediately flew two flights,” Eckstein said.

Partnerships are key to the success of many of IFCJ’s programs, especially to getting food and clothing to those in need. “We gave the [Joint Distribution Committee (JDC)] and Chabad, for example, millions of dollars. The IFCJ often works with the Jewish Agency in Israel, as well. We create the criteria and the program and they are able to implement it on the ground,” explained Eckstein. “[In] areas like Moldova, when there’s no one else who is able to do it, the fellowship creates the programmatic ability and implements the life-saving plans” that are then carried out by partners.

The IFCJ (initially called the Holyland Fellowship of Christians and Jews) was launched in 1983 by Yael Eckstein’s father, the late Rabbi Yechiel Eckstein. According to the organization’s website, its mission was “to fulfil his vision of building bridges of understanding and cooperation between Christians and Jews,” a focus that was reflected in the rabbi’s writings, speeches and broadcasts. In 1990, with the collapse of the Soviet Union, the fellowship launched its On Wings of Eagles program to fund the transport of Soviet Jews to Israel.

In 2003, the fellowship’s sister organization, IFCJ Canada, was launched to connect with Canadian donors. It contributes to a variety of global humanitarian programs.

“In regard to aliyah,” said IFCJ Canada executive director Jackie Gotwalt, “we work on the ground with local partners providing support and resources for newly landed olim to help them start their new lives in the Holy Land.”

Since 2003, the Canadian organization has raised more than $120 million from its largely Christian donorship, which goes both to supporting aliyah and humanitarian aid in the former Soviet Union and other countries with at-risk Jewish populations, such as Ethiopia, Venezuela and, recently, France.

“The IFCJ focuses on support from Christian friends of the Jewish people to further efforts we support to address the humanitarian crisis in Ukraine and in bordering countries and, in particular, assist members of the Jewish community caught in this tragic conflict,” Steven Shulman said.

Shulman serves as the president and chief executive officer of Jewish Federations of Canada-UIA, which ensures direction and control of charitable funds raised by Jewish federations throughout Canada. He said the Jewish federations across Canada and IFCJ fundraise independently, though they both work with the Jewish Agency and the American JDC to further the same goals, which are to facilitate aliyah for those who request it and provide humanitarian aid to Jewish communities in the region.

Eckstein said there are many reasons why their Christian donorship contributes to the IFCJ, but at the core is a sense of obligation and a belief that they are doing their part to help Israel stay strong.

“It’s really biblical. Protestant and Evangelical Christians are mostly our donor base. What makes them unique from the other streams of Christianity is that they put a big focus on the Torah. They read the Tanach, what they call the Old Testament,” which places an emphasis on helping the Jewish people return to Israel, Eckstein explained.

“What I’ve seen in the past 18 years of working with Christian friends of Israel is they feel so lucky to be able to play a small part in both saving Jewish lives who [they feel] have been forgotten, neglected [or] persecuted by [others]. [The fact that] now, as Christians, they are able to help them, is something they feel [is] an opportunity and privilege.”