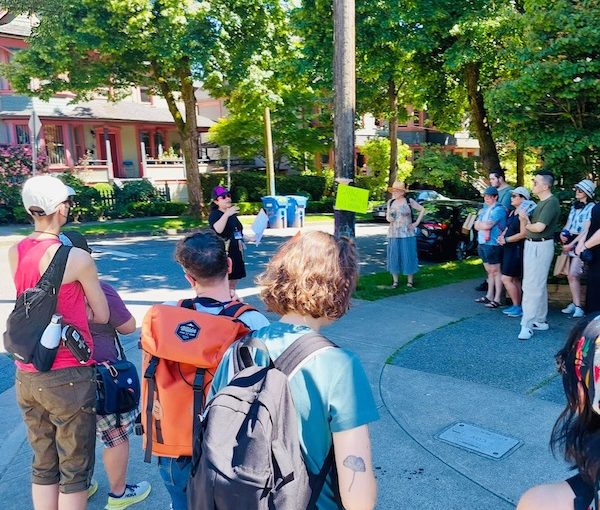 Carmel Tanaka in front of the house on Jackson Street from which National Council of Jewish Women once offered social services. (photo by Ari Fremder)

A series of Vancouver walking tours with a Jewish connection took a queer twist recently. Cross Cultural Walking Tours, which held its first tours in 2019, recently invited participants to explore the multicultural history of the city through an LGBTQ+ lens.

Two Sunday tours took place during June, international Pride Month. These included the exploration of aspects of the city’s ethnic heritages with an added layer of queer and trans history.

Carmel Tanaka is the founder and program coordinator of Cross Cultural Walking Tours (CCWT), as well as founder and executive director of JQT Vancouver, a volunteer-run Jewish queer and trans nonprofit. She is the prime mover behind the walking tours, though she has mobilized more than 40 individuals and organizations to make the series happen, including the Vancouver Heritage Foundation and the Canadian Race Relations Foundation.

“Sharing our history and stories together in one tour in Vancouver’s Downtown Eastside offers participants a tangible understanding of the importance of neighbourhood, of diversity, of our similarities and our differences, and how we live together,” Tanaka said. “The tours celebrate our cultures, but do not shy away from difficult social justice issues, and the impact of discriminatory laws at city, provincial and federal levels on our communities.”

For instance, she said, the tours address the ongoing genocide of Indigenous communities by noting the collaboration between government and churches in the residential school system, specifically the eradication of culture and language, which is one of the historical factors affecting the housing crisis in the DTES today and the opioid crisis.

At the beginning of the tour, Tanaka discussed how the Second World War brought more women into the workforce, including as cab drivers, shipbuilders and fireboat workers. A lesbian bar, called the Vanport, popped up at Main and Prior streets and lasted until 1979.

Nearby was Hogan’s Alley, Vancouver’s traditionally Black neighbourhood, which was destroyed to create the Georgia Viaduct in the 1970s. Many of the Black residents were farm labourers who came from Oklahoma via Alberta, while others were railroad porters whose jobs were tied to the nearby railway stations. The community was vibrant for six decades, producing world-class athletes, musicians, entertainers, restaurant and nightclub owners, entrepreneurs, community builders and political activists, Tanaka said.

The tour continued through the Strathcona neighbourhood, the traditional immigrant reception area for the city, and where Black, Jewish and almost every other cultural group at one point was centred. The legendary musician Jimmy Hendrix lived with his grandmother here. In the same area, the National Council of Jewish Women had a house, where they provided English literacy courses and the Well-Baby Clinic.

In the 1920s, Tanaka said, a Jewish gay man known as Uncle Max opened a shoe store on Main at Broadway before moving to South Granville. This was one of the only places in town for drag queens to purchase large-fitting shoes.

Harmony Bongat, a Filipino-Canadian, spoke of a building that housed a group of Filipino women in the early 2000s.

“It was a safe haven, a place where Filipino migrant workers (mostly working as nannies) could come if they were mistreated by their employers,” she said. “It was also a place where us Filipino queers could gather, share stories and enjoy each other’s company. Some of the people I met here would go on to create Pinoy Pride Vancouver.” Pinoy is slang for Filipino. She also discussed the history of LGBTQ+ organizing in the broader Asian-Canadian communities.

“The school first opened in 1906 in a wooden building to the left of what is here now,” Tanaka explained. “Initially, the schoolchildren attended school fulltime here, in a Japanese immersion environment. After 1919, this school became an afterschool learning program for Japanese children after they came back from a day at Lord Strathcona elementary. In 1928, funds were raised from Japanese-Canadians from all over British Columbia to build the Japanese Hall, a place for the community and to celebrate Japanese culture.”

In the spring of 1942, the Canadian government forcibly relocated Japanese Canadians at least 100 miles from the coast by enacting the War Measures Act.

“This act uprooted, displaced and dispossessed approximately 22,000 Japanese-Canadians,” said Tanaka. “My great-grandmother and her two sons were interned in Minto, and my great-grandfather, grandmother and grandfather were interned at New Denver, in the Slocan Valley. They all lived in Port Essington, near Prince Rupert, across from Haida Gwaii. Before going to the camps, they were detained in the animal livestock building of Hastings Park, aka the PNE/Playland.”

The Japanese community was able to keep the Powell Street building because it was owned by the Japanese-Canadian community, rather than an individual. The building was leased during the war and the school reopened in 1952. It has been designated heritage status, said Tanaka. “Today, the school operates a childcare centre, continues with language courses, offers rental spaces, and holds Japanese-related programs and events.”

The tour moved on to the Aoki Rooms, which was a tenement house for Japanese workers and is now known as Ross House, a residence for trans and gender-diverse people.

In Gastown, the tour touched upon the history of the Europe Hotel, with presenter Glenn Tkach of Forbidden Vancouver and creator of the Really Gay History Tour.

Tkach explained how the neighbourhood was a magnet for men from all over who were seeking work. But, while Gastown was the hub for employment, the actual work was often far away.

“Men moved from job to job and trade to trade, as fishermen, lumberjacks, sailors, rail workers,” he said. “Thousands of men, living on the road, following the work. Without a lady in sight.”

The jobs lasted from spring through fall, then places like Gastown’s Europe Hotel would fill with men returning to the city with money to spend and leisure time. A bathhouse in the hotel’s basement was popular.

“City officials did not consider it a priority to police the private habits of these working-class men,” Tkach said. “There was a huge demand for their labour. So it was best for everyone, if their activities just went unnoticed. And, for the most part, they did.”

Nearby, on the Burrard Inlet waterfront, was where a shameful part of Canadian history took place.

Karn Singh Sahota and Viplav Bhaskar from Sher Vancouver, a nonprofit society for LGBTQ+ South Asians, shared the story of the Komagata Maru. In 1914, this ship, carrying 376 passengers from India, was denied disembarkation due to racist immigration policies. After holding the passengers effectively hostage in the inlet for two months, all but 24 were forced to return to India, where 22 of them were killed.

They also shared a story of a case in which two Indo-Canadian men were entrapped by Vancouver police and beaten for alleged “sodomy,” one of many such charges of the time, especially targeting racialized working men.

The tour continued past 63 East Hastings, site of the city’s first real gay bar, the Montreal Club, which ran from the 1950s to 1969.

There is a great deal of hidden history in the city, much of which was unearthed and shared for this tour. Tanaka noted the challenges in telling the stories of marginalized communities, including Black, Indigenous and People of Colour (BIPOC).

As a self-described “Jewpanese” person, Tanaka has a unique perspective.

“I often see antisemitism forgotten in the discussion on racism, as it’s not considered a BIPOC issue,” she said. “Not too long ago, Jews were not considered white and, as a Jew of Colour, I’m living proof that not all Jews are white. So, whether it be on the walking tours or on panels, I weave in my family’s lived experiences of antisemitism and anti-Asian racism to raise awareness.”

CCWT is looking for energetic voices from the Jewish community to cover the Jewish portion of their tours. To discuss that or for more information, Tanaka can be reached at [email protected]. The group is on Facebook and Instagram.