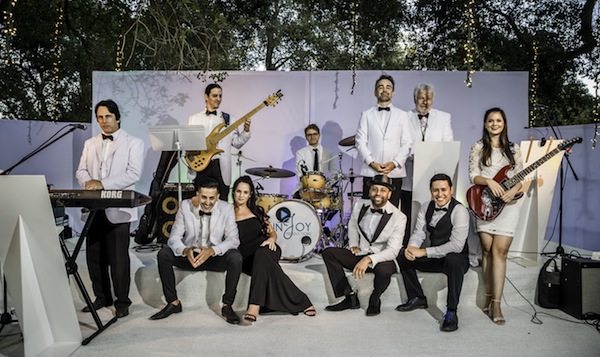 InJoy, led by Gilat Rapaport (centre), comes to Vancouver for the community’s Yom Ha’atzmaut celebration on May 4 at Vogue Theatre. (photo by Linda Kasian)

Tickets are now on sale for the community’s celebration of Israel’s 74th Independence Day. This year’s Yom Ha’atzmaut event will be held, COVID permitting, at the Vogue Theatre on May 4.

“The Yom Ha’atzmaut committee, Federation staff and I are really excited about our first large community gathering since before the pandemic,” said Pam Wolfman, chair of the committee. “This year also marks our 20th anniversary of this event, making it an extra special celebration for the whole community!”

Emcees Lu Winters, Kyle Berger and Adora Harel will guide attendees through the night’s festivities, which will include special guest performers Gilat Rapaport and the InJoy band, as well as local community dance groups, and Vancouver Talmud Torah and Richmond Jewish Day School students. Once again, a community song video will be screened – to participate, submit a video of yourself singing Jewish Federation’s version of “Salaam” by March 31. Video submissions will be edited into one that will première on May 4 at the Vogue. For details, including the audio and lyrics of the song, visit jewishvancouver.com/community-song-2022.

Rapaport was born and raised in Israel and has been performing on stages in Israel and around the world since the age of 12. After her service in the Israel Defence Forces’ entertainment groups, she moved to Los Angeles in 1998.

Rapaport began her career with classical training at the Israel Conservatory of Music in Tel Aviv and continued at the Rimon School of Music branch in Boston. She founded her company, InJoy Productions, just over 20 years ago.

Rapaport and InJoy have been touring – South America, South Africa, Australia, Europe and the United States – performing their joyful and energetic music for Jewish and non-Jewish communities around the world. For Metro Vancouver’s Yom Ha’atzmaut celebration, they will perform traditional and contemporary Jewish and Israeli repertoire, with the hope that audience members will dance and sing along.

For more information about Rapaport and InJoy, visit injoyprod.com. For tickets to the May 4 event, go to jewishvancouver.com/yh2022.