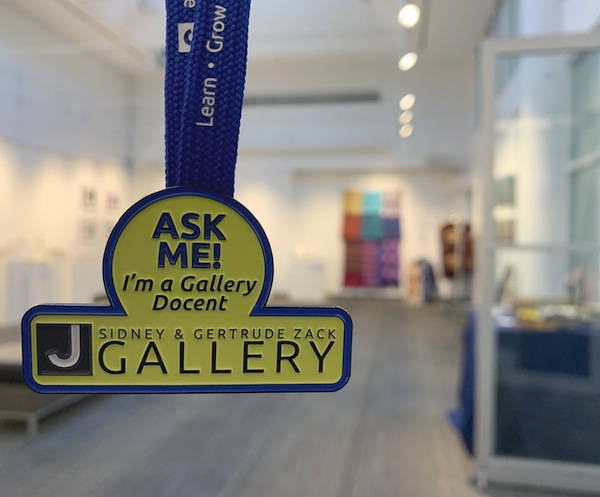 New docent program at the Zack gets underway. (photo from Zack Gallery)

“I came up with the idea of creating a group of volunteer docents for the gallery right after I got here, which means right before the pandemic,” Forstenzer told the Independent.

Unfortunately, the pandemic made it impossible to implement the idea at that time, and the initiative only became reality in the past few months.

“My job as the gallery director is only half-time,” Forstenzer said. “Even when I’m working, I’m frequently in meetings or visiting studios or doing other work that takes me away from engaging the people in the gallery. I created the docent program to make sure the gallery was staffed with friendly and available faces, with people who knew about the shows, could make sales, and could answer questions.”

Initially, about a dozen people responded to her invitation to become volunteer docents at the Zack. “Some dropped out for various reasons as we were getting underway,” she said. “Others have come along since.

Currently, we have six docents on our active roster.”

Before the docents could perform their assigned duties, they needed a certain amount of training on the gallery rules and procedures.

“The docents each attended two training sessions, both lasting about an hour,” said Forstenzer. “Sometimes, we’d do the whole training in one session, but it varied. The second training shift was usually about our sales system, which isn’t difficult, but isn’t something most of the docents have seen or used before. In the first training session, I explained what their responsibilities were, we discussed scheduling, and I’d either show them how to use our sales system or invite them back to learn it on a different day…. Then they did a shift with me in the gallery as backup. Then they were ready to go.”

The first docent started at the Zack last October. “Some of them have taken breaks due to the Omicron,” said Forstenzer, “but others have stayed throughout.”

She has lots of plans for her volunteer docents. “The primary purpose of having the docents in the gallery right now is to have a knowledgeable and friendly presence that welcomes visitors,” she said. “They can also make sales. As the restrictions due to COVID lift (hopefully), the docents will also help me run events in the gallery, both for kids and for adult groups. Eventually, I hope they’ll be able to run some of these events themselves. We might even schedule some docent-led viewings of shows.”

At the moment, most docents do one shift a week, each shift three or four hours long, but Forstenzer is flexible about that. “Some do two shifts a week. Some split their shifts and go for a swim or a workout in the middle and then come back. It is up to them, and I create a schedule based on their availability and the gallery’s needs.”

She added that all the docents take their volunteering seriously. “If someone can’t make their shift, they let me know,” she said. “If I can cover it, I will. If not, the gallery won’t have a docent that day.”

The docents vary widely in age and experience. Some are students. Others are retirees or people participating in various community centre programs. Gail Bloom shared with the Independent a bit about herself and why she became a docent at the gallery.

Bloom worked as a city planner in San Francisco. “I studied city planning in college and then worked as a practising planner,” she said. “I love cities and was interested in public utilities. My chief role for over a dozen years was sorting out public financing of major infrastructure projects in San Francisco.  It was very satisfying to see the fruition of that work across the city.”

She retired about 20 years ago. “My home is still in the Bay Area. I live there with my husband, and my son’s family also live nearby, but, last fall, I came to Vancouver for an extended winter visit with my daughter – she lives here and teaches at Emily Carr.”

Bloom, who turns 70 this month, has been volunteering in many fields since her retirement. “I lead the Board of Children’s Book Project and presently serve on a regional public health agency at the Marin/Sonoma Mosquito and Vector Control District,” she said. “I have also enjoyed working on state, local and federal election campaigns, mentoring youths, and helping with the major fundraising event for the Oakland Museum of California.”

She has always been interested in art. “I love cities, as I said, and the museums are a big part of that – especially art museums. In the last couple months, I visited the Vancouver Art Gallery and a small community gallery at the Deep Cove Cultural Centre. There is a show at the VAG now that I’d recommend – Emily Carr and Edith Heath. Heath was a local San Francisco ceramic artist; she started her iconic tile and pottery company out of her little apartment in San Francisco in the ’40s.”

Of course, when she visited the Jewish Community Centre of Greater Vancouver for the first time, the Zack Gallery attracted her. “As I’m interested in the arts personally and enjoy art museums, their new docent program seemed like a good fit,” she said. “And my family were thrilled that I found the gallery and something meaningful to do with my time. Now, I’m at the gallery every week. My docent days are Mondays.”

Besides volunteering, Bloom takes advantage of several other programs the JCC offers. “The aquatics program is pretty great,” she said. “I also attended several sessions of the book fair last month, and I just started watching VJFF [Vancouver Jewish Film Festival]. I’m fortunate to have time to participate in them all.”