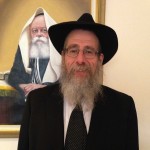 When Rabbi Zushe Silberstein heard that the Jewish inmate standing before him in a Montreal jail was due to be released in just three days, he didn’t hesitate. “My daughter is getting married this weekend,” he said. “I would be honored if you could attend the wedding.” The prisoner stared at him, certain he had misheard. A rabbi inviting a newly released prisoner to a family wedding? It seemed impossible. But in the next breath Silberstein was offering to help arrange a suit if needed.

This conversation occurred two years ago and, that weekend, the former convict did indeed attend the wedding. The encounter was nothing extraordinary for Silberstein, who heads Chabad Chabanel in Montreal and regularly visits Jewish inmates in Montreal jails. “We bring them food and sandwiches, we daven, put on tefillin with them and celebrate Jewish holidays with them,” he said. There’s a seder at Pesach, a Megilla reading on Purim, menorahs on Chanuka and services on Rosh Hashana.

“My main thrust has always been to tell these marginalized Jews, you’re not alone, you’re not forgotten, there’s someone out there who cares about you. We’re there to comfort, to advise them and to show them the Jewish community cares about them.”

Fifteen years ago, the rabbi founded Maison Belfield as a halfway house for up to six men at a time, offering newly released Jewish inmates shelter, food, clothing, therapy and reintegration assistance. Aiding Jewish prisoners is a consuming task and one he takes seriously.

“The Rebbe teaches us not to forget any Jew, no matter where she or he may be,” he explained. “If there’s a Jewish person in need, we must care for them. It’s why my children and I have more than once traveled 14 hours to help one single Jew in jail. My Shabbos table often has former inmates gathered around it.”

Over the 30 years Silberstein has been involved with Jewish chaplaincy, he’s seen all kinds of Jews behind bars, “from a prominent lawyer to children from dysfunctional homes to people with substance abuse issues and those who are highly affluent,” he said. “Nobody is immune to falling into this kind of situation.”

He refused to disclose the number of Jews presently incarcerated in Montreal, saying only “one is too many,” and that High Holy Day services and Passover seders in the jails see an attendance of up to 10.

Correctional Service Canada (CSC) revealed that as of March 31, 2014, there were 177 offenders who identified themselves as being Jewish, representing 0.8 percent of the total offender population. That was up from 159 in April 2005. CSC engages Jewish chaplains, who regularly provide religious services, religious education programs and one-on-one counseling with Jewish inmates, said Julie O’Brien, media relations advisor for CSC. “If a Jewish offender has a rabbi, the chaplain will put the two in contact.” Chaplains may approve kosher diets for inmates who require them, a religious dietary policy that was first formalized in 1992.

“Thirty years ago, the provincial government refused to allow kosher food and we had to pay $30,000 to provide it to Jewish prisoners,” recalled Silberstein. “Eventually, under threat that we’d go to the Supreme Court of Canada, the federal and provincial governments … provided that kosher food at government expense, after the minister saw that we were serious and would not give up. Today, in Quebec’s prison systems we have excellent cooperation for the needs of Jewish prisoners.”

O’Brien said the CSC ensures spiritual accommodation to assist offenders in practising their religion or spirituality as fully as they desire within the correctional setting, up to a level generally available to people in the community. The Jewish community also has representation on the interfaith committee, an advisory group on religious and spiritual practice for inmates in CSC institutions.

Funding for the visits to Jewish inmates and to support the expenses of Maison Belfield is direly needed, Silberstein said. “Prayer books cost money and so does the seder, the tefillin and the food we bring to Jewish inmates each week. Our halfway house is also an expensive proposition, with a mortgage and heating to be paid and the costs of regular living supplies in addition to food, clothing and therapy.”

When Chabad of Richmond recently replaced its High Holiday prayer books and was looking for a new home for its several hundred older versions, Rabbi Yechiel Baitelman posted on a Chabad site that he was ready to pass them on. The first request came from Rabbi Binyomin Scheiman in Illinois, founder of the Hinda Institute (formerly the Jewish Prisoners’ Assistance Foundation), which aids the families of incarcerated Jews, arranges visitations and helps with the re-entry process after they are released. “We estimate there are up to 150 Jews incarcerated in the state of Illinois and these High Holiday prayer books are so important,” he said. “For Jewish inmates, Rosh Hashana is a time in their life when they’re very open, and repenting for mistakes they’ve made in their lives. The prayer books are an extremely generous contribution.”

In general, Jewish prisoners are very marginalized within Jewish communities, sometimes even demonized, Scheiman said. “It’s even worse than being forgotten – they and their families are sometimes shunned by the community.” He works closely with the Aleph Institute, which was founded in 1983 and has branches in many different states. Its goal is to provide professional services to nearly 4,000 men and women in U.S. federal and state prisons and their approximately 25,000 spouses, children and parents.

No such organization exists in Canada, though various rabbis in different parts of the country carry out initiatives of their own. Baitelman visits the six to 12 Jewish inmates in Metro Vancouver jails from time to time and tries to send Purim packages to them. In Vancouver, semi-retired Rabbi Dina-Hasida Mercy has served as the Jewish chaplain to Pacific region federal prisons since 2012 and takes weekly excursions into the Fraser Valley to meet with the small number of Jewish inmates and any other inmates who want to talk to her. “There are definitely people in my group that are not halachically Jewish,” she said.

A basic need they all share is for a kind, listening ear, one that won’t judge them and report on them, she explained. She’s also committed to practical projects, including the delivery of donated prayer books and general Jewish literature into the federal institutions. As a woman visiting men in jail, Mercy said she’s never felt physically threatened. “The guys tend to be fairly protective of their chaplains,” she reflected. “In many ways, the prisons are far safer than the city streets because the inmates have been called to task for their offences and are monitored, whereas out in the community you have people who might still be in their crime cycle.”

There isn’t enough support and understanding for inmates in the Jewish community and the wider community in general, she said. “It’s a societal perception that bad guys are put away and should stay away, but these people need to find jobs and take a place in the community when they come out. Many have just committed incredibly stupid mistakes in judgment with terrible consequences, but they need our help to reintegrate into community.”

What’s needed, she said, is a halfway house based on Jewish values, a place that might offer a job bank, educational opportunities and perhaps even a little business. “Inmates need a way to regain their self-sufficiency. They come out of prison with $80, which is barely enough to get you from the Fraser Valley into Vancouver. As a society, we need to work on our compassion for people who want to rebuild their lives and, yes, it means doing things that are not comfortable for us.”

Rabbi Menachem Matusof, head of Chabad in Alberta, has visited Jewish inmates in Alberta jails for the past 27 years. He estimates there’s six to 12 incarcerated in his province and also finds funding a challenge. Sometimes, there are conflicts. One year, he brought a mobile sukka to the Jewish women’s jail in Calgary, where an inmate was incarcerated for murder. In an interview for the Jewish Star, Matusof was asked why he would bother doing this. “Murdering is a much bigger issue than sukka and lulav,” he was told. “My response was this: because someone committed a crime one time, this means s/he should not do another mitzvah? What does one have to do with another? The murder was being handled by the courts. Meanwhile, this is still a Jewish individual who needs help, and we’re here to help them at whichever level they need.”

Another painful instance of conflict involved a former mashgiach in Calgary who was a child molester. Prior to the man’s imprisonment, Matusof recalled being worried the man would turn up to services. “I disallowed him to come to Chabad House and told the community I would call the police in the middle of Yom Kippur if he walked into shul and even laid eyes on a child,” he said. After the man was jailed, the rabbi decided that as a community rabbi it would be best to send another rabbi to visit him.

Still, most of the Jewish inmates Matusof visits he described as “sweet, wonderful people who unfortunately got caught in bad situations. It’s not our place to judge.”

There are also schemers, and Matusof gets requests from non-Jewish inmates who want to speak about possible conversions to Judaism. He always waits until they are released from jail, “but once they’re out, they no longer have interest!” Other inmates claim they are Jewish and want kosher meals. “We talk to them and find out immediately if they’re telling the truth,” he said. “Most of the time, I’m not fooled.”

Lauren Kramer, an award-winning writer and editor, lives in Richmond, B.C. To read her work online, visit laurenkramer.net. A longer version of this article can be found at cjnews.com, where it was originally published.