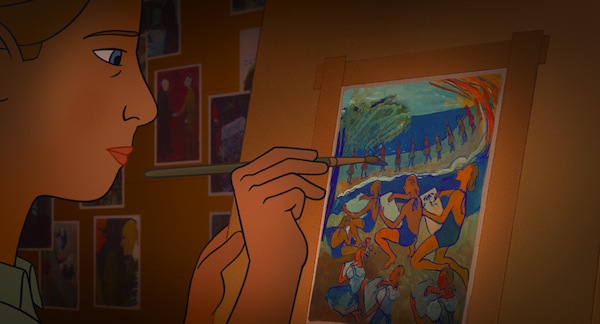 A still from the feature film Charlotte, about artist Charlotte Salomon.

The creative drive that some people have astounds me. In about a year-and-a-half, as the Holocaust closed in on her – and her family’s history of depression became known to her – Charlotte Salomon painted hundreds of works, telling her life story in images and words, in what is considered by many, apparently, as the first graphic novel.

Somehow, despite the artist having inspired a live action film, a documentary feature, an opera, a novel, a ballet and several plays, I’d never heard of her, or of her masterpiece, Life? Or Theatre? That is, until I watched the animated feature film Charlotte, a Canada-France-Belgium collaboration that was just released. Featured at the Toronto International Film Festival earlier this month, Charlotte has two screenings at the Vancouver International Film Festival: Oct. 3, 3 p.m., and Oct. 6, 9:15 p.m., at Vancouver Playhouse.

Based on the story and the cast, the Jewish Independent chose to be a media sponsor of the local screenings. And, on these points, the film scores high. Led by Oscar nominee Keira Knightley as the voice of Charlotte, the actors do a formidable job with dialogue that is, at times, stilted and animation that is pretty basic, with the exception of the scenes and transitional pieces that depict Salomon’s artwork. These parts of the film are sumptuous and give the most sense of Salomon as a person and artist.

The film begins near the end of Salomon’s life, as she is handing over her paintings to a man, who we find out later is a local doctor and friend, in what we later find out is the south of France. She asks him to guard the paintings for her, as they are her life, almost literally, given their content. The narrative then jumps to Berlin, to a young Charlotte trying to comfort a woman who is ill and sad. The woman turns out to be Charlotte’s mother, who dies, the young girl is told, of influenza.

Jumping ahead, still in Berlin, Charlotte’s father, Albert, has married Paula Lindberg, an opera singer, through whom, incidentally, a teenage Charlotte meets her first love, Alfred Wolfsohn, who is a singing teacher. He is also a veteran of the First World War.

Wolfsohn has a lot of personal issues, to say the least, and he ultimately betrays Charlotte, but he is also strongly supportive of her being an artist. While she gains entrance to Berlin’s art academy, despite being Jewish – it is 1933 and the Nazis are now in power – she is expelled pretty soon thereafter, though whether that’s because of her nonconformity to the artistic norms taught at the school, her Jewishness or both, is not clear.

What is certain is that, after Kristallnacht, the violence against Jews in Berlin has become unavoidable and Charlotte’s parents send her to the south of France to take refuge, and care for her maternal grandparents. Her grandmother is a troubled woman and her grandfather is, in a word, an asshole, but Charlotte finds beauty in her friendship with a wealthy American, Ottilie Moore, who owns a villa in Villefranche, and in her relationship with fellow refugee Alexander Nagler, whom she marries eventually.

When Moore returns to the United States, she offers to try and take Charlotte and Alexander with her, but they stay in France – Charlotte because of her sense of duty to her grandparents. It is in caring for them that she witnesses the tragedy of her grandmother’s suicide and finds out from her grandfather that mental illness runs in the family, having claimed the lives of Charlotte’s mother, aunt and several other relatives.

Spurred on by the potential that she, too, will fall ill, as well as by the Nazis’ proximity, Charlotte turns her focus to creating the almost 800 paintings that comprise Life? or Theatre? She manages to give them (and other works, it seems) to Dr. Georges Moridis, who she had consulted about her own health and who had tried to help her grandparents, before she and Alexander are seized by the Nazis. Both Charlotte and Alexander are killed at Auschwitz; Charlotte five months pregnant.

The film, which isn’t shy about showing some of the brutality of the Holocaust, does step back from showing the deaths in Auschwitz, leaving viewers instead with an image of the idyllic setting in which they lived in France, as we hear the noises of their arrest, then silence.

Before the credits, the filmmakers tell us what happened to Charlotte, Alexander and Ottolie, and show us clips of a real-life archival interview with Charlotte’s father and stepmother, who survived the Holocaust, as well as a sampling of Charlotte’s paintings.

As depressing as Charlotte’s story is, it is not a depressing movie. That she anticipated her demise and created an artistic legacy in the face of death is somehow uplifting. As producer Julia Rosenberg states in the film’s production notes, “… hope isn’t rainbows and unicorns. It’s finding the courage to see beauty despite suffering.

“Charlotte Salomon’s ability to do just that is exceptional and inspiring.”

Charlotte is a worthy introduction to a person we all should know.

For the full Vancouver International Film Festival schedule and tickets, visit viff.org. To potentially get free tickets to the Oct. 6 screening of Charlotte, email [email protected]. Tickets will be available as supplies last (there are 10 to giveaway).