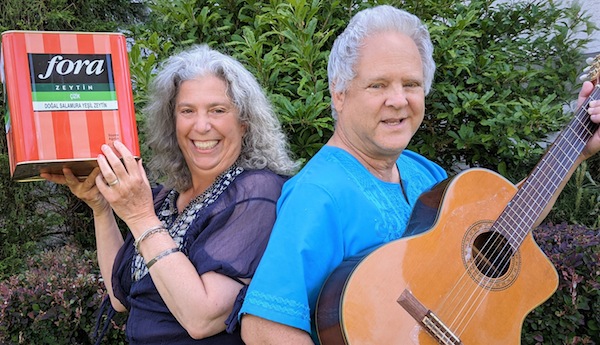 Amber Woods and Gary Cohen are the musical duo Kouskous. They were among the speakers in the six-part Journeys in Jewish Music series. (photo from Kouskous)

In ordinary times, the Victoria Jewish Community Choir meets in person at the synagogue building of Congregation Emanu-El. Unable to do so during the pandemic, the choir has instead been offering Zoom presentations on a diverse array of Jewish music.

Throughout the spring, the six-part Journeys in Jewish Music series, funded by the Jewish Federation of Victoria and Vancouver Island, has brought in an audience from around the world. It has featured talks on biblical cantillation by Vancouver’s Moshe Denburg; the songs of Sefarad, with Prof. Judith Cohen of the University of Toronto; Chassidic meditative melodies (niggunim) with Emanu-El’s Rabbi Matt Ponak; and Sing a New Song to G-d: New Prayer Compositions, with Rabbi Hanna Tiferet Siegel, who lives on Hornby Island. The last event in the series, which takes place June 20, will see Denburg return, to speak on the topic The Way of the Klezmer: Klezmer and Yiddish Song.

The Jewish Independent attended the May 23 musical voyage, which was guided by Gary Cohen and Amber Woods, who form the Victoria-based duo Kouskous. It explored Mizrahi music and how it differs from other Jewish musical styles. To demonstrate this, Cohen and Woods took the liturgical song “Lecha Dodi” and sang it with Ashkenazi, Sephardi and Mizrahi interpretations.

Following their expulsion from Spain in 1492, Sephardi Jews migrated to many countries in Europe, as well as going to North Africa, Greece, Turkey and Middle Eastern/Arabic countries. “Wherever Jews went, they blended their own musical traditions with those of the countries to which they moved. For example, the Sephardim combined their own musical style with Moroccan rhythms, Arabic instrumentation and Middle Eastern vocal expressions,” he explained.

“The Sephardim in Turkey and Greece often incorporate odd-metered rhythms such as 7/8, 9/8 in their music. In addition to traditional Arabic instruments, Greek instruments like the bouzouki were commonly used,” Cohen said.

Sephardi musicians who moved to Middle Eastern/Arabic countries were heavily influenced by Arabic musical styles, including “a wide melodic range, as well as vocal and instrumental embellishments,” he said. “Lyrics were often in Arabic, Hebrew or Judeo-Arabic.”

Throughout the presentation, Cohen and Woods performed some musical selections – including a few hot and spicy numbers – from the aforementioned genres for the assembled Zoom audience.

Carol Sokoloff, who co-directs the Victoria Jewish Community Choir with Kenny Seidman, is the person who came up with the idea for the lecture series.

“It has been so well-received it seems natural to repeat it and I hope to do that in the fall, going deeper into many of the subjects, as well as exploring new territory, such as Jewish composers of popular songs, Jewish women’s music, the music of the hidden Jews of Spain and Portugal, cantorial traditions and more,” Sokoloff told the Independent.

“Jewish music has so many flavours and is so rich and varied we have only begun to scratch the surface. Through our conversations, we are learning about other people with knowledge to share and, so far, everyone has been very generous in their enthusiasm for this series,” she said.

The shift from live venues to Zoom since the start of the pandemic has allowed the choir to expand its audience outside of Victoria.

“The series has been wonderful in that people who never knew about the Victoria Jewish Community Choir are now aware of us,” said Sokoloff, “and I believe that, when we finally can meet again to sing together, we shall likely attract many new members or new audiences for our performances and concerts. So, the series has allowed the choir to weather this challenging period and likely emerge stronger than ever! I think it has also generally increased interest in Jewish music in our region as well – all very happy outcomes.”

In non-pandemic times, the choir sings a variety of Jewish music: Psalms and prayers in Hebrew and Aramaic, niggunim, Yiddish songs, Sephardi music in Judeo-Spanish, Israeli songs, Broadway tunes, Yemenite music and contemporary compositions. For more information or to support the choir, send an email to [email protected] or visit their Facebook page, where you can also learn how to receive the link for the June 20, 7:30 p.m., talk.