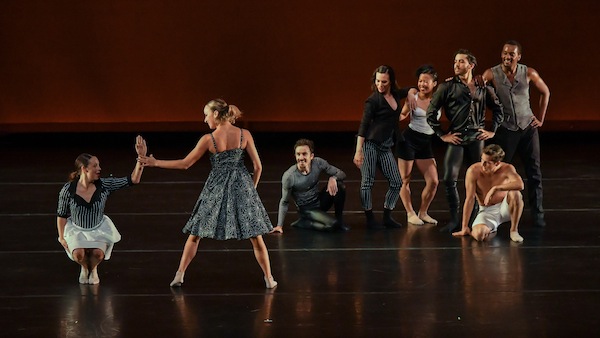 A Million Voices, choreographed by Matthew Neenan, is described as a “lighthearted and whimsical ode to Peggy Lee’s iconic jazz standards.” (photo by Rob LatourRob Latour)

Los Angeles-based BODYTRAFFIC returns to Vancouver for their DanceHouse debut, May 5-6, at the Vancouver Playhouse. The company, which is led by artistic director Tina Finkelman Berkett, will present Mixed Repertoire – A Million Voices, The One to Stay With, SNAP and PACOPEPEPLUTO.

“It is an immense privilege to present BODYTRAFFIC’s DanceHouse debut this spring, which also represents the company’s return to Vancouver since 2015,” said Jim Smith, artistic and executive director of DanceHouse, in a press release. “This is a masterful program of short works that effortlessly showcases BODYTRAFFIC’s singular ability to take on any dance genre, moving from hip hop to ballet to jazz and back again. Beautiful, virtuosic, political, and with a dash of much-needed lightness, this evening of dance will leave audiences breathless and wanting more.”

“We love coming to Vancouver,” Berkett told the Independent. “The audiences are always so welcoming and so curious. There always feels like a supportive energy for the work we are sharing. I loved that program that we offered back in 2015 [at the Chutzpah! Festival]. Typical to BODYTRAFFIC programming, it was packed full of works by choreographers who I believe in wholeheartedly.”

As for the May program, Berkett said, “The works the company will offer on May 5 and 6 showcase the versatility and virtuosity of our dancers. The program offers singular choreographic voices, some emerging and some established. Baye & Asa and Micaela Taylor are newer voices in our industry and are certainly taking the dance world by storm; I’m so excited to share their works. As always, the program will offer the audiences a chance to enjoy and be entertained.”

According to the press release, the 90-minute show will open with A Million Voices, from Matthew Neenan, which premièred in 2018. “A lighthearted and whimsical ode to Peggy Lee’s iconic jazz standards, this infectious piece featuring seven dancers reminds us that, even during our toughest moments, life is always worth enjoying.”

The One to Stay With by choreographers Baye & Asa was commissioned by BODYTRAFFIC and premièred only just last month. “Inspired by Patrick Radden Keefe’s 2021 book The Empire of Pain, about the Sackler family’s role in ‘Big Pharma’ and the current opioid epidemic,” The One to Stay With is a work for eight dancers. It “tackles ideas of power, greed and deceit, punctuated by a lively score of Russian waltzes and Romanian folk songs.”

SNAP, from Micaela Taylor, which BODYTRAFFIC premièred in 2019, features six dancers in a “hip hop-infused choreography [that] urges audiences to ‘snap out of’ pressures to conform, encouraging us to embrace the individuality of our own selves as well as those around us.”

The final piece, PACOPEPEPLUTO, by Alejandro Cerrudo, which premièred in 2011, features three male dancers, “who each perform an athletically charged solo set to a Dean Martin classic.”

BODYTRAFFIC was co-founded in 2007 by Berkett and Lillian Rose Barbeito. It is now under the sole artistic direction of Berkett, who started her career at Aszure Barton & Artists, with which she became a feature dancer, as well as Barton’s assistant and an instructor.

“I never dreamt of having a dance company,” Berkett told the Independent. “When I was a young dancer, I had a very different idea of what my future would be. I thought I’d join a repertory company – not start one! But life led me to Los Angeles and eventually to launching BODYTRAFFIC to fulfil my dreams as a dancer.”

Before moving to Los Angeles from New York and co-founding BODYTRAFFIC, Berkett was a founding member of Mikhail Baryshnikov’s Hell’s Kitchen Dance.

“Jewish values are a part of everything I do,” Berkett said when asked how her being Jewish influences her outlook and choices. “Family, community, charity, honour, respect, curiosity and a commitment to learning are also central to who I am and the work I do.”

BODYTRAFFIC’s May 5 and 6 shows at the Playhouse start at 8 p.m. Tickets (from $35) can be purchased at dancehouse.ca.