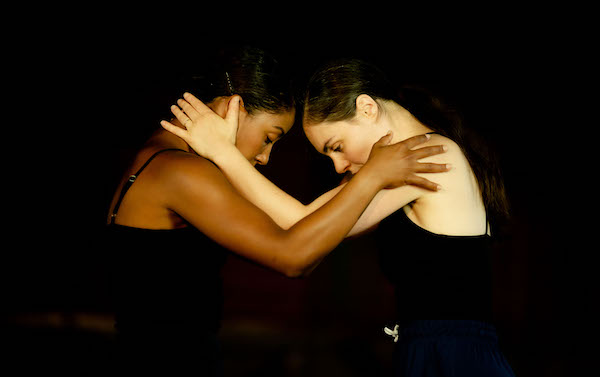 Next weekend, choreographers and dancers Livona Ellis and Rebecca Margolick will première their first collaboration, a duet called Fortress. The Dec. 17 and 18 performances at the Scotiabank Dance Centre also feature four solo works.

Ellis performs Unmoved, “a response to the idea of overcoming the limitations we place on ourselves,” and Margolick’s solo Bunker draws “on themes of memory and the shared history of previous generations of women.” The other two solo pieces were revived last season specifically for them: Peter Bingham’s Woman Walking (away) (1997), danced by Ellis, and Allen Kaeja’s Trace Elements (2000), performed by Margolick. (See jewishindependent.ca/albert-solos-reimagined.)

Both dancers have had the chance to perform for live audiences recently and both have been touring – New York-based Margolick internationally with her own work and locally based Ellis with Ballet BC, for audiences in Ottawa and Montreal.

“From these past two years of experiencing how quickly it can be taken away and experiencing how deeply I miss it when it’s gone, performing has a renewed sense of urgency and importance for me,” Margolick told the Independent. “I’m so excited to perform for a live audience here in Vancouver, especially because last year, when we were about to do this show for a live audience, on the day of the show, we had to switch to livestream only. A lot of energy has been built in this show over the past three years, and I’m looking forward to being able to share it live.”

While Margolick and Ellis have known each other for a long time, Fortress is their first duet together.

“Livona has always been one of the best dancers and performers I know. We trained at Arts Umbrella together all through high school, but, since then, we hadn’t danced together, until now. So much of collaboration happens outside of the studio and so, in a way, I feel like through our friendship and conversations over the past number of years, the work and ideas were already starting to form and it felt natural to transition to a studio together.

“At the time we decided to work together, I had been creating a solo titled Harbour, which was about my grandmother and my relationship to her both in life and death. One day, Livona and I had a conversation about it and she began talking about her grandmother. I was moved by this, and this conversation naturally spiraled into how we’ve started to see our mothers and grandmothers differently; how we see their influence on us; our desires to become mothers one day, being in our 30s now; how dance has changed for us, etc. The conversation was vibrant and honest and there’s a lot of history and love between us and I just asked if she wanted to create together, and she said yes.”

Ellis added, “One of the silver linings about the pandemic is that we both found ourselves in Vancouver at the same time…. I have always admired Rebecca’s work from afar but we’ve never been in the same place long enough to even begin to think about a collaboration. She was working on Harbour and we started speaking about our family and our grandmothers. This sparked the inspiration for Fortress. We were both doing a lot of reflecting during our various lockdowns and quarantines and found we were thinking a lot about who we are as artists and as women. How does our matriarchal lineage affect who we are today?

“We both feel like we are in a moment of change or transformation,” Ellis continued. “We can feel our experience settling in and grounding us in a way that allows us to move forward into the next chapter of our careers. This felt like the perfect jumping off point to create a duet.”

The pair started creating that work this past August 2021, with a residency hosted by the B.C. Movement Arts Society, rehearsing at the Athletic Hall in Sointula. “We are now working with composer Ivan Shopov from Bulgaria to develop the music, and Mimi Abrahams to develop the lighting,” said Margolick.

For Margolick, while both Bunker and Trace Elements haven’t seen any changes choreographically, “as time goes on, and as I evolve, they naturally do as well.”

“Especially for Trace Elements,” she explained, “it’s been a journey since I began working on it with Allen Kaeja. I started to learn more about Jewish history and specifically Jewish leftist and Jewish resistance history, both in the U.S. and Europe. Specifically, in Trace Elements, there is a spirit of resistance and remembrance in the work, countering the text we hear out loud, text of German propaganda and generational indifference to the history of the Holocaust. In that, I think about resistance fighters, countering the narrative that Jews went quietly towards death – they didn’t. That is a history we’re not often told of, and it’s been a part of my Jewish education to learn that history. The work is really spiritual for me and every time I perform it, I feel the spirit of those who fought and those who keep fighting and inspire me to as well.

“More recently,” she said, “I’ve been learning about Jewish women activists and fighters, especially women like Hannah Senesh, Faye Schulman, Bella Abzug, Emma Goldman, Anna Sokolow and others. I can’t really explain into words how this knowledge affects my performance, but I feel it, and it gives me a sense of grounding and inspiration.”

Margolick highlighted the Jewish Women’s Archive and Judy Batalion’s book The Light of Days: The Untold Story of Women Resistance Fighters in Hitler’s Ghettos as resources.

Bunker is also steeped in research. While she premièred the full-length version of the piece (titled Bunker + Vault, which runs 35 minutes) a few weeks ago in San José, Costa Rica, the December performances will include only the first 10 minutes of the work.

“A part of my research for this piece included looking through the archives of the Clara de Hirsch Home for Working Girls at the 92nd Street Y from the late-1800s to mid-1900s,” said Margolick. “The Clara de Hirsch Home was a place where young, poor, mostly Jewish immigrant women were housed and supported with educational resources as they found jobs and worked towards being able to support themselves. These archives were records kept by the staff, with observations and notes about the women who resided there. These observations gave me a window into the lives of the women who lived there, ranging from extreme hardship, repression, mental health issues, Jewish culture, camaraderie, acts of extreme kindness and on and on. Some of these women informed the movements, and spirit of resilience and care in the work.”