“With this award, we honor Joan Betty Stuchner’s life-affirming humor and encourage other children’s writers to laugh it up on the page the way she did,” reads the award website. The $1,000 prize will be given out once every two years to a Canadian author and/or illustrator who creates the most hilarious book for readers ages 12 and under.

“We feel that Joan would have loved this prize that supports authors who make children laugh,” said Cindy Heinrichs, one of the award committee members, in an interview with the Independent. “The name of the award is probably the longest and funniest book award name in literary history. Joan would love it. She would laugh at it, if she were alive. I can almost hear her laughing.”

Stuchner, one of the funniest authors of children’s books in Canada, passed away unexpectedly in 2014. She was only 67 years old.

“I met Joan in 2006,” Heinrichs recalled. “I edited one of her books, Honey Cake, for Tradewind. I was a young editor then, and Joan was very supportive. She had a knack for making everyone she met feel like they were her friend.

“We did become friends. Later, when she was already sick, I helped her with the final edits for her two latest books, Bagels the Brave and Bagels on Board [both illustrated by Dave Whamond]. I wasn’t working for her publisher then, I did it as a friend, because she was too ill to do it alone. It gave her a great deal of pleasure to complete these books and a great deal of satisfaction to know that they would find their way into the world. Both books were published posthumously by Orca Books.” 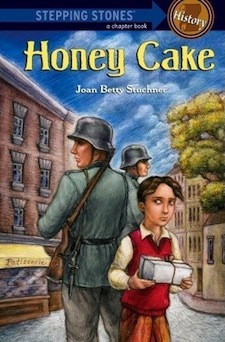 Heinrichs remembered how shocked all Stuchner’s friends were by her passing. “Joan was a wonderful friend, warm and generous. She loved children. She loved books. She was a little lady with a big personality and a great sense of humor.”

Born in England, Stuchner moved to Canada when she was 18. After graduating from the University of British Columbia, she worked as a library assistant, taught part-time, acted in community theatre and performed as a storyteller.

“My life is full of books … and my house is like a mini library – despite the fact that I moved in 2009 and had to give away many of my books. Not an easy thing to do,” Stuchner herself wrote in her bio.

She always liked to write, particularly for children. Her stories and poetry were published in children’s magazines before her first book, Peanut Butter Waltz, illustrated by Diana Durrand, came out in 1990.

“She wanted to write full-time,” said Heinrichs. “At 64, she retired to make that dream come true. Sadly, she died only three years later.”

After the funeral, several of Stuchner’s friends, including Heinrichs, got together to reminisce and to talk about Stuchner’s literary legacy, her funny and heartwarming children’s books.

“We realized that there was no prize in Canada for humorous children’s books. We thought, Joan would love such a prize, we should found one.”

They did. And, in honor their departed friend, they named the prize after her. The members of the award committee include Heinrichs, fellow writers Caroline Adderson and Silvana Goldemberg, and artist/ illustrator Kathryn Shoemaker. 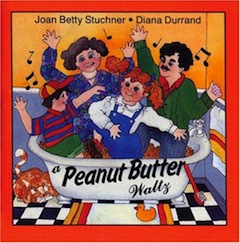 “We all met through CWILL BC – Children’s Writers and Illustrators Society of B.C.,” Heinrichs said. “When we started with the prize, we didn’t know what to do. Everything was a first for all of us, and everything was done by volunteers. There are no administrative fees. No paid staff. We asked people to help – to make a logo, to make a website, to help with fundraising, to donate books – and everyone jumped in. Orca and Tradewind donated books to raise the funds for the prize. Shar Levine is helping us with fundraising, too. She has so many amazing ideas, even though she is not a member of the committee.”

Submissions for the inaugural prize, which will be awarded in 2017, already have started pouring in, from publishers and writers organizations across Canada, although the committee decided not to accept submissions from self-published writers, at least for now. Heinrichs explained that decision: “While there are wonderful examples of self-published books for children, many self-published books are in need of a thorough editorial process. Most book prizes don’t accept them at this time, but that may change. Our prize is brand new and we are learning. We expect it will grow as we do.”

The Western Canada Jewish Book Awards are a new initiative of the Cherie Smith JCC Jewish Book Festival. The initiative is designed to celebrate excellence in writing on Jewish themes and showcase the achievements of authors residing west of the Ontario-Manitoba border. The awards aim to recognize the contribution to Jewish culture by these writers, and prizes will be awarded in several categories.

In the inaugural year of the awards (2016), books published in 2014 and 2015 will be accepted. A jury comprised of distinguished members of the literary community will examine the eligible submissions, which will be accepted until Feb. 29, 2016.

Currently, there are two other Jewish book awards in Canada. One is in Montreal, dedicated to writing in Yiddish, and one in Toronto. Although the book awards in Toronto are national, it is the JCC Jewish Book Festival’s hope that Western Canada-based awards will encourage more authors to enter books into competition. By being geographically based, one goal is to enhance the literary scene in Western Canada, which, for the intentions of this award, is considered as being from west of the Manitoba-Ontario border, including the northern regions, to the B.C. coast.

The submitting author must have lived in Western Canada for the past 12 months or have lived in Western Canada for at least three of the past five years. A book written by a non-Jewish author is eligible if in accordance with the following criteria. Eligible books contain significant Jewish content or theme; they are written by an eligible author (see above); they are written in English or are available in English; they are published in English or in English translation between Jan. 1 and Dec. 31 of the year of the award and the year previous to it; they have a 13-digit ISBN, including eBooks; and graphic books are eligible.

The books submitted will be judged by independent industry professionals. The jury will be comprised of five judges, including a chair, to be drawn from a larger pool including judges from all Western provinces. The winners will be announced by mid-April. An awards soirée and event will take place at a later date in the spring. There will be a monetary award of $2,000 for each winning author.

To submit a book for the award, download the form via jewishbookfestival.ca. Mail or deliver in person the following items for each book submitted: a completed entry form, five copies of the book and the $36 entry fee per prize category. Send the package to JCC Jewish Book Festival, attn: Dana Camil Hewitt, at 950 West 41st Ave., Vancouver, B.C., V5Z 2N7.

Masada Siegel, a journalist and media personality known as “The Fun Girl Correspondent,” has won silver in the Personal Comment category of the 2014 Lowell Thomas Travel Journalism Competition. The award, sponsored by the Society of American Travel Writers Foundation, is given “for outstanding print, online and multimedia works and for travel photography and both audio and video broadcast.” Faculty members of the University of North Carolina-Chapel Hill School of Journalism and Mass Communication judge the competition.

Siegel was recognized for her article “World Opens Up Solo,” published by the Jewish Independent.

The gold for Personal Comment went to Tony Perrottet, “Rich Tourist, Poor Tourist,” published by the New York Times; the bronze to Sean Carlson, “The Reach of a Single Village,” in the Irish Times; and an honorable mention to Christopher Solomon, “A Case for Getting Far, Far Away,” the New York Times.