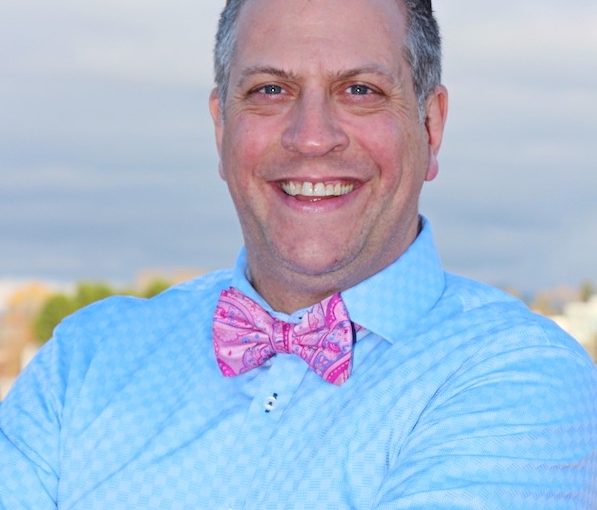 It is full steam ahead for Michael Sachs as he enters the home stretch of his first year as executive director of the Jewish National Fund of Canada’s Pacific Region.

“This has been the job of a lifetime. I really feel like this is something I have always wanted to do and had a passion for, and now, to actually be able to do it, it doesn’t feel like working,” said Sachs, who started at JNF on April 5, 2021.

Like anyone taking the helm of an organization, particularly during a pandemic, Sachs has had to confront some challenges and JNF has had to adapt and be nimble. For example, events such as the Negev Dinner, the black-tie fundraising gala that is ordinarily a premier item on the organization’s calendar, was one that might not play well in the virtual world. So, JNF switched course and focused on other ways to attain its goals. It collaborated with ALUT, the Israeli Society for Autistic Children, to help restore Jerusalem’s Aviv House, a half-century-old building in need of maintenance, accessibility and safety renovations. The facility allows its residents, all individuals with autism, to live semi-independently.

“It was, for JNF, a project to take on wholeheartedly. We can say it was a very successful campaign and we raised more money than we set out to,” said Sachs, who praised the efforts of honorary Negev Project co-chairs Penny Sprackman and David Goldman.

For Sachs, who arrived at JNF from the private sector, achieving such an outcome in his first year was gratifying. Prior to joining JNF, Sachs was vice-president of sales and operations for ERL Diamonds.

“I wanted to bring that business approach – that we are coming in and we are taking on a project and we are going to get it done in a good time frame and on budget. These are things that are really important to donors. They really appreciate that and it resonates very well,” he said.

Sachs, too, is constantly striving to connect the community with JNF. Much like a peacock, he said, the organization wants to show its feathers, as its range of projects has expanded considerably over the years. He sees JNF Pacific Region as educating the community on the range of issues with which JNF is involved, from the climate change solutions campaign it is running this year, to reinforcing shelters in Israel that are targeted by rockets – at the same time as supporting an organization for autism.

“The days of our grandparents’ JNF, of the blue tzedakah box, are not gone,” said Sachs. “But JNF has evolved and become so much more. We invest in water desalinization and social infrastructure, and this will create an opportunity for donors to see we are more than just planting trees. We want to do events with our community that allow the community to see JNF for who we are and allow us the opportunity to be in front of our community.”

A recent example Sachs highlighted is the Kids Got Talent project last Hanukkah, in which grade school students presented videos for a chance to win gift cards from Amazon. This initiative provided the opportunity for JNF to engage with a generation of younger parents, as well as their children.

Sachs is pulling out all the stops to reach every demographic. Active on social media, he may well be the only executive director of a Jewish organization on TikTok. “If we don’t engage younger people, there’s not going to be a future here for our community,” he said. “This group may not come to us, we have to go find them.”

On Feb. 28, JNF Pacific Region, along with PJ Library, Jewish Federation of Greater Vancouver, the Jewish Community Centre of Greater Vancouver and JCC inclusion services, are hosting Let’s Talk Neurodiversity, a panel discussion with teachers and mental health professionals. On March 31, together with Rise of the Comics, JNF will provide a means for the community “to laugh again” with an evening of stand-up they are dubbing “Jewish National Funny.” These are all vehicles, Sachs said, for JNF to showcase what it does in Israel.

Sachs is no stranger to community organizations. He has been president of the Bayit in Richmond and has volunteered with Jewish Federation, the Centre for Israel and Jewish Affairs, Tikva Housing Society and Kehila Society of Richmond, among others. In 2017, he was recognized with the Jewish Federation’s Young Leadership Award, as well as the Jewish Independent’s 18 under 36.

Sachs said the switch to heading a nonprofit has been immensely enjoyable. As he moves into his second year of steering JNF Pacific Region, his enthusiasm has not waned one iota.

For more information on what JNF Pacific Region is doing, visit jnf.ca/vancouver.