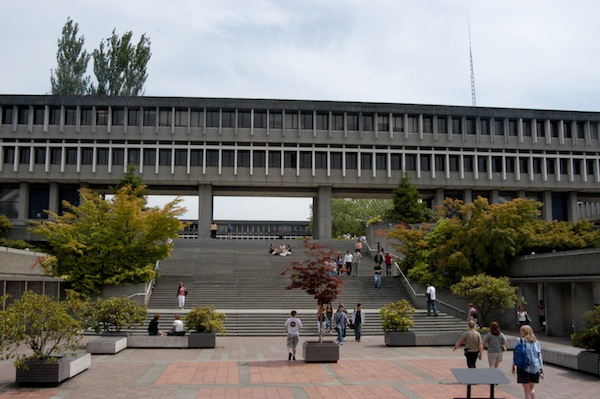 “Antisemitism is hate, and it is not acceptable at SFU,” said Simon Fraser University president and vice-chancellor Joy Johnson. (photo by Jeff Hitchcock / flickr)

The president of Simon Fraser University met with Jewish students recently and issued a statement condemning antisemitism on campus and directing those who experience anti-Jewish racism to appropriate resources.

After meeting with Jewish students, Joy Johnson, Simon Fraser’s president and vice-chancellor, tweeted on July 12: “Their experiences were deeply upsetting.”

“Antisemitism is hate, and it is not acceptable at SFU,” she added. “If you are experiencing discrimination or hate, help is available. Please reach out.”

The university, in consultation with the SFU Multifaith Centre and Hillel BC, created a resource for those who have experienced antisemitism. This includes links to campus chaplains, confidential counseling and critical incident support for significant events.

Like many university campuses, SFU has a history of anti-Israel activism that can often veer into antisemitic imagery and tropes. The latest eruption occurred at the first council meeting of a newly elected Simon Fraser Students Society. Occurring around the time of the most recent conflict between Hamas and Israel, the council meeting passed a resolution endorsing the boycott, divestment and sanction movement against Israel (BDS) in what Jewish students view as a biased and unfair meeting.

The student society’s resolution – titled “SFSS Response to the Israeli Colonization of Palestine” – accused Israel of “disproportionate violence,” claiming “worshippers at the Al-Aqsa Mosque were indiscriminately targeted by Israeli police forces” and condemning “the ongoing persecution of the Palestinian people by the government of Israel.” The resolution endorsed the BDS movement and expressed no parallel concerns about Palestinian terrorism, violence, incitement or human rights abuses. It also accused the United States and Canada of complicity in perceived Israeli misdeeds. The resolution passed unanimously.

The student society brought in Dalya Masri, a Palestinian activist, to provide “expert” testimony before the vote, said Katia Fermon, outreach coordinator for Hillel BC, the Jewish student organization.

“She gave a presentation, which was beyond hurtful for Jewish students,” said Fermon. Masri, she said, compared the First Intifada to the sort of peaceful rallies that happen on the streets of Vancouver.

“My students have family that died in the First and the Second Intifada,” Fermon said. “This is not a strange thing for us, and she just mentioned it like it was a rally.”

The presenter accused Israel of taking over territory in 1967, while eliding the larger facts around the Six Day War and other realities, she said.

Fermon said that, in preparation for the vote, the SFSS consulted with Independent Jewish Voices, but did not consult with Hillel.

“That fact is very hurtful,” she said. “Independent Jewish Voices is not a club on campus, however Hillel Jewish Students Association is. They pay their dues.… We are a part of that union. Those voices were not asked for or heard.”

Hillel BC issued a statement condemning the student society’s approach.

“Instead of supporting an open and extensive dialogue amongst students, the SFSS has chosen to perpetuate the agenda of a movement whose use of harmful terminology fails to address the root causes of the conflict, ignoring centuries of complex history in which power dynamics constantly shifted,” it reads. “This rhetoric further sows hate and division instead of helping work towards a peaceful two-state solution. The SFSS has decided to single out the state of Israel instead of opening a space for adequate dialogue between Jewish, Israeli and Palestinian students on campus wherein we may critique the policies of the state while being mindful of the hate that may result in endorsing certain statements, activists or movements.”

It added that BDS “openly traffics in antisemitic conspiracies and dog whistles” and noted that nearly two decades of BDS activism has not “freed Palestine from violence or oppression. Instead, it has been to stoke aggression and polarization online, in the streets and on campuses.”

In a statement to the Independent, Nico Slobinsky, director of the Centre for Israel and Jewish Affairs, Pacific region, said: “The statement by SFU’s president is an important step in denouncing the rising tide of anti-Jewish hate on campus. CIJA thanks president Dr. Joy Johnson for recognizing that SFU is not immune from antisemitism. Combating anti-Jewish hatred is not only about protecting Jews but also about protecting the very fabric of our society, on and off campus.

“CIJA appreciates the strong friendship and commitment shown by Dr. Johnson to creating a campus that is inclusive, diverse, safe and open to all students,” Slobinsky added. “CIJA looks forward to working with SFU alongside our campus partner, Hillel BC, towards ensuring a healthy campus environment.”

Students have been studying remotely for more than a year and so most of the discussion, which has included a litany of offensive comments, has taken place on official and unofficial online platforms, including the primary undergraduate forum.

One Israeli student, who asked to remain anonymous, said she was one of a few who spoke up in opposition to the prevailing bias in the dialogue.

“I didn’t expect it to go smoothly,” she said. “There was a lot of backlash in the moment and it is still going on.… A lot of comments are being deleted and monitored but there are a lot of hateful comments.”

The statements frequently included slogans such as “From the river to the sea, Palestine will be free” and other comments promising the annihilation of Israel. Israel was compared with Nazi Germany, Rhodesia, apartheid-era South Africa and plantation-owning slaveholders. Concerns about the safety of Jewish people were dismissed as efforts to “stifle” legitimate criticism of Israel.

“As an Israeli, I don’t want to believe they said them personally to me,” the student said. “I try my best not to take all those comments personally, but sometimes it gets there.”

As she and other students prepare to return to campus this fall for the first time in more than a year, she said she is not concerned for her personal safety, but she is worried about some of her friends.

“I was born in Israel and I have a little bit of Israeli inside of me so, for myself, I’m not that worried,” she said. “Obviously, it’s not a nice experience.” Whether the online threats and vitriol turn into real-time incidents remains to be seen, she said, but some of her Jewish friends are already taking cover.

“They are not wearing their Star of David,” she said. “They never say out publicly that they are Jewish: to not get into a conflict, to avoid any debate on the matter, they just decided not to. I think it’s a shame…. It is a shame that we live in Canada in the 21st century and people are choosing to hide part of their identity. For myself, it’s a big chunk of my identity, so I’m not going to hide it, but I can’t blame people who choose to. I empathize with them.”