As far as books go – especially books about the Holocaust – The Jewish Dog by Asher Kravitz (Penlight Publications, 2015), published in Hebrew in 2007, is certainly unique. The novel was awarded a citation by the Israeli Publisher’s Association and it is easy to understand why.

Kravitz is a Jerusalem-born physics and mathematics professor and photographer of wildlife. He has written three earlier books: two whodunits and a book about an Israeli soldier in an anti-terrorist unit. The narrator of this novel is a 12-year-old Jewish dog raised by a single mother (a dog, that is) in 1930s Germany. 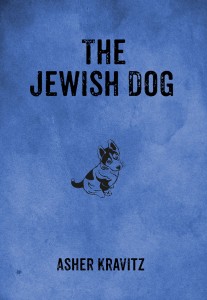 When he is born, his mother lives with the Gottlieb family. Despite the family conflict about keeping any of the puppies, when the dog finds the afikoman at the seder, Herschel, the family’s son, declares that the prize is allowing the dog to stay. They name him Caleb.

Caleb is an exceptional animal. He learns to decipher human speech and can read the moods of the adults.

As the story continues, Caleb witnesses the rise of Nazism and the laws being forced upon the family – the housekeeper prevented from working for the Jewish family; the children prohibited from attending school; and Jews forbidden to own a dog.

Caleb is given to a Christian family, where the wife mistreats him, and the story follows his adventures joining a pack, his training as a facility guard dog at Treblinka, and more. All the while, we read Caleb’s philosophical commentaries and are given a great deal of food for thought on human and animal behavior.

Kravitz has produced a well-written novel that is poignant and compelling. Some might say The Jewish Dog is for young adults, but anyone wanting to read a distinctive presentation of the pre-Holocaust and Holocaust period will find this book absorbing.

After reading and reviewing this most unusual book, I was prompted to ask the author some questions about this work. When I asked him what prompted him to this type of novel, Kravitz recalled that, as a high school student, he participated in an international quiz about the Second World War, which focused on the Holocaust. One of the anti-Jewish laws enacted by the Nazis was that “raising a dog is prohibited for Jewish families.” He also remembered the images of the signs posted on restaurant and coffee shop doors, “No entrance for dogs or Jews.”

“This is almost a built-in symbol of the Holocaust that connects dogs and Jews,” he said.

Kravitz also related a conversation that he had with an elderly survivor of Auschwitz, who had a deep understanding of dogs and had been a dog feeder in the camp.

The novel began its life as a short story, which Kravitz then expanded. It took more than four years to complete. He said that he studied “the behavior of my own two dogs in order to learn their mannerisms and reactions so that The Jewish Dog would narrate as realistically as possible as a dog.”

Kravitz did not expect the novel to become so popular. “I attribute [its success] to the responsibility I felt for the seriousness of the subject matter and also to the aid I received from the editor who worked with me throughout the writing process,” he said.

Another writer and director adapted the book into a one-man play, which ran in Tel Aviv for almost three years, and The Jewish Dog is now required reading for high school matriculation exams in literature. It has been translated into French, Turkish and English.