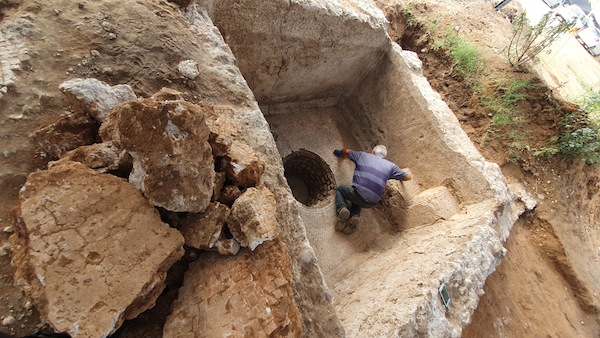 An Israel Antiquities Authority (IAA) excavation has yielded evidence of human activity in the Ramat Ha-Sharon region from as early as 1,500 years ago. The excavation was prompted by Ramat Ha-Sharon Municipality’s plans to establish a new residential neighbourhood south of a holiday park slated to be built on the outskirts of Tel Aviv.

“The excavation unearthed evidence of agricultural-industrial activity at the site during the Byzantine period – about 1,500 years ago. Among other finds, we discovered a large winepress paved with a mosaic, as well as plastered installations and the foundations of a large structure that may have been used as a warehouse or even a farmstead,” explained Dr. Yoav Arbel, director of the excavation on behalf of the IAA. “Inside the buildings and installations, we found many fragments of storage jars and cooking pots that were evidently used by labourers working in the fields here. We also recovered stone mortars and millstones that were used to grind wheat and barley and probably also to crush herbs and medicinal plants. Most of the stone implements are made of basalt from the Golan Heights and Galilee.”

One of the rare and unexpected finds retrieved from the excavation is a gold coin, minted in 638 or 639 CE by the Byzantine emperor Heraclius. On one side, the emperor is depicted with his two sons and the reverse shows a cross on the hill of Golgotha where, according to Christian tradition, Jesus was crucified. An interesting addition to the coin is an inscription scratched in Greek, and possibly also in Arabic. This is probably the name of the coin’s owner, who “marked” it as highly valuable property. According to Dr. Robert Kool, head of the IAA’s numismatics department, “The coin encapsulates fascinating data on the decline of Byzantine rule in the country and contemporary historical events, such as the Persian invasion and the emergence of Islam, and provides information on Christian and pagan symbolism and the local population who lived here.”

Another unusual find is a bronze chain that was used to suspend a chandelier containing glass lamp holders. Chandeliers of this type are usually found in churches.

Installations built at the site after the Muslim conquest in the seventh century CE include a glass-making workshop and a warehouse, where four massive jars were found. The jars, which were sunk into the floor, were evidently used to store grain and other products as a precaution against pests and damp conditions. “In this period, people were not only working at the site but also living there, because we discovered the remains of houses and two large baking ovens,” said Arbel. The pottery from this period includes complete pottery lamps for lighting, and local and imported serving ware, some of it decorated. Based on the assemblage of finds, the site continued to be inhabited until the 11th century CE.

Avi Gruber, mayor of Ramat Ha-Sharon, said, “I am thrilled by the finds and we have already started working with the directors of the Neve Gan North project on exactly how to integrate the current finds into the future neighbourhood…. As we plan heritage-related events for the upcoming centenary, this opens up a whole new perspective on how people once lived in this part of the country.”

“The Israel Antiquities Authority sees great importance in making the findings accessible to the public, in partnership with local and international communities,” said Eli Eskozido, director of the IAA.

“This is the first archeological excavation ever conducted at the site, and only part of it was previously identified in an archeological field survey,” added IAA Tel Aviv district archeologist Diego Barkan. “The Israel Antiquities Authority views this as an excellent opportunity to integrate the ancient remains into plans for the future municipal park.”