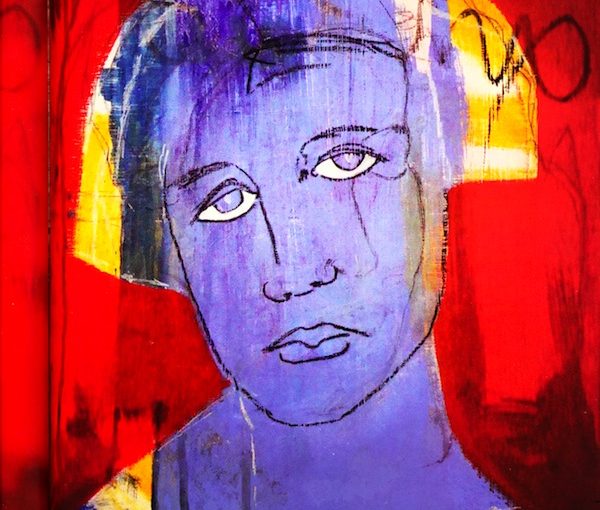 Olga Campbell’s acrylic painting “Remembering,” above, and bronze sculpture “Twins II” are just two of many artworks she includes in A Whisper Across Time.

Grief is many-faceted. Sometimes, we’re not even aware for what we’re grieving. One of the most beautiful passages in Olga Campbell’s A Whisper Across Time: My Family’s Story of the Holocaust Told Through Art and Poetry (Jujabi Press, 2018) is the following poem:

“I was born with a very deep sadness / a sadness and an anger / as a child I didn’t question this / it was the way it was / when I got older my mother had cancer / she died when I was twenty-two / I thought that my sadness was caused by her death / I had no idea that it was caused by her life.” 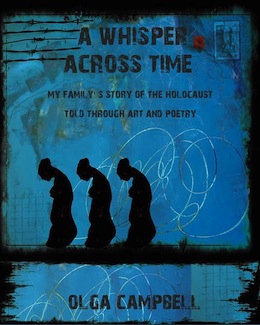 “A Whisper Across Time is a heart-warming, emotional journey that reminds us of the suffering and pain that war, intolerance and persecutions create, not only for those who had to endure atrocities but also for the children of the survivors,” notes Dr. David Lee Sheng Tin, author of two books on spiritual health and growth, in the foreword.

In A Whisper Across Time, Campbell gives clear voice to the whispers in her ear, “whispers across time.”

“This is the story of one family out of millions of families who went through the Holocaust,” writes the artist, whose mother lost all of her family during the Second World War. It is “the story of survival and death,” “of how trauma of such magnitude is passed from one generation to another to another….” It is also an ardent call for readers to remember Rwanda, Rohingya, Bosnia, Syria, Afghanistan, Sudan, Iraq, Cambodia…. “[O]ne of every 113 people on the planet is a refugee,” writes Campbell, noting, “by the end of 2016, there were 65.6 million refugees, asylum seekers and internally displaced people in the world” and that “racism, antisemitism and ultra-nationalism are on the rise.” She pleads, “eighty years ago, the world looked away / we must not look away now.”

In an interview with the Jewish Independent last November about the exhibit of the same name that helped launch the book, Campbell updated that statistic. “Our world is a chaotic place right now, somewhat reminiscent of the period before the war,” she told writer Olga Livshin. “There are over 68 million people around the world that are refugees or displaced. My book is not only about my family. It is a cautionary tale. It is about intergenerational trauma and its repercussions across time.” (See jewishindependent.ca/whisper-across-time.)

In 2005, Campbell mounted the exhibit Whispers Across Time. “This art show dealt with memories and losses,” she writes in the book. “Many of the pieces in the show were fragmented, partial in appearance, reflecting both a presence and an absence.”

The exhibit featured masks, rusted metal figures, ceramic sculptures, photographs, mixed media and texts that, explains Campbell, “echoed the same theme of loss and regeneration – a life spirit which emerged from the devastation of the past.” Even reduced in size to fit on the pages of a book and taken out of a gallery setting, this artwork is powerful.

In A Whisper Across Time, Campbell shares some of what she has discovered about her mother, Tania, and father, Klimek Dekler, as well as about her maternal grandmother, Ola Akselrod, and her mother’s identical twin sister, Mania, and brother-in-law, who was also an identical twin, but Campbell hasn’t been able to determine which brother – Manasze or Efraim Seidenbeutel – her aunt married. Campbell recounts how her parents met, the atmosphere leading up to the war, and how her parents survived. Her father’s family also survived. There are no records, says Campbell, of what happened to her grandparents or her aunt during the Holocaust; the Seidenbeutel brothers were murdered at Stutthof concentration camp, a few days before it was liberated.

“My mother must have been completely traumatized by her experiences and her losses,” writes Campbell. “She lived and worked and loved, she still danced … sometimes. But the joy in her heart was not so big. The light inside was dim. And, at night, when she was alone in her room, she cried.”

In A Whisper Across Time, Campbell also talks about preparing for the 2005 exhibition, and some of the strange happenings that occurred, such as how multiple attempts to photograph the art failed – a broken camera, saved images that wouldn’t open on the computer. Her use of language, both in poetry and prose, is emotive without being overly sentimental. And her artwork evokes an emotional reaction, often involving some sadness and always demanding contemplation.

For more on Campbell and to purchase A Whisper Across Time, visit olgacampbell.com.